Skip to main content
Some Mohawk people have learned to speak Mohawk by growing up among fluent speakers. Many others are trying to learn to speak Mohawk in school or in university. Having some knowledge of linguistics can make learning a second language easier in some ways. 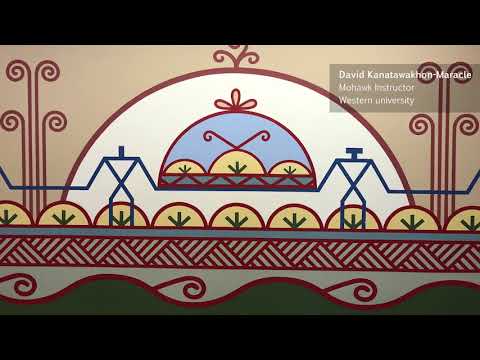 A YouTube element has been excluded from this version of the text. You can view it online here: https://ecampusontario.pressbooks.pub/essentialsoflinguistics/?p=227

One of the things about language is — I understand Mohawk and I speak Mohawk because I’ve heard hundreds of people speaking it.

[CA: Right. So that’s how you learned it, was growing up in the community where it was spoken?]

Yeah I basically grew up with Mohawk and English and as I got to be a teenager I spent a lot more time with the older folks because they were more inclined to be speakers. Also, I find old people a lot more entertaining than younger adults, you know, they no longer have the sort of worries that, and the stress, that younger people have. And the stories, I mean, the really funny thing is that I find with older people, with the old folks, they’re not very trusting, you know you basically have to visit them a lot before you kind of crack that shell and you get access to, to what they what they know. And I suppose to a certain degree that’s self-serving but at the same time these people have got, they’ve got tradition to pass on; their responsibility is to be passing on this stuff and if they’ve decided that well nobody wants to hear that you know and so they stop telling it then it, it dies with them. So I found that spending a lot of time with the older folks you hear a lot of stories.

And the funny thing too about, one of the things that I found with the language is they were a lot more fun in Mohawk than they were in English. They get cranky and grumpy and unhappy when they speak English and I don’t know why because, it just, I had an uncle used to visit and, well, boy I mean this he had a complaint about everything he had a gripe about everything and stuff and it always seemed to be so grating in English but when he was speaking Mohawk we spent a lot more time laughing. Because that was the language of his childhood and that was how he grew up and he’s, you know, he would tell stories from that time where it’s often you know were, were a lot more amusing or a lot more interesting than what he was having to deal with presently in English.

I’ve had students that have come in that have taken a number of years in the immersion program at Six Nations. They seem to have a sense of the language but they’re not speakers. The course that I teach right now is a fairly heavy grammar-based course because I find that if I mean you can you can learn all the vocabulary you want, but if you have no sense of the grammar of the language, how are you going to utilize that vocabulary? What are you gonna do with it? And the thing is that the students that have come in that have some language, they know a lot of vocabulary… can’t do a thing with it! They know how to say expressions; they know dialogues; they know a whole lot of things that I find is, okay, great, so you at least know the pronunciation, which is a good place to start. Anglophones can’t get past what they see written. “Well, but that’s a ‘t’ it’s written as a ‘t’.” I says yeah, it’s pronounced [d].

[CA: And here’s where, actually, thinking of my students the having a bit of Introduction to Linguistics would help to say, well, look, this is a, this is an allophone and it’s voiced in these circumstances and voiceless here, someone who has Intro Linguistics might get that.]

Yup. I had students who will comment on the fact that they’ve taken a linguistics course and it has helped their pronunciation it does make them more aware of it. […]