Skip to main content
Dr. Kanatawakhon-Maracle has developed his Mohawk textbooks and exercises over his many years of teaching Mohawk, but when he started teaching, there were very few books or materials available. In this unit, we talk about the kind of linguistics work that can be helpful in creating textbooks and other teaching materials. 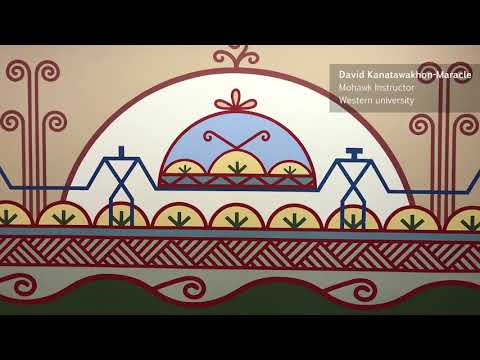 A YouTube element has been excluded from this version of the text. You can view it online here: https://ecampusontario.pressbooks.pub/essentialsoflinguistics/?p=231

Over the years I’ve been teaching Mohawk since ’91 … ’90-91 and I wanted to, I initially taught the course here, got the opportunity to teach the course because I wanted to see if the text material that I had developed for a language course would actually work. So I had developed a textbook and we used it the first year in that language course — mmmyeah, it did — as I modified it and I did things to it. That one sitting there that’s the most recent within the last five years. There is an audio that goes with that on a USB stick. That’s just the teaching text; there’s another one that’s called Supplements and it’s divided into ten, ten supplement areas, where you’ve got everything about numbers, everything about locations, everything about… And it’s equally as thick as that…

And then the band council back home, they finally got the opportunity to offer the Mohawk language in the public school there, so they wanted me to come home and teach it because I was quite literally the youngest speaker there and we didn’t have a lot of old folks in the community to draw on. So I said okay fine, I’ll, well I went back home and of course they said, “Okay there’s, here’s the Eastern school, here’s the Central School, here’s the Western school and then here’s the main school one, Grades 1, Grade 2, Grade 3 and then 4 to 8 and I drove to each one every day for a half an hour, about a half an hour of language in each one, sometimes 40 minutes. So my first year of teaching was Kindergarten to Grade One — Kindergarten to Grade 8, you know of course having to deal with an attitude all the way through, worst at the 7/8 level because they started to be a lot more like their parents, and a lot more annoying. And then your little guys you know, just soaked it all up and were a lot of fun.

But then, the band council says well here’s, here’s your job, here’s where you’re teaching, and here’s a hundred dollars a week. (laughter) No materials whatsoever, so I bought, I had to buy any materials that I needed for flashcards, for doing things within the class to help the kids learn and that sort of thing but one thing that there wasn’t was a textbook. There was, there was no available materials that they were using and that was pretty much everywhere, so you pretty much had to develop your own material so I started doing more and I got thinking well the language is a lot more than just words. And there are a lot of words that seem to be very much the same.

I taught for five years and about the fourth year came across this book published by Günther Michelson called A Thousand Words of Mohawk and it was all about the roots. And I bought a copy of this thing and I started looking at it, “Oh, wow, this makes so much sense.” So then I started, well maybe that is the better way to teach the language course.

[CA: So he had done the linguistics research to assemble the roots?]

Yeah, he was a linguist himself and of course, a lot of the linguistic work done on Iroquoian languages at the time was for the most part unreadable. (laughter) I didn’t have the education to deal with all that sort of weird and wonderful vocabulary. If I got a book, I had some linguistic stuff on the language, but as long as it provided enough examples that I could, then I could figure out what they were talking about … but … I really needed to have the examples. So I started doing his stuff and then gradually working this into, to doing the class, classroom stuff.

[CA: So it sounds like there could be a valuable role here for people who may not have, who may not know languages, Indigenous languages but know some linguistics to work with speakers of the language to create materials?]

Oh yeah, I think, if they, and if they’re going to be working with speakers they really do have to be somebody who has a sense of the grammar of the language. One of the things I learned how to do by trial and error was, learned how to ask the right question. Because speakers will tell you what comes to their mind. So we say, well what’s the word for “tree”? “Oh, kerhitáke“. Okay, eventually I learned that means “on the tree”. Kerhitákon, eventually I learned that was “in the tree”, and then, you know, they would give me all of these, tkerhitoke, “There’s a tree standing there,” and eventually I figured out that, kérhite was the word for “tree”. Oh, yeah, yeah, you’re telling us kérhite, yeah, that’s “tree”. (laughter)

And, and the business of using pronominals — we have a subjective, objective and transitive, and they would mix them. Now this is a problem that was happening in the, in the language programs in the schools, is because the fluent speakers were suddenly, oh Aunt Maisie there, she’s a fluent speaker. Yeah, she’s 85 but she can teach these kids — what a horrible thing to do to an old woman (laughter) — but anyway, she could use the money, so. But the thing is that she had, as a fluent speaker she had no sense of the grammar of the language.

[CA: Yeah, that’s something that my students in, in first-year linguistics struggle with making this, this unconscious implicit knowledge about how their language works and making that explicit. It’s a real challenge. Whatever, I mean, we mostly do it in English but whatever your native language is, it’s hard to become conscious…]

Yeah, so learning – learning to ask the right question, you know and, even when, when doing a sentence, you really have to pay attention to, to how they’re organizing the sentence, how they’re putting it together, and even though when they would say things, I would, “yeah, yeah, I know”. I have a sense of what they were saying, but (laughter), it just, sometimes it was so confusing, sometimes very frustrating, sometimes you would ask three or four different speakers the same thing and they would all tell you something different. Is it because there are four ways to say the same thing or is it not really the same thing but simply refers to similar situations?

Now, I mean, that, that textbook there is all about the grammar of the language — what you use where, how you organize it, what you say when, and stuff.

[CA: And it’s over your years of experience that you’ve assembled…]

Yeah. Over the years I’ve written five different language learning textbooks complete with, with exercises, drills and all the sort of stuff. That also has a book of exercises and drills to go with it. The difference is that is on, on audio, so it’s … you can, you’ll find the exact same textbook on screen which you can highlight the audio and get a pronunciation.