We can look at signs and sign systems in three ways:

To explore this, lets look at a very familiar yet very arbitrary sign system – traffic lights. 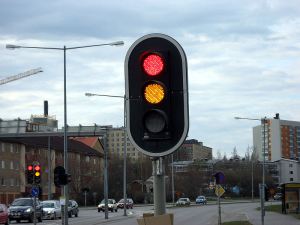 If semantics is the ‘how’ of semiotics, concerned with the relationship between signifier and signified, how might we read semantically the traffic light? We might read red as stop, and green as go.

And finally, if pragmatics is the relationship between sign and reader, how might we pragmatically read the traffic light? If the light is red, for example, we know to stop.

The last useful concept from basic semiotics that is worth mentioning is the idea of syntactic indeterminacy (Messaris, 1994). Syntactics is the formal relationship between signs and sign systems. But as we’ve noted, sign systems are constantly changing and evolving, with the arbitrariness of the relationship between signifier and signified creating a kind of ‘wriggle room’ for meaning to change and evolve within context. This flexibility in meaning creates space where a sign that means one thing to me might mean something slightly or significantly different to you. Very savvy advertisers often exploit this syntactic indeterminacy to encourage audiences to draw their own meanings from a number of possible interpretations, or to imply rather than overtly state a message (which may turn off the ad’s target audience), as this classic New Zealand ad for ‘Instant Kiwi’ lottery products demonstrates.

We each develop different interpretations of advertisements, or any set of signs, based on our own experience, interpretation and frame of reference. One way to think about the interplay of these factors when looking at signs is to use a semiotic triangle (Ogden and Richards, 1923). Ogden and Richards (1923) The Meaning of Meaning

There are a number of different versions of this triangle, and you will sometimes see different labels used at each of the points of the triangle (though they might be a different points, they are the same in relation to each other). But generally speaking, there are three main points to the triangle. The first point is the reference, the second is the sign (or sometimes the expression), and the third is the concept. Some versions also put in the centre of the triangle the actor or agent who makes these connections through experience.

This leads us to thinking about semiotics as part of the process of communication.

Morris, C. Foundations of the Theory of Signs, University of Chicago Press, 1938.