Grunig developed a situational theory of publics to explain and predict why some publics are active and others are passive. Within the stakeholder categories he notes that situational theory can identify which publics will “communicate actively, passively, or not at all about organizational decisions that affect them.”Grunig (2005), p. 779. 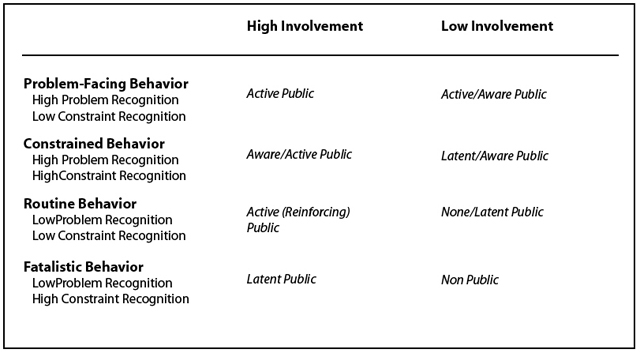 Source: Rawlins (2006) adapted and used with permission from Grunig.

Level of involvement is measured by the extent to which people connect themselves personally with the situation. However, people do not seek or process information unless they recognize the connection between them and a problem, which is the level of problem recognition. Whether people move beyond information processing to the information seeking behavior of active publics often depends on whether they think they can do something about the problem. Constraint recognition is the level of personal efficacy a person believes that he or she holds, and the extent to which he or she is having an impact on the issue is possible. Those who think that nothing can be done have high constraint recognition and are less compelled to become active in the resolution of the problem. Another consideration, referent criteria, is the guideline that people apply to new situations based on previous experiences with the issue or the organization involved.

Active publics are likely to have high levels of involvement and problem recognition, and lower levels of constraint recognition. Because they recognize how the problem affects them and they think they can do something about it, Grunig theorized that this public will actively seek information and act on that information. Aware publics will process information and might act, but are limited by lower levels of involvement and problem recognition, or higher levels of constraint recognition. Latent publics are not cognizant of how an issue involves them or don’t see it as a problem. They are simply not active on the issue. This public could become active or aware as information changes its cognitions about the issue.

Grunig tested the theory using problems that would create active and passive publics. He found four kinds of publics: 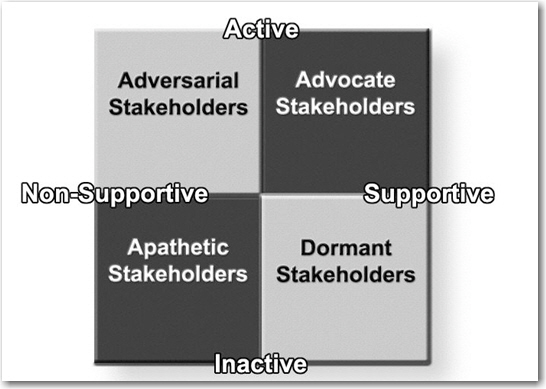 Once strategies have been developed that address the stakeholders, there is one last prioritization step. According to Wilson, there are three types of publics involved in communication strategies: key publics, intervening publics, and influentials.Wilson (2005). Key publics are those whose participation and cooperation are required to accomplish organizational goals. In relation to the first two steps, they are the stakeholders who have the highest priority according to their power/dependency/influence attributes, the urgency of the issue, and their level of active involvement in the issue. In Grunig’s model, the key publics are called priority publics. To communicate effectively with these stakeholders, an organization must understand them as much as possible. Priority publics can be profiled by their demographics, lifestyles and values, media preferences, cooperative networks, and self-interests. Effective strategies appeal to the self-interests of the priority publics and reach them through the most appropriate channels (as discussed further in Chapter 9).

Influentials can be intervening publics, but they also affect the success of public relations efforts in other ways. Influentials can either support an organization’s efforts or work against them. Members of some publics will turn to opinion leaders to verify or refute messages coming from organizations. The opinion of these personal sources is much more influential than the public relations messages alone. Therefore, successful campaigns must also consider how messages will be interpreted by influentials that act as either intervening or supporting publics.