Although the social implications of race or ethnicity in the United States have eroded over time, this does not mean that that is no longer relevant. It also does not mean that ethnicity is not relevant anywhere else. In many places, it is still very important. In much the same way as race defined the early United States, it defined South Africa, Brazil and other settler colonies. There were important differences between these places. Whereas white people who made up the racial majority ruled the United States, South Africa was ruled by a white racial minority. In order to preserve power for themselves, South African whites developed a system known as apartheid, which divided the population into a number of legally-defined categories. Similar to the U.S. development of Indian reservations, the South African state also developed ethnically-based “Homelands” which were used as a means of denying citizenship to black South Africans.

Sustaining such a system required the use of a police state that eventually became unsustainable. In 1994, full and open elections were held, and the black majority gained political power. The state policy of separating people ended, but this did not immediately transform South Africa into a new kind of state. It has continued to negotiate the relationship between the outside world and internal political and economic struggles between differing factions in the country.

Brazilian society was far more racially mixed from the beginning. This simply changed the social equation from a binary black/white relationship to a society stratified by skin tone and migration status. As was the case in many colonies, people born in the colonizing state (in this case, Portugal) continued to enjoy elevated social standing well after the colonial era ended. In the same manner of the United States and South Africa, social standing was related to being part of the charter group.

In other places, purely ethnic differences have had violent consequences. In the 1990s in Rwanda and in Yugoslavia, ethnic tensions flared into open warfare and genocidal massacres. A new term was coined—ethnic cleansing—which denoted an attempt to complete expunge traces of another population from a place. In both of these places, it would have been difficult for an outsider, and sometimes even a local, to tell the differences between the two groups. Remember that ethnic differences can be based on historical groups that may now be very similar.

It should be noted that the massacre of opposing ethnicities and the appropriation of their territories was not a product of the twentieth century. The colonial phase of world history was largely defined by the massacre and marginalization of indigenous people around the world by people of European descent.

Some countries have only one ethnicity and are called nation-states (remember that an ethnicity can also be called a nation) Most places are not like this and contain many ethnicities. Some ethnicities are minorities solely by a political boundary. Many groups have found themselves on the wrong side of an imaginary line. Sometimes this is due to outside forces imposing a boundary, for example the Hausa in Nigeria and Niger, but sometimes it is a product of state creation itself. When the state of Germany was created, there were pockets of ethnic Germans scattered all over Europe. It would have been impossible to incorporate them all, since they were spatially discontiguous.

In the former Union of Soviet Socialist Republics (USSR), attempts were made to make political boundaries match ethnic boundaries. Kazakh people had the Kazakh SSR, Uzbek people had the Uzbek SSR, and so forth. It was an idea based on ease of administration, but it wasn’t based on the actual distribution of the ethnic groups. The distributions were far too messy to draw clear, neat lines between them. This didn’t matter as long as the USSR was still functioning, but when it collapsed, it created another landscape of minorities on the wrong side of a boundary. Irredentism is when your ethnic group has people on the wrong side of a boundary, and it’s necessarily destabilizing. The following chapter on political geography will go into greater detail regarding this, but suffice it to say that splitnations do not like being split.

Some ethnicities are numerous, but find themselves minorities in several countries. Kurds, Balochs (Figure 7.8), and Sami are all nations who are distributed across several countries. Such groups often harbor strong desires to create their own independent political entities to the detriment of currently existing states. 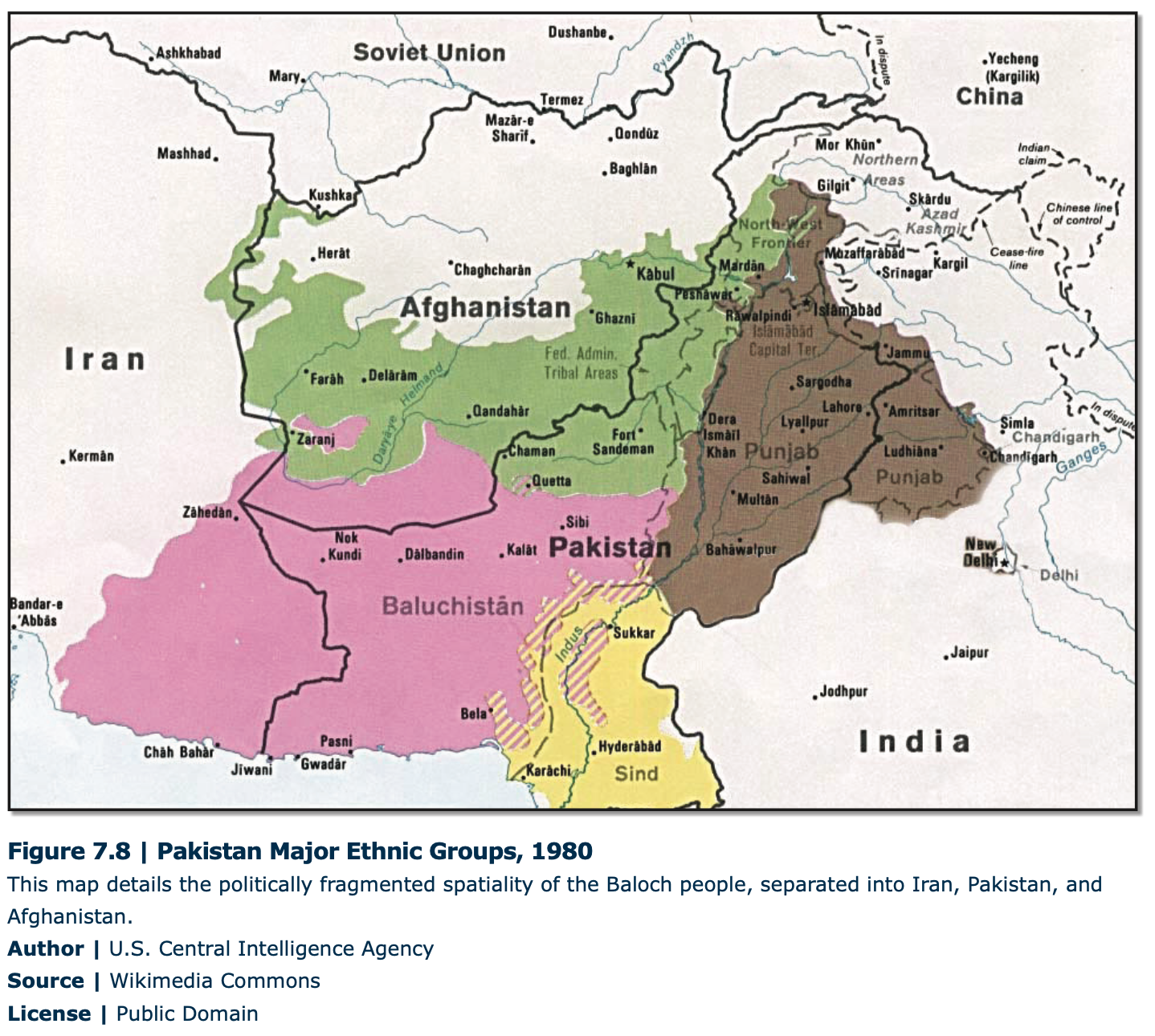 As places unify politically and develop industrially, ethnicity often declines. Moving populations into cities and stirring them around in schools, militaries, and jobs fosters intermarriage and acculturation to the larger, national norms. Rural places tend to be more diverse, and somewhere like Papua New Guinea is probably the most diverse, due to the fact that smaller villages still predominate. Somewhere like South Korea, which was already relatively ethnically homogenous, has become almost fully so due to economic development.

Diversity in developed countries is often promoted as a self-evident benefit, but there are some downsides to increasing diversity. Studies have shown that ethnic diversity decreases political participation. This is likely due not only to factors such as difficulties in communication, but also simple mistrust of other groups of people, known as xenophobia. This mistrust can apply to all parties in the relationship. There are places in the world with very low levels of diversity. South Korea, Japan and Finland are all highly productive economies with very little cultural or ethnic variability and high levels of social cohesion.

There are benefits to diversity. Aside from the benefits to genetic diversity (a reduction in recessive-gene disorders) ethnic diversity opens citizens to a wider range of experiences. Without pizza, sushi, tacos, stir-fry, or hamburgers, the United States would be a cultural wasteland forced to subsist on our British inheritance of boiled lunch and steak and kidney pie. Diversity has made our lives more pleasant, and it has made our ability to relate to others broader.

In many ways, the impact of immigration on the ethnic fabric in Europe is the same as it has been in the United States. Due to the relative strength of their economies, European countries have been receiving large numbers of immigrants for some time. These immigrants are usually culturally distinct from the host population. In many instances, the immigrants come from places that had previously been colonies of European powers. The increase in immigrants with backgrounds dissimilar to the host country has triggered a rise in nationalistic or xenophobic activities, and in some places, a rise in political parties dedicated to reducing immigration or even repatriating current immigrants. The separate category of guest worker has created an even more complicated ethnic relationship. Guest workers are temporary workers who are contracted for a set period of time with the understanding that they will leave when the period of work has ended. By and large, that is not what happens due to the economic realities of short-term employment. People are reluctant to return to poverty.

Different places have different conceptions of ethnicity. In the United States, we separate race from ethnicity, and we have exhaustive lists of ethnicities collected by the census. France collects neither racial nor ethnic data, under the belief that every French citizen is ethnically French. This doesn’t include linguistic minorities such as the Bretons, the Basques or the Alsatians, all of whom are indigenous to France and whose ideas about their own ethnicities are different from that of the state.

In other places, ethnic identity is the most significant impediment to state cohesion. In Nigeria, no less a person than Nobel Prize winner Wole Soyinka wrote,” There is no such thing as a Nigerian.” He wasn’t saying that Nigerians are a figment of the imagination. He was stating that in his country, few people would identify first as a Nigerian, but instead as Igbo, Yoruba, Hausa or many others. This is another concept that will be addressed in the next chapter.