The fundamental unit of political space is the state, and this type of state is different than the states that make up the United States. A state is basically synonymous to a country and represents a formal region in which the governmenthas sovereignty or control of its own affairs within its territorial boundaries. The number of states in the world is currently 196, but this number changes through military conquests or the devolution, or breakup, of states. For example, the United Kingdom has devolved over the past 70 years as the Republic of Ireland has broken away from the UK, and a new referendum may occur in the next few years to decide whether or not Scotland will become independent. Another prime example of the creation of new states occurred after the breakup of the Soviet Union, when fifteen states were created in Eastern Europe. Even a terrorist group, the Islamic State, has tried to establish its own state in portions of Syria and Iraq, even though their legitimacy is not recognized by the international community.

States in which the territorial boundaries encompass a group of people with a shared ethnicity are known as nation-states. These states are generally homogeneous in terms of the cultural and historical identity of the people, and these groups of people are referred to as a nation. A few current examples of nation-states are Japan, Finland, and Egypt. Nation-states are actually in the minority compared to multinational states, which are states that have more thanone nation within their borders. With international migration being a significant phenomenon worldwide, more states become multinational. In contrast, some nations exist but do not have their own state, and those nations that desire to become nation-states are known as stateless nations. In the United States, a prime example of stateless nations are the many Native American tribes scattered throughout the countries. Other examples include the Palestinians living in Israel, Syria, Lebanon and Jordan, and the Kurds found in Iraq, Turkey, Syria, and Iran (Figure 8.1). Both the Kurds and the Palestinians are actively seeking statehood, but serious obstacles must be overcome because the countries where they live are reluctant to grant them independent territories. 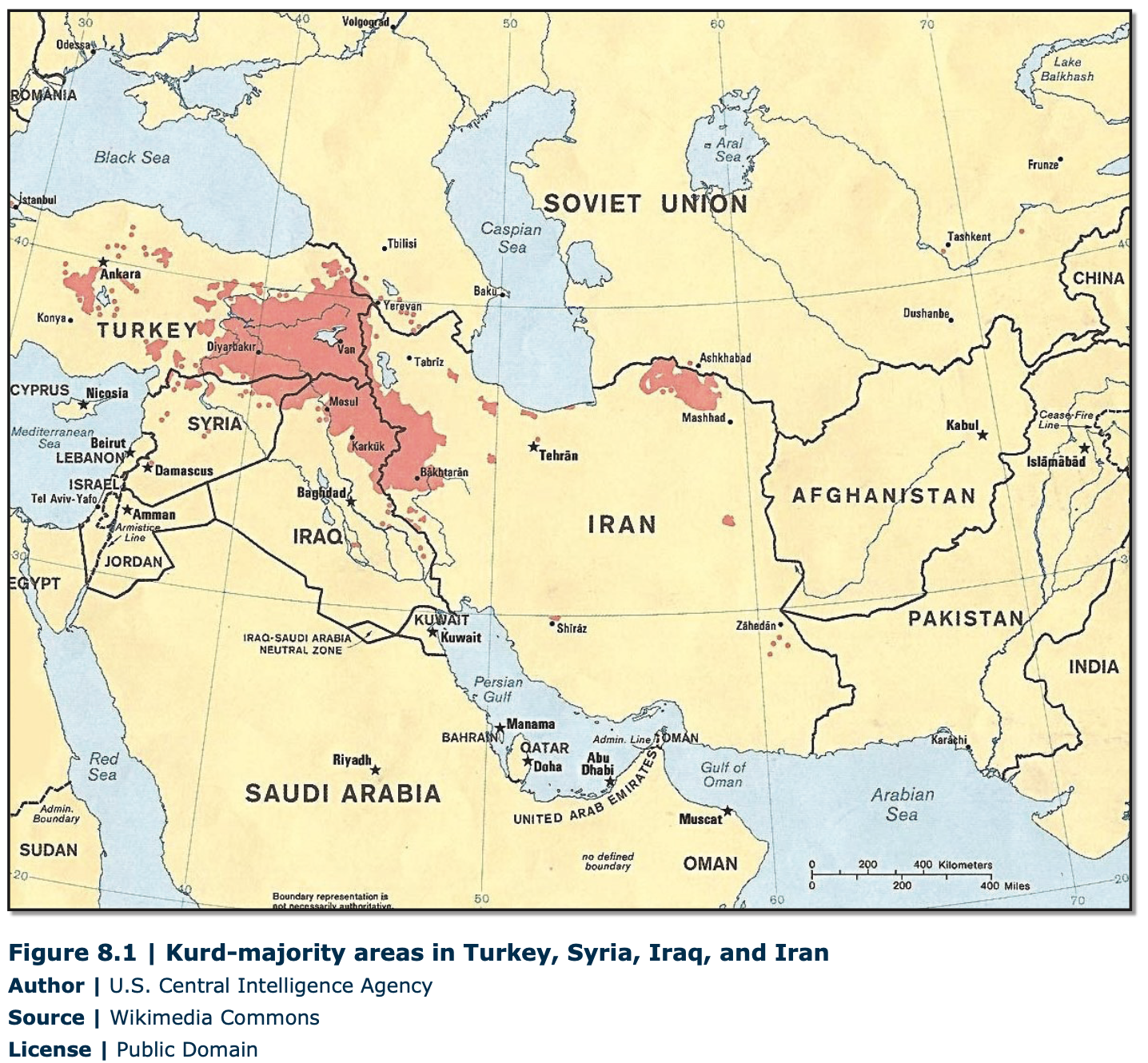 The compactness of a state is related to the shape of a state, and a compact state is one that is ideally circular in shape, where the distance from the center to any border is roughly equal. In contrast, a fragmented state is one that is discontinuous in nature and may consist of a number of islands. A few examples of fragmented states include Indonesia and the Philippines. Indonesia consists of over 17,000 islands, and in order to increase the solidarity of the state, the government actively encouraged migration to less populated islands in order to assimilate indigenous populations. In the Philippines, control of its southern islands such as Mindanao is problematic because of terrorist groups that are active in those areas.