Do all countries follow a similar pattern of development over time? This is a simple question that does not have a simple answer. Just as different people each follow different career paths, depending upon their own unique talents, strengths, and weaknesses, the same is true of countries. While the Asian Tigers have successfully demonstrated the power of embracing an export-oriented economy, countries like Brazil, Jamaica, and South Africa have also embraced global trade but failed to achieve similar results in spite of grand efforts and reforms. Nonetheless, the dominant and consistent advice from Western countries (in the Global North) is for poorer countries to reject protectionism in favor of trade and globalization. Much of the debate is informed by economic theory that argues that the more we trade with one another, the more stuff there is for all of us – and who doesn’t want more stuff, right? A leading proponent of trade was an American government official named Walter Rostow, who developed a model known as Rostow’s Stages of Growth in 1960. He argued that countries historically follow a similar and predictable pathway to wealth and stability and that each country is in one of the 5 stages of growth described below:

Rostow’s ideas represent the concept of modernization theory, which is the widely held belief that, with the proper intervention each country will pass through a similar pathway of development. Modernization geography recognizes the large disparities that exist from one place to another across the globe and represents an attempt to bring prosperity to places that have been left out or left behind. The goal to address such differences worldwide represents a shift in scale from one in which each country looks after itself to a new paradigm in which wealthy countries felt a keen responsibility to ‘bring’ development to those across the world, in what’s been dubbed the ‘development project’. The best evidence of this global effort can be seen in the Millennium Development Goals, which were a series of 8 measurable outcomes decided upon by 189 world leaders in 2000 that were to be achieved by 2015. Although not all of the goals were achieved, significant progress was demonstrated across most of the 8 goals. Much of the progress, however, has been found in Asia – most notably in China, where nearly 200 million people have left farms and moved to cities to work in manufacturing jobs, which pay far more than what they could earn as farmers. Critics of Rostow’s model point out that it doesn’t account for geographic differences, historical variations, or the long-standing effects of colonialism and they also argue that the model is more of a political document (critical of communism and triumphant of capitalism) than it is a serious economic blueprint for success. Nonetheless, efforts have been spearheaded by Europe and North America to jumpstart all economies of the world into action, so that all can eventually reach the age of high mass consumption. Can you identify any problems with this model? Is it possible for all countries of the world to live in a state of high consumption? Why or why not?

What do you think might be the biggest obstacle to development by poor countries today? It’s the same obstacle that keeps you from going out to dinner every night – MONEY, of course! But the kind of money we’re talking about in this case is not available from a regular bank. For that reason, the World Bank was formed in 1944 to provide funds to countries for the purpose of large development projects. For example, a World Bank loan financed the construction of the Tarbela Dam (1977) – see Figure 9.10. One of the largest in the world, the structure facilitates irrigation, helps to control flooding, and (most importantly) provides significant amounts of hydroelectricity to the region in Pakistan along the Indus River. Such projects are often controversial, however. During its construction, the dam displaced 120 villages and many claimed to have never received the compensation they were promised. Similar projects can be found all over the world, and most of them are designed to improve people’s daily lives while also greasing the wheels of global commerce. 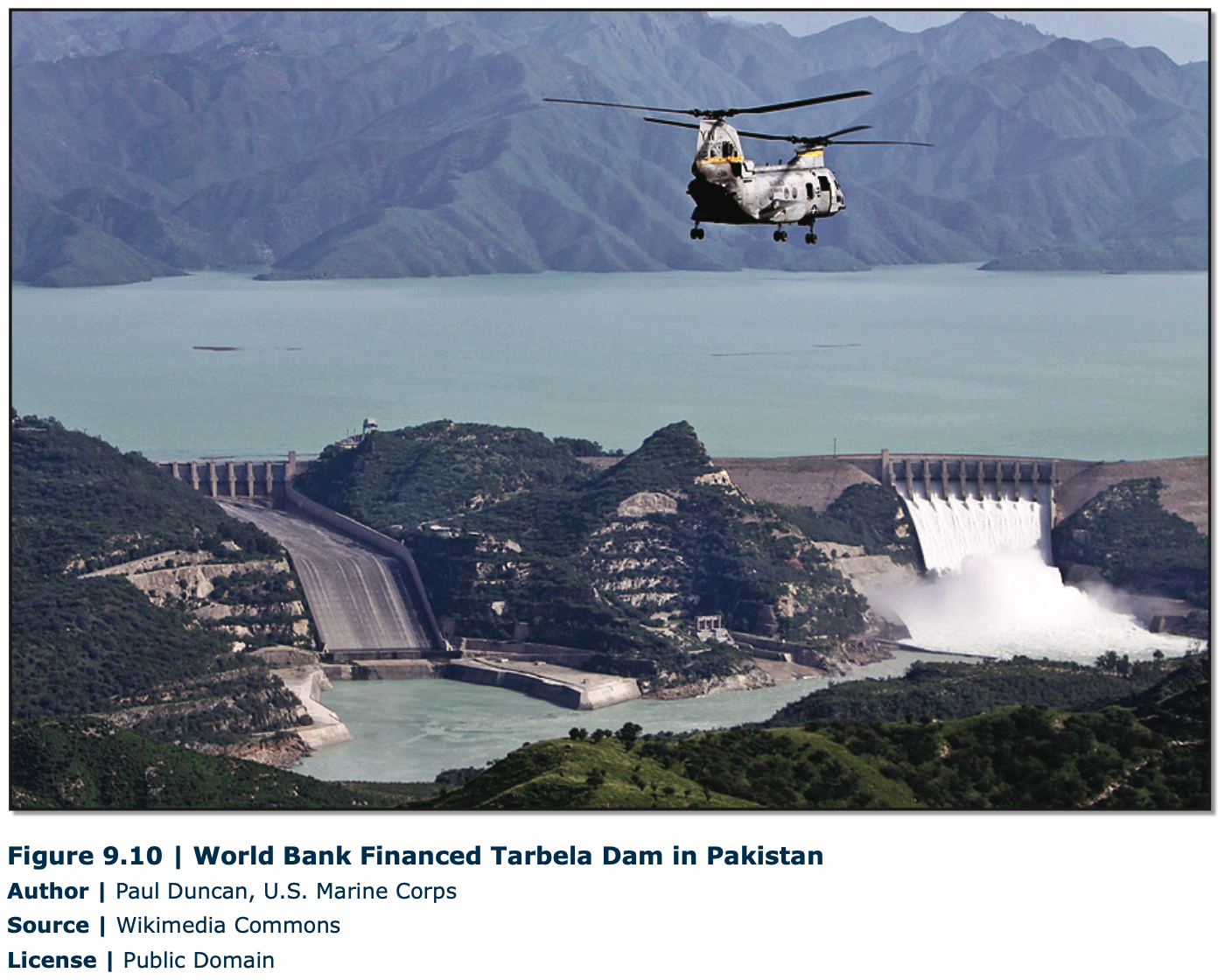 Another source of funding to governments comes in the form of emergency loans, usually from the International Monetary Fund (IMF). The IMF is funded primarily from wealthy private sector banks and offers loans during times of financial crisis. The loans are smaller than those from the World Bank and are not designated for national infrastructure projects, rather they are intended to maintain stability when a country may otherwise be vulnerable to political revolution, dictatorship, or collapse. Such loans, however, come with strings attached. The borrowing country must agree to a series of structural adjustment programs. Namely, countries must:

The end result of accepting an IMF loan, then, nudges that country away from the protectionist model of development and towards one that focuses on international trade. Most often, a country following the adjustments will experience a devaluation of their own currency, making imports more expensive, but exports more viable, which can be very beneficial to manufacturers searching for new, lower-cost manufacturing locations around the world. As with any major change to an economic system, there will always be big winners and big losers. The same can be said for structural adjustment programs and the IMF.