The contemporary North American scene dramatically displays how its population has refashioned the settlement landscape to meet the needs of a modern postindustrial society. In North American cities, a city’s center, commonly called downtown, has historically been the nucleus of commercial and services land use. It is also known as the central business district (CBD), usually being one of the oldest districts in a city and the nodal point of transportation routes. The CBD gives visual expression to the growth and dynamic of the industrial city, becoming a symbol of progress, modernity, and affluence. It contains the densest and tallest nonresidential buildings and its accessibility attracts a diversity of services.

Urban decentralization also reconfigured land-use patterns in the city, producing today’s metropolitan areas. If during the first half of the 20th century the concentric zone model was idealized, in which urban land is organized in rings around the CBD, today’s urban model highlights new suburban growth characterized by a mix of peripheral retailing, industrial areas, office complexes, and entertainment facilities called “edge cities.” In addition, the sector and multiple nuclei (multiple growth points) models of urban structure were developed to help explain where different socio-economic classes tend to live in an urban area (Figures 12.19, 12.20, and 12.21). All models show new residential districts added beyond the CBD as the city expanded, with higher-income groups seeking more desirable, peripheral locations. Like many other cities in the core regions, North American cities are also recognized for their prosperity. Yet, some problems still exist such as fiscal squeeze (less money from taxes), poverty, homelessness, neighborhood decay, and infrastructure needs. By contrast, some inner cities experience the process of gentrification, invaded by higher-income people who work downtown and who are seeking the convenience of less expensive and centrally located houses, larger and with attractive architectural details.

One characteristic of Europe is its high level of urbanization. Even in sparsely settled Northern Europe, over 80 percent of the people live in urban area (Iceland 94 percent)6. Southern and Eastern Europe are the least urbanized, with an average of 69-70 percent. While widespread urbanization is relatively recent in Europe, dating back only a century or two, the spread of cities into Europe can be associated with the classical Greek and Roman Empires, making many cities in Europe more than 2,000 years old. Among the largest metropolitan areas are Paris (10.9 mill.), London (10.4 mill.), and Madrid (6.1 mill.)7. European cities, like North American cities, reflect the operation of competitive land markets and they also suffer from similar problems of urban management, infrastructure maintenance, and poverty. Yet, what makes most European cities distinctive in comparison with North American cities is their long history, being the product of several major epochs of urban development.

The three zone models (concentric, sector, and multiple nuclei) characterizing North American urban areas are also valid in Europe, but there are significant differences regarding the spatial distribution of social groups, who may not have the same reasons for selecting particular neighborhoods within their cities. The European Central Business Districts (CBDs), for example, are inhabited by more residents than CBDs of the United States, most of them being higher-income people attracted by the opportunities to have access to commercial and cultural facilities, as well as to occupy beautiful old buildings located in some elegant residential districts. As a result, European CBDs are less dominated by business services than American CBDs. CBDs are, in general, very expensive urban areas. Consequently, poor people are more likely to live in outer rings in European cities.

Because many of today’s most important European cities were founded in the Roman and medieval periods, there are strict rules for preservation of their historicCBDs, such as banning motor vehicles, maintaining low-rise structures, plazas, squares, and narrow streets, and preserving the original architecture, including the former cities’ walls. Impressive palaces, cathedrals, churches, monasteries, accompanied by a rich variety of symbolism—memorials and statues—also constitute the legacy of a long and varied history (Figure 12.24).

The diversity of Europe’s geography means that are important variations not only from the Germanic cities to the cities of Mediterranean Europe but also from these areas to the eastern European cities, which experienced over 40 years of communism. State control of land and housing determined the development of a specific pattern of land use, expressed by huge public housing estates and industrial zones. In some cases, the structure of the old cities has been altered, and the new urban development has extended over rural areas (Figure 12.25). 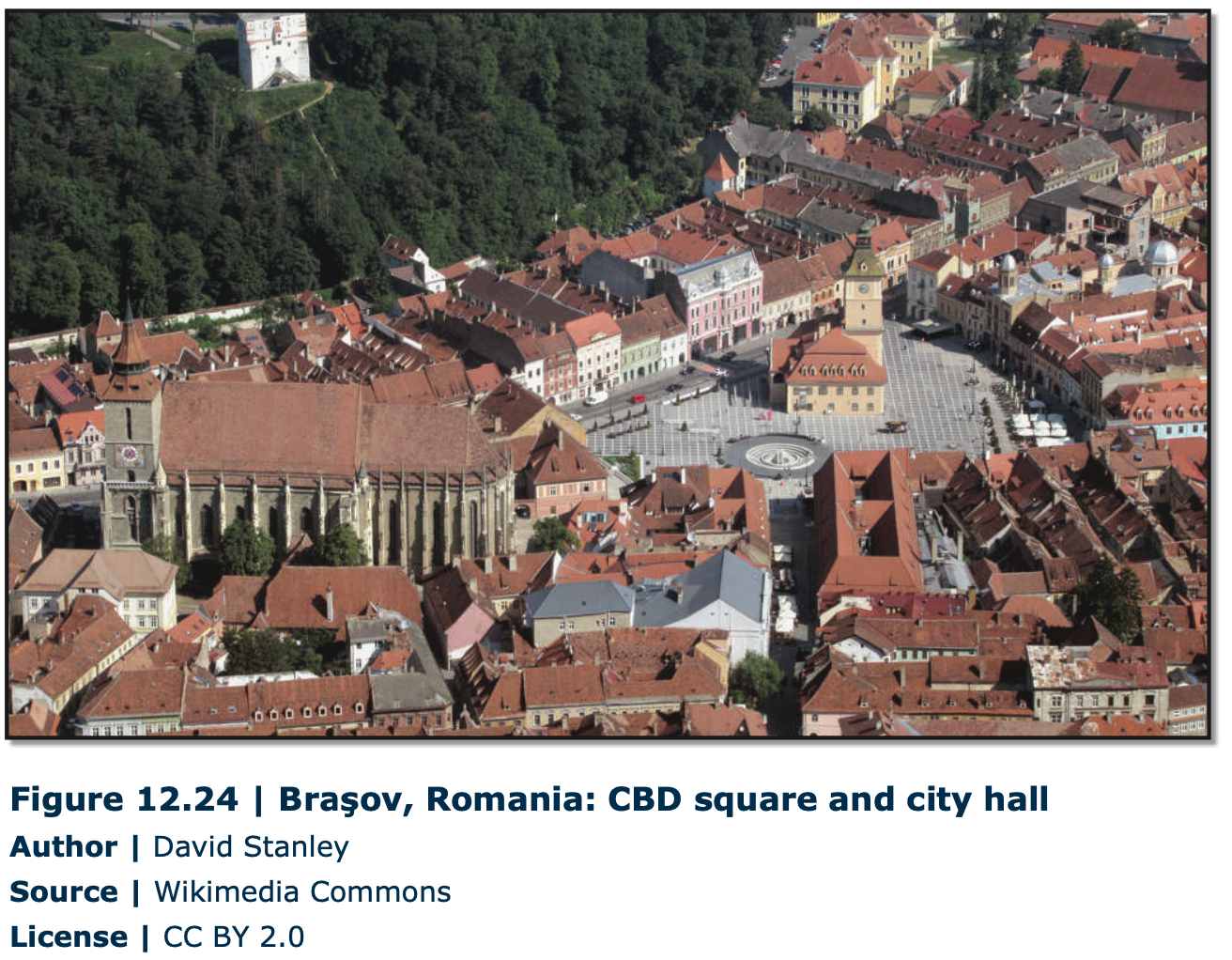 Europe has overlapping metropolitan areas, the most extensive megalopolis, Blue Banana, also known as the Manchester-Milan Axis, being a discontinuous urban corridor in Western Europe, with a population of around 111 million inhabitants. It stretches approximately from Northwest England across Greater London to the Benelux states and along the German Rhineland, Southern Germany, Alsace in France in the west, and Switzerland to Northern Italy in the south (Figure 12.26). New regions that have been compared to the Blue Banana can be found on the Mediterranean coast between Valencia and Genoa, as part of the Golden Banana or European Sunbelt, and in the north of Germany, where another conurbation lies on the North Sea coast, stretching into Denmark, and from there into southern Scandinavia. The growth in automobile ownership in the U.S., the new infrastructure systems, and the long-term home financing, as well as the tremendous amount of annexations of territory from surrounding counties, resulted in a dramatic spurt in suburban growth (Figure 12.27). Thus, sprawl is endemic to North American urbanization. Low density and single-family suburban development is a positive aspect of suburbanization. Today, about 50 percent of Americans live in suburbs. Sprawl is less common outside European cities. Yet, the personal and environmental costs of this development are also significant. Noteworthy among these are automobile dependence, increased commute time and cost of gasoline, as well as air pollution and health problems. Even worse, more and more agricultural land is lost in favor of residential developments. Equally important, local governments must spend more money than is collected through taxes to provide services to the suburban areas. 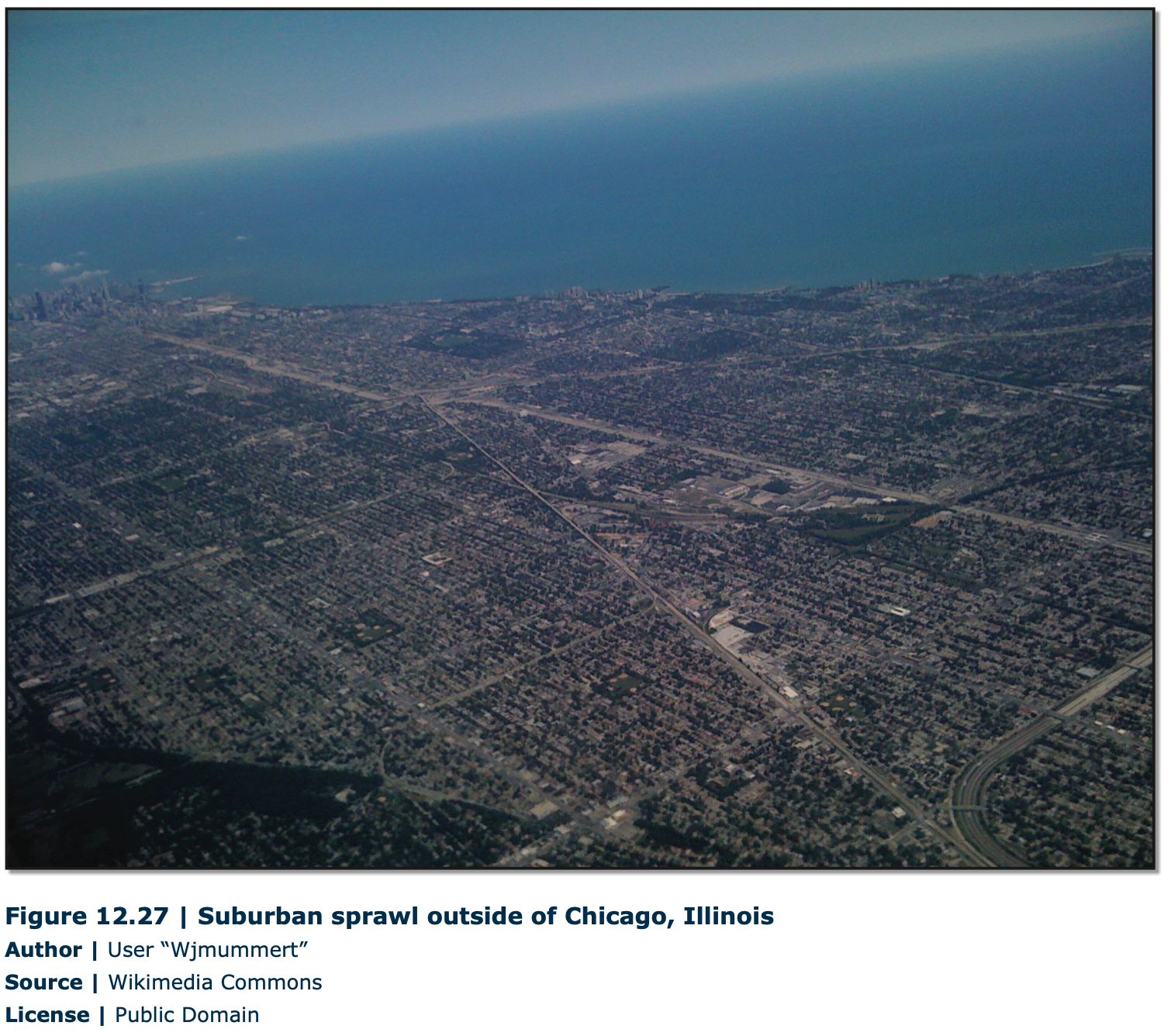 The compromise solution is ‘smart growth,’ known as ‘compact city’ in Europe, particularly in the United Kingdom. Smart growth is urban planning that concentrates growth in compact areas, strategically designed with adequate infrastructure and walkable, transit-oriented, bicycle-friendly urban centers. Characteristics of smart development include higher density living spaces, preserving open space, farmland, and natural and cultural resources, providing a variety of transportation choices, making development decisions predictable, fair, and cost-effective, equitably distributing the costs and benefits of development, and encouraging community collaboration in developing decisions. Smart growth and related concepts are not necessarily new, but are a response to car culture and sprawl. Smart growth values long-range, regional considerations of sustainability over a short-term focus. Yet, in practice, the process experiences challenges even from citizens, in some cases expressing their opposition to the local smart growth projects.