While the technology exists to burn fossil fuels so that the emissions are not particularly significant in terms of air pollution, air quality reduction because of the combustion of fossil fuels is still considerable and is a cause for concern at the international level. Another pollutant that has received worldwide attention is chlorofluorocarbons (CFCs) and their impact on the ozone layer. Water pollution and the disposal problem of solid wastes are also important environmental concerns.

One of the major issues internationally is the suspected anthropogenic, or human-caused, warming of the Earth’s atmosphere because of carbon dioxide in fossil fuel emissions. The issue is complex because “climate change”, as global warming has been dubbed, is affected by both natural and anthropogenic processes. A number of scientists are concerned with warming temperatures in the lower atmosphere because this warming could contribute to rising sea levels, an increase in the frequency of storms and drought, a greater number of heat injuries, and the spread of tropical pests into higher latitudes. Many climatic factors operate to affect global temperatures, so carbon dioxide produced by the burning of coal, oil, and natural gas is not the only important element that dictates temperatures worldwide. Ocean currents, shifts in large warm and cold pools of the Oceans such as El Ǹino/La Ǹina, changes in sunspot activity, photosynthesis from global plant life, the extent of global sea ice, the type and extent of global cloud cover, the natural cycling of carbon, and volcanic activity are but a few of the climate controls of global temperatures.

International efforts to curb emissions of anthropogenic carbon began in earnest with the Kyoto Protocol in 1997. This agreement, signed and ratified by many countries around the world, sought to establish goals whereby countries would reduce their greenhouse gas emissions. The U.S. never ratified the treaty, particularly because India and China, two of the world’s biggest producers of carbon dioxide, were not required to reduce their emissions. However, the U.S. and other countries have continued their dialogue about lowering emissions, and the recent Paris Climate Summit is 2016, signed by 194 countries (5), is the newest plan for global cooperation in carbon dioxide reductions and with a goal to keep global average temperatures at less than 2o C above preindustrial levels. 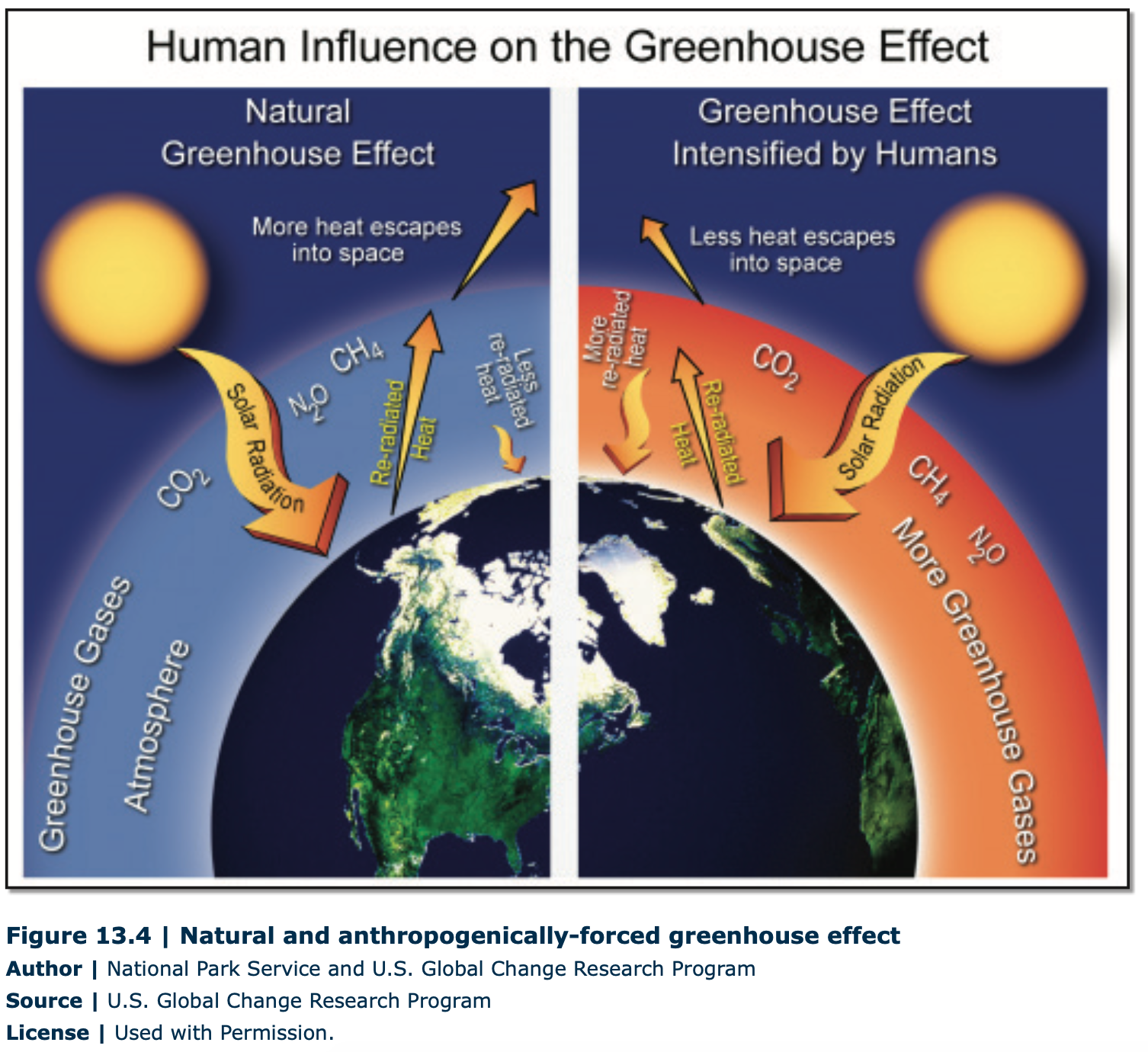 Another example of international cooperation to decrease atmospheric pollutants involves the ozone layer. The ozone layer is in the stratosphere or upper atmosphere from 10–50 kilometers above the Earth’s surface. This important layer of ozone gas protects the Earth from harmful ultraviolet radiation that can be harmful to skin by causing sunburn and skin cancer. Scientists believe that chlorofluorocarbons (CFCs), used in refrigeration equipment and aerosols, have damaged the ozone layer and caused it to become dangerously thin over some parts of the globe. This thinning of the ozone layer has been named an “ozone hole”, and is most pronounced around the South Pole during the Antarctic spring (Figure 13.5).

In response to these scientific findings, in 1987, 105 countries signed an international agreement known as the Montreal Protocol. The participating countries agreed to reduce the consumption and production of CFCs and to cease producing CFCs by the year 2000. The Montreal Protocol process continues as countries work to find ever-better substitutes for CFCs. Although CFCs will linger in the upper atmosphere for many years, scientists have already seen some evidence of recovery in the ozone layer. While air pollution of the atmospheric global “commons” is an international issue, pollution of water and land areas is likewise problematic. The supply of clean, fresh water for drinking and other uses such as irrigation is under stress as population pressure continues to increase demand. Many regions with water deficits experience periodic droughts that strain available supplies. Unfortunately, both ground and surface waters are being polluted both in the United Statesand abroad. Pollutants such as industrial chemicals, runoff from roadways, and untreated sewage place a heavy toll on water supplies.

Not only is unclean water unsafe to drink and in some cases unfit for irrigation purposes, but pollution can also have a deleterious effect on aquatic life. Large industrial spills, discharge from paper mills, and other types of pollutants can render a lake or stream devoid of life for considerably long periods. Another type of pollutant that is of considerable concern in the United States and abroad is commercial fertilizers used in large-scale agriculture. Although it would seem that fertilizers would encourage plant growth and help aquatic ecosystems thrive, the opposite is, in fact, true in many cases. Rainfall washes commercial fertilizers into surface lakes and streams, and these fertilizers increase the growth of algae. Through a process called eutrophication, the abundant algal blooms die, and in the process of decomposition of the dead plant material, large amounts of oxygen are consumed. The lack of oxygen can result in extensive fish kills. One stark example of the harmful effects of eutrophication can be seen in the Gulf of Mexico. The Mississippi River carries a significant load of commercial fertilizers, and where the river discharges into the Gulf, “dead zones” form at certain times of the year. The bottom and near-bottom portions of the Gulf can become almost devoid of marine life over several thousand square miles. As a result, the Gulf of Mexico has the second largest “dead zone” of depleted oxygen area in the entire world, with the largest being in the Baltic Sea. (Figure 13.7). As countries struggle to maintain clean water sources, a related problem with pollution occurs with solid waste and its disposal. Solid waste that is buried beneath the ground can, overtime, begin to pollute the groundwater below it. Water percolating downward through the rubbish can pick up harmful pollutants and deposit them in subsurface water sources. These groundwater reservoirs feed surface streams and are also tapped for well water. In the state of Florida, for example, the pollution of groundwater reservoirs, known as aquifers, is a significant issue because the state relies heavily on groundwater for its water supply.

Three primary solutions to the problem of solid wastes is disposal in landfills, incineration of the trash, or recycling. In the United States, solid waste collectors pick up trash in cities and neighborhoods and transports the waste to landfills where it is buried daily to decrease the pervasive odor and protect it from marauding pests. This is the most common method of dealing with solid waste in the United States, but unfortunately, as urban sprawl expands towards areas where landfills were on the periphery of populated areas, the matter of residents having to live close to landfills is problematic. Moreover, landfills require extensive areas of land, and in some states with heavy population concentrations such as New York City, government officials have resorted to shipping their refuse into adjacent states such as Pennsylvania where space for landfills is more available.

Another less common alternative to landfills is incineration, a process made famous in Disney’s Toy Story 2 (Figure 13.7). At incineration facilities, trash is dumped into an enormous pile, and a claw-like machine picks up the trash and continually feeds the fire of the incinerator. The advantage of incineration is the vast reduction in the amount of trash that must be disposed of in landfills, and these facilities also generate electricity from the combustion of the burning trash. Fortunately, because of advanced technology in the smokestack systems, the emissions from modern incinerators are not particularly harmful in the atmosphere. Because of its enormous output of daily solid waste, New York City takes advantage of incineration through a facility on the Hudson River just north of the city. The last method to deal with solid waste, recycling, is the most sustainable. Recycling involves the conversion of waste or other unwanted material into something that is reusable. Common wastes that are recycled include paper products, metals, plastics, and glass. In the United States, efforts to improve the percent of waste material that is recycled instead of disposed of in trash disposal units are many. For example, Recyclemania, started in 2001, is a nation-wide competition amongst colleges and universities to promote student knowledge and participation in recycling. Georgia Gwinnett College in Lawrenceville, GA, is one of the many competitors in Recyclemania every spring. Despite efforts such as these, the United States only recycles about 30 percent of solid waste, even though approximately 75 percent of the waste is recyclable. In contrast, Germany recycles about 65 percent of its municipal waste and leads the world, followed closely by South Korea at 59 percent. Germany’s recycling emphasis reflects the generally strong emphasis on recycling in most European countries, thanks to rather strict recycling laws.