Writing, or the representation of meaning through symbols and images, is an artifact of great historical and cultural importance. The Middle East is the birthplace for many forms of written language, including several phonetic alphabets which provided the breakthrough of representing sound through visual media. Artifacts (see below) of various scripts show the diversity of the cultural influences and how they have evolved over time. In addition to writing systems now strongly associated with the Middle East, such as Arabic and Hebrew, scripts developed by Assyrians, Egyptians, Babylonians, Sumerians, and Ancient Greek systems, such as linear B, are included. These samples demonstrate the widespread geographic influence these civilizations have had, from North Africa, to West Asia, and to the Indian subcontinent. Figure \(\PageIndex{1}\): The Rosetta Stone, with inscriptions in Hieroglyphics, Egyptian Demotic and Greek. The inscriptions were of the same message, but in different languages and writing systems. It was the most critical artifact in the scholarship which finally would decipher Ancient Egyptian Hieroglyphics. Discovered by Napoleon’s team of scholars in Rosetta, Egypt, in 1799, this artifact now symbolizes the act of decoding and uncovering lost knowledge. “Rosetta Stone” by Hans Hillewaert, from Wikimedia Commons, licensed under CC BY-SA 4.0

The samples below serve as introductions to linguistic history of the Middle East. These examples continue to have relevance today, whether continued as a form of spoken language, a liturgical language used in worship, or as a medium for conveying important cultural ideas. Arabic, Hebrew, and Greek have survived as living languages, still spoken by significant numbers of people. There are still people in Syria who speak Aramaic, also known as Syriac, as their native tongue. Ancient Egyptian continues through to the present day as the liturgical language used in the Coptic church. Arabic and Hebrew outlived the others, however, as the most actively used writing systems.

The primary living languages of the Middle East today are Arabic, Hebrew, Kurdish, Persian and Turkish. Pashto is another language spoken by a significant number in Afghanistan, while other Turkic languages closely related to Turkish, such as Turkmen, Uzbek, and others are important. Tajik and Dari are forms of Persian spoken in Afghanistan and Tajikistan. Arabic has a unique place amongst the writing systems due to its place in Islam, and Islam’s impact on the region. Many of these languages use, or have used Arabic script in the past, as their writing system. We therefore cover Arabic and its influence in sections, “Arabic’s Influence in the Region”, and “Islamic Expansion”.

Early Forms of Writing Developed in the Region Figure \(\PageIndex{2}\): Cuneiform tablet. Cuneiform was the writing system for Akkadian, used by Sumerians, Babylonians and further developed by the Assyrians in the neo-Assyrian Empire. By BabelStone (Own work), from Wikimedia Commons, licensed under CC BY-SA 3.0 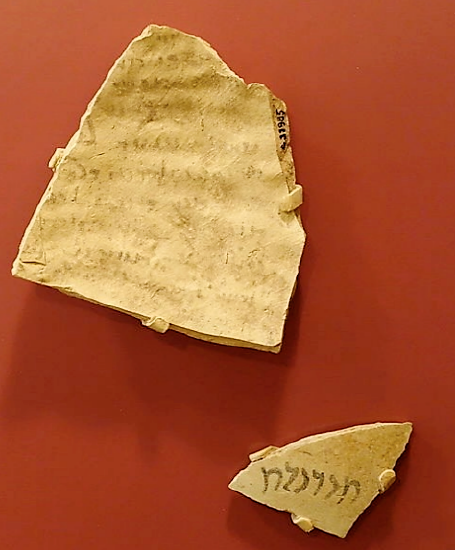 Figure \(\PageIndex{4}\): Aramaic writing on a pot fragment. This was the language of the neo-Assyrian Empire (founders of Nineva). By Daderot (Own work), via Wikimedia Commons. C.C.0 Figure \(\PageIndex{11}\): Example of Demotic, a form of Ancient Egyptian writing, sort of a shorthand for heiroglyphics. This is the text of a contract, written on papyrus during the Ptolemaic era. This file is licensed under the Creative Commons Attribution-Share Alike 2.0 France license.via Wikimedia Commons. http://commons.wikimedia.org/wiki/ File:Contract-IMG_6282.JPG Figure \(\PageIndex{12}\): This is on a church in Cairo: Coptic inscription of the Biblical verse on the top, Arabic on the bottom. Coptic & Arabic inscriptions Old Cairo, Egypt, photo taken April 2005. The verses are John 4:13 and 14. By Disdero, C.C.0, via Wikimedia Commons