“Toward the end of an age, more and more people lose faith in their institutions and finally they abandon their belief that these institutions might still be reformed from within.”

The legislative process is much more detailed than described in the previous chapter. The process is susceptible to several pathologies, meaning that it can be manipulated in ways that grossly distort the textbook version of how a bill becomes a law.

Nineteenth century German Chancellor Otto von Bismarck once remarked that laws had something in common with sausages: “It’s better for your stomach not to watch either one of them being made.” The legislative process, unfortunately, more resembles interested minorities clashing, than rationally deliberating the public good. One legislative practice that Bismarck may have had in mind is logrolling, or trading votes for something desired: A congressman votes on something he doesn’t really care about, in exchange for something in return. For example, although a congressman would never admit it, she might vote for a bill to build a defense project in another state, knowing it’s a waste federal money. In exchange, the congressman who wanted the defense project votes to support a road project in another district. 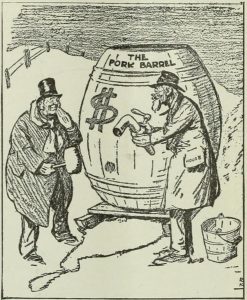 Those same congressmen will pat themselves on the back for “bringing home the bacon” on the road project, while decrying wasteful government spending. That phrase, “bringing home the bacon,” is related to pork barrel spending. There are multiple stories about the phrase’s origin. One has it that the name comes from the pre-Civil War practice of distributing salt pork to slaves from large barrels. Another story says that pork barrels were a common staple in nineteenth century rural kitchens. The barrel’s pork level was a sign of the family’s prosperity. In any case, the practice of congressmen dipping into the national treasury to fund local projects came to be known as them dipping into the pork barrel—and the name and the practice have continued ever since.

According to the watchdog group Citizens Against Government Waste (CAGW), in 2019 Congress spent $15.3 billion on what it defines as pork barrel projects. The organization’s Pork Hall of Shame documents the worst abuses, including funding for local museums and recreation facilities, upgrades to military equipment that the Pentagon didn’t request, and targeted research funds that go to particular universities. (2) Critics say that these projects do not serve the national interest and therefore should not be funded by national taxpayer dollars.

Pork barrel spending is largely accomplished through inserting earmarks into congressional bills. An earmark is typically a small paragraph of very specific language inserted into a budget appropriation bill directing an agency to fund a project. CAGW typically identifies hundreds of earmarks every year. These earmarks are often the result of congressmen bowing to lobbying pressures and organized interests’ campaign contributions. Not all earmarks are pork, but if an earmark meets one of the following criteria, CAGW defines it as pork: Only one congressional chamber requested it; not specifically authorized; not competitively awarded; not requested by the president; greatly exceeds the president’s budget; not the subject of congressional hearings; serves only a local or special interest. Many projects meet more than one of those criteria.

The legislative process is also occasionally subject to outright corruption and illegal behavior. This sometimes takes the form of bribery, in which special interests provide tangible benefits for congressmen in exchange for congressmen providing favors. Other forms of corruption are more mundane. In 1994, Representative Dan Rostenkowski (D-IL) lost his seat and later served fifteen months in federal prison for misusing payroll and office expense money. In 2002, Representative James Traficant (D-OH) was convicted of racketeering, tax evasion, and bribery. He was one of the House’s few members to be formally expelled by his colleagues. In 2005, Representative Randall “Duke” Cunningham (R-CA) pled guilty to a variety of offenses including bribery and mail fraud involving his relationship with defense contractors Mitchell Wade and Brent Wilkes and co-conspirators. In exchange for earmarks, government contracts, and other favors, the contractors provided Cunningham with a yacht on which to live and bought a California house from him for $700,000 above market value, among other favors. In 2009, Representative William Jefferson (D-LA) was convicted of bribery and money laundering. The FBI raided Jefferson’s home and discovered $90,000 in cash stashed in the freezer. The money was part of a bribe Jefferson received in exchange for help with a Nigerian business deal. A number of congressmen—Representative Tom DeLay (R-TX), Senator Conrad Burns (R-MT), Representative Roy Blunt (R-MO), Representative Bob Ney (R-OH), and others—were implicated in the corrupt web surrounding the disgraced and convicted lobbyist Jack Abramoff. Representative Ney pled guilty to taking money and gifts in exchange for doing work on behalf of Abramoff, and then Ney resigned from Congress in October 2006. The scandal resulted in two Bush administration White House officials and congressional staff members going to jail.

Another form of corruption that sometimes ensnares congressional members is insider trading. It is against federal law to use information not available to the public when executing securities trades. This used to be more common among congressional members before the STOCK Act passed in 2012, which explicitly said that representatives, senators, and their staff, “are not exempt from the insider trading prohibitions arising under the securities laws.” But cases still do arise. In 2019, Representative Chris Collins (R-NY), one of Congress’ wealthiest members at the time, pled guilty to insider trading and conspiracy—part of which involved a phone call to his son Cameron Collins made from the White House lawn to give him inside information on a biotech company’s failed drug trial. (3) In 2020, several members of Congress were accused of dumping stocks after they found out via classified briefings that the coronavirus pandemic was going to be severe. (4)

Perhaps the legislative processes’ biggest pathology—gridlock—is the ability to stop something that the American people desire. There are a thousand and one ways for this to happen in Congress. Most bills get bottled up in committee and never come to a floor vote. This happens frequently when the bill is attempting something that organized interests’ lobbyists don’t want to see happen. Some bills get poison pill amendments attached to them to render the bill useless or to damage its chances of passing. The Senate filibuster kills some bills. When one chamber is controlled by one party and the other chamber is controlled by the other, frequently bills will pass one of the chambers only to be defeated—or not even considered—in the other. This is a function of the bicameral legislature plus the chamber’s divided political control.