As you probably remember from your course in introductory psychology, there are a number of different types and stages of memory, involving different brain areas and processes. In this section, we briefly outline the different types of memory and some of what is known about the localization of different types of memory in the brain. We discuss the intriguing case of H.M. whose profound loss of ability to form new long-term memory of facts and events led to much of what we know about declarative memory and the involvement of the medial temporal lobes in memory formation. Formation of memories about how to do things, procedural or motor memory involves different brain areas, in particular, the cerebellum.

Memory and the Brain

As discussed earlier in this chapter, learning can be defined as the acquisition of information during the lifetime of the individual organism. This information is stored in memory systems of the brain of the animal. By contrast, genetic information, which is acquired over the evolutionary history of the species, is stored in DNA. Remember that behavioral adaptations can be organized by information from both sources. The relative contribution of each source of information to the organization of any particular behavior varies with the type of behavior and the species. Typically, learning is more important to organization of behavior in the more complex animal species with larger, more complex brains, yet evidence of memory, as discussed earlier in this chapter, is even found in honey bees and other invertebrates.

Memory refers to the processes of storage and retrieval of learned information.

One major distinction is between verbal memory, memory for words and ideas stated in words (dependent on language areas in frontal and temporal cortex) and memories in the form of visual images (dependent upon occipital, temporal, and parietal lobe cortex; see Figure 10.3.1). For example, when I remember a hotel that I stayed at in Hong Kong many years ago, I get a visual image of the hotel and the streets of Hong Kong nearby. Memories can be in the form of other sensory modalities as well. When I remember talking to a friend on the phone, I can almost "hear" my friend's voice in my mind (memory in the form of an auditory "image"). Verbal memories themselves can often involve auditory "images" in your mind, the sounds of the words you are thinking about. Think about what a lemon tastes like and you will almost "taste" it in your mind (memory in the form of a taste "image").

Another important distinction between different forms of memory is memory for facts and events. This is explicit or declarative memory, which is of two types, episodic (memory of episodes in your life) and semantic memory (memory for facts and knowledge). A second type, implicit memory, is also of two types, procedural memory (memory for how to do things, such as skills like riding a bike, sometimes called motor memory), and memory for classically conditioned responses and priming effects.

Types of Memory and the Brain

Different areas of the brain are involved in these different types of memory. The cerebellum, located in the hindbrain, is involved in formation and storage of motor programs for learned skilled movements (procedural or motor memory) and is also the source of learning and memory of simple conditioned reflexes such classical conditioning of the eye blink reflex (Kim & Thompson, 1997; Christian & Thompson, 2003). By contrast, the hippocampus has been implicated in the "consolidation" or fixing of new long term episodic or declarative memories into permanent storage (see Bird & Burgess, 2008), as well as the encoding of the temporal sequencing of events (Ranganath & Hsieh, 2016), spatial memory (Bird & Burgess, 2008; Voss, et al., 2017), and retrieval of memories by reactivating cortical representations of the retrieved memories (Tanaka, et al., 2014).

The Three Stage Model of Memory and the Brain

Sensory memory is very short duration but very high capacity memory. To illustrate, just close your eyes at this moment and you will "see" a mental image of what it was you were just looking at. That is visual sensory memory and likely involves the visual cortex in occipital lobe. Notice it is nearly a replica of what you were just looking at; the mental image is a very detailed image, an information dense, high information capacity form of storage. But the image quickly fades--that is, this stage of memory is of very brief duration, not more than a few seconds.

Short-term memory is a bit longer in duration, up to a few minutes. But the capacity of STM is not nearly as large as sensory memory. It is usually said that STM has the capacity to store 7 plus or minus 2 separate items of information at a time (Miller, 1956). This is a limited storage capacity compared to the other stages of memory. Short term memory is also called working memory. This is because when you use information from your memory to do some task you are using it while it is in this stage of memory, the short term memory store, thus the term working memory is often used to refer to this stage.

According to the three-stage model, information then moves from STM (working memory) into the third stage of memory, Long term memory (memories here may last a lifetime; this memory stage has very large capacity and very long duration). This movement of information from STM to LTM and its "consolidation" into a long term trace appears to critically involve the limbic system, more specifically, the hippocampus (Squire, et al., 2015), located in the medial temporal lobes (see Figure 10.3.1). When you are studying for an exam, you are trying to get information encoded into long-term memory. Consolidation of the new semantic memory by your hippocampus, and the surrounding medial temporal lobe, is essential to this process.

Research has led to a consensus that the medial temporal lobes have an essential function in declarative memory. As Squire et al. (2004, p. 279) summarize: "The medial temporal lobe includes a system of anatomically related structures that are essential for declarative memory (conscious memory for facts and events). The system consists of the hippocampal region (CA fields, dentate gyrus, and subicular complex) and the adjacent perirhinal, entorhinal, and parahippocampal cortices." 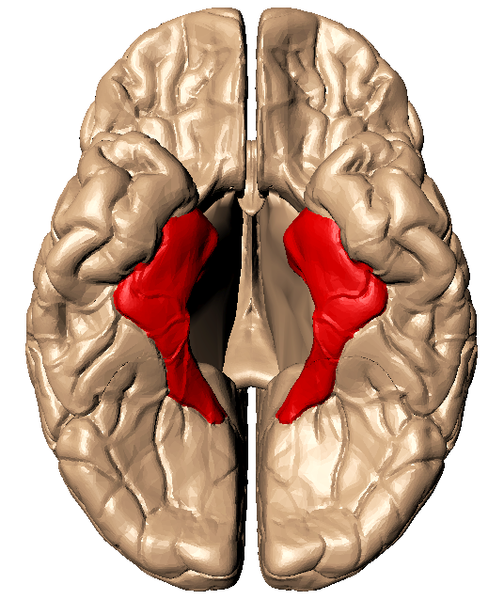 A fascinating research enterprise contributing greatly to our understanding of memory is the case of H.M.  H.M. had bilateral removal of much of his medial temporal lobes including both of his hippocampi (remember that the hippocampus is located deep beneath the temporal lobe cortex), surgery performed in order to control his epileptic seizures (which were originating from the temporal lobe). Up until his death in December of 2008 of natural causes at age 82, H.M. still believed that Eisenhower was President of the United States. He knew almost nothing about anything that had happened after his brain surgery. According to a researcher working with H.M. with whom I spoke, before H.M. died whenever he was asked to describe his physical appearance, even years after his surgery, H.M. continued to describe himself as a young man with a thick head of wavy black hair, even though, at his age, he had almost no hair at all. After the surgical removal of much of his medial temporal lobes, H.M. could remember most things that happened before his surgery, but he could not remember any new facts or events for more than a few minutes. His old long-term episodic and semantic memory was fine. His short-term memory was also normal. What he could not do was to consolidate or fix any new information about facts or events into his long-term memory. Yet, his implicit memory and his ability to consolidate new procedural memories into permanent storage was normal. He learned to play computer games with great skill, but never was able to remember having learned them, and he was often puzzled about why he was so good when he couldn’t even remember having seen computers or computer games before.

I sometimes speculate about what it must have been like for H.M. when he got up in the morning and looked in the mirror, expecting to see himself as a young man and finding an old man instead. Or I wonder when awoke in the morning and looked over at his wife lying next to him. He can only remember her as she looked as a much younger woman. What must he have experienced when he saw the older woman asleep next to him? Did he know who she was? He must have been puzzled about what could have happened to her overnight (younger and prettier, and now much older and perhaps not so pretty). Soon, however, he would forget what he had just seen minutes before. The life of H.M. must have been truly extraordinary. Studies of H.M. for many decades before his death in 2008 revealed much that we know about memory and the brain today, in particular the role of the medial temporal lobe structures in declarative (conscious) memory formation. Many years earlier, Karl Lashley, a physiological psychologist, now well known in the history of psychology, investigated the physical basis of memory in the brain by teaching rats a maze and then destroying various parts and amounts of their brain tissue to see which areas were critical to memory. He was searching for the physical representation of memory in the brain. He referred to the physical changes in the brain, which occur when we learn and remember something, the "engram," or "memory trace."

His results were inconclusive, but he did find that the more cortex he destroyed the greater the disruption of memory. He called this the "principle of mass action." Today memory research continues and new insights have been discovered about the nature of the "engram," which appears to involve the modification of synapses (Howland & Wang, 2008), the growth of new synapses, and even the growth of new neurons (Deng et al., 2010; Ranganath & Hsieh, 2016). We discuss more about the physical changes in the brain that appear to be involved in learning and memory in later sections of this chapter.

Different types of memory have been designated by researchers as explicit and implicit, declarative, semantic and episodic, procedural or motor memory, and some forms of memory involve three stages, sensory, short-term, and long-term. Different types of memory and different stages involve different brain areas and processes. The case of H.M. led researchers to recognize the essential role of the hippocampus and other regions of the medial temporal lobes in the formation of long-term declarative memories, while the cerebellum stores motor programs of learned skilled movements and memory of at least some reflexes such as the eye-blink reflex. Mechanisms that seem to be the basis for learning and memory at the more microscopic level appear to depend on synaptic changes.

Baddeley, A. D. (1982). Implications of neuropsychological evidence for theories of normal memory. Philosophical Transactions of the Royal Society of London. B, Biological Sciences, 298 (1089), 59-72.

1. Section 10.3, "Introduction to Memory and the Brain," is original material written by Kenneth A. Koenigshofer, Ph.D., and is licensed under CC BY 4.0