The Classical Wernicke-Lichtheim-Geschwind model of the neurobiology of language

The brain areas included in the best known model of how language is processed by the brain are Broca's area in the frontal lobe, Wernicke's area in the temporal lobe, and the arcuate fasciculus which connects the two. In this model, Broca's area is associated with language expression and Wernicke's area with language comprehension. Damage to any of these produces various forms of aphasia (language disorder) with different symptoms. Damage to Broca's area produces Broca's aphasia characterized by difficulties with language expression. Wernicke's aphasia involves difficulty with speech and language comprehension. Damage to the arcuate fasciculus produces conduction aphasia characterized by impaired ability to repeat simple phrases while expression and comprehension remain otherwise unimpaired.

Table 10.14.1: Features of two forms of aphasia (based on National Aphasia Association; https://www.aphasia.org/aphasia-reso...QaAhX6EALw_wcB). Broca’s area is generally defined as comprising Brodmann areas 44 and 45, which lie anterior to the premotor cortex in the inferior posterior portion of the frontal lobe. Though both area 44 and area 45 contribute to verbal fluency, each seems to have a separate function, so that Broca’s area can be divided into two functional units. Figure \(\PageIndex{3}\): The classical Wernicke-Lichtheim-Geschwind model of the neurobiology of language. In this model Broca's area is crucial for language production, Wernicke's area subserves language comprehension, and the necessary information exchange between these areas (such as in reading aloud) is done via the arcuate fasciculus, a major fiber bundle connecting the language areas in temporal cortex (Wernicke's area) and frontal cortex (Broca's area). The language areas are bordering one of the major fissures in the brain, the so-called Sylvian fissure. Collectively, this part of the brain is often referred to as perisylvian cortex. (Image and caption from Wikimedia Commons; retrieved 10/18/21).

Area 44 (the posterior part of the inferior frontal gyrus) seems to be involved in phonological processing and in language production as such; this role would be facilitated by its position close to the motor centres for the mouth and the tongue. Area 45 (the anterior part of the inferior frontal gyrus) seems more involved in the semantic aspects of language. Though not directly involved in accessing meaning, Broca’s area therefore plays a role in verbal memory (selecting and manipulating semantic elements).

Wernicke’s area lies in the left temporal lobe and, like Broca’s area, is no longer regarded as a single, uniform anatomical/functional region of the brain. By analyzing data from numerous brain-imaging experiments, researchers have now distinguished three sub-areas within Wernicke’s area. The first responds to spoken words (including the individual’s own) and other sounds. The second responds only to words spoken by someone else but is also activated when the individual recalls a list of words. The third sub-area seems more closely associated with producing speech than with perceiving it. All of these findings are still compatible, however, with the general role of Wernicke’s area, which relates to the representation of phonetic sequences, regardless of whether the individual hears them, generates them himself or herself, or recalls them from memory.

This lobule is composed mainly of two distinct regions: caudally, the angular gyrus (area 39), which itself is bounded by the visual occipital areas (areas 17, 18, and 19), and dorsally, the supramarginal gyrus (area 40) which arches over the end of the lateral sulcus, adjacent to the inferior portion of the somatosensory cortex. 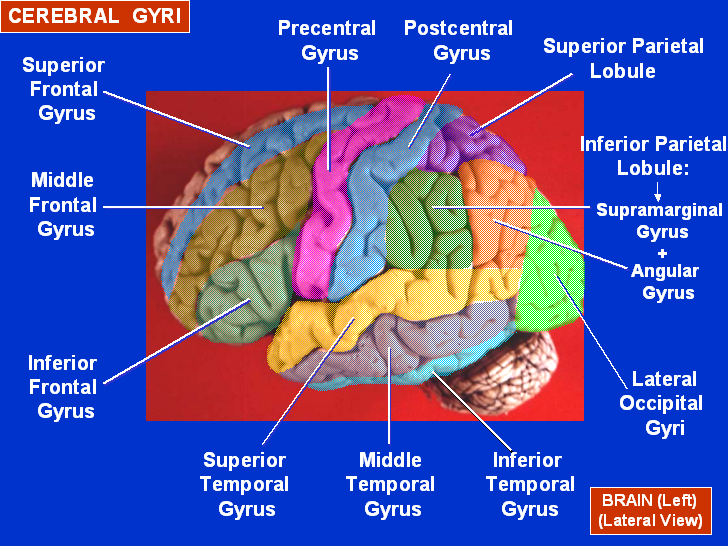 Together, the angular and supramarginal gyri constitute a multimodal associative area that receives auditory, visual, and somatosensory inputs. The neurons in this area are thus very well positioned to process the phonological and semantic aspect of language that enables us to identify and categorize objects.

The language areas of the brain are distinct from the circuits responsible for auditory perception of the words we hear or visual perception of the words we read. The auditory cortex lets us recognize sounds, an essential prerequisite for understanding language. The visual cortex, which lets us consciously see the outside world, is also crucial for language, because it enables us to read words and to recognize objects as the first step in identifying them by a name.

There are wide variations in the size and position of Broca’s area and Wernicke’s area as described by various authors.

Brain areas such as these, which perform high-level integration functions, are more heterogeneous than areas that perform primary functions. This greater heterogeneity might reflect greater sensitivity to environmental influences and greater plasticity (Links to an external site.) (ability to adapt to the environmental influences). The functional organization of language would even appear to vary within the same individual at various stages of his or her life!

Any attempt to define the precise boundaries of a particular area of the brain, such as Broca’s area or Wernicke’s area, will involve some serious problems. But we do know that the cytoarchitectonic areas described by Brodmann provide better anatomical correlates for brain functions than do the shape of the brain’s convolutions. That said, a cortical area such as Broca’s cannot be precisely described by reference to Brodmann areas alone. Though many authors regard Broca’s area as consisting of Brodmann areas 44 and 45, other authors say it consists only of area 44, still others only of area 45, and yet others of areas 44, 45, and 47.

Broca’s area may also include the most ventral portion of Brodmann area 6, as well as other parts of the cortex lying deep within the lateral sulcus (sulcus is a "valley" between gyri). It is even possible that only certain parts of these areas are actually dedicated to language.

Brain-imaging studies have shown to what a large extent cognitive tasks such as those involving language correspond to a complex pattern of activation of various areas distributed throughout the cortex. That a particular area of the brain becomes activated when the brain is performing certain tasks therefore does not imply that this area constitutes the only clearly defined location for a given function. In the more distributed model of cognitive functions that is now increasingly accepted by cognitive scientists, all it means is that the neurons in this particular area of the brain are more involved in this particular task than their neighbors. It in no way excludes the possibility that other neurons located elsewhere, and sometimes even quite far from this area, may be just as involved.

Thus, just because the content of a word is encoded in a particular neuronal assembly does not necessarily mean that all of the neurons in this assembly are located at the same place in the brain. On the contrary, understanding or producing a spoken or written word can require the simultaneous contribution of several modalities (auditory, visual, somatosensory, and motor). Hence the interconnected neurons in the assembly responsible for this task may be distributed across the various cortexes dedicated to these modalities.

In contrast, the neuronal assemblies involved in encoding grammatical functions appear to be less widely distributed.

Language acquisition in humans is based on our capacities for abstraction and for applying rules of syntax—capacities that other animals lack. For example, brain-imaging experiments have shown that Broca’s area becomes active when subjects are learning actual rules of grammar in another language, but not when they are exposed to fictitious rules that actually violate the grammar of that language.

These findings suggest that in Broca’s area, biological constraints interact with experience to make the acquisition of languages possible. Broca’s area may thus represent the neuronal substrate of the “universal grammar” shared by all of the world’s languages. The idea of the universal grammar is that in spite of the great variation in human languages, there still exists basic universal commonalities shared by all human languages and that these basic similarities in grammar reflect genetically determined features of the brain areas that acquire language. The linguist, Noam Chomsky, proposed that the universal grammar shared by all languages originates from innate brain organization that biologically prepares humans to learn language naturally and easily despite its great complexity. This idea is expressed in Chomsky's proposal of a Language Acquisition Device (LAD)--innate, genetically organized brain circuitry found in every normal human specialized for the easy acquisition of a human language that one is exposed to during childhood. Though popular among many psychologists and linguists for some time, more recently others have proposed that language acquisition does not require an LAD and that general learning mechanisms may be sufficient to account for language acquisition (Behme & Deacon, 2008).

In the classical Wernicke-Lichtheim-Geschwind model of the neurobiology of language, Broca's area is crucial for language production, Wernicke's area subserves language comprehension, and the information exchange between these areas (such as in reading aloud) is done via the arcuate fasciculus. Damage to any of these produces various forms of aphasia. Distributed models of cognitive function suggest that language function involves many areas of the brain not included in the classic neurobiological model of language function.

Adapted by Kenneth A. Koenigshofer, Ph.D., Chaffey College, from Broca's Area, Wernicke's Area, and other Language-Processing Areas in the Brain by Bruno Dubuc under a Copyleft license.