The earliest evidence of material culture is in the form of stone tools found on sites dated to 2.4 millions years ago (mya). This does not mean that early hominins did not use tools. New finds from Ethiopia indicate that A. afarensis used stone tools to extract marrow from bones 3.4 million years ago. What is not known is whether A. afarensis was making tools or simply using found rocks as tools. From material culture, biological psychologists and anthropologists can make inferences about cognitive capacities of hominins and early humans.

Harmand et al. (2015) reported that they had found 3.3 million-year-old (myo) stone tools at West Turkana, Kenya, which they proposed calling Lomekwian as the tools predate Oldowan tools (see below) by 700,000 years. What is particularly interesting is that the oldest Homo fossils found in West Turkana are 2.34 myo, although Au. afarensis is known from 3.39 mya. Questions remain as to which hominin left behind the assemblage (an assemblage is a group of artifacts found together at a specific site) of 149 artifacts, including flake fragments, worked cobbles, and cores, and how it compares with Oldowan tools. Material culture can give clues about cognitive capacities in hominins based on the assumption that more sophisticated tools would require more advanced cognitive abilities.

The oldest stone tool assemblage is the Oldowan tool industry (at least it is the oldest until the field comes to a consensus about Lomekwian tools). First identified at Olduvai Gorge, Tanzania by Louis and Mary Leakey, Oldowan tools are stone pebble tools manufactured using a hard percussion technique. This technique involves striking two stones together to knock off a flake or create an edge on a piece of stone. While this seems like a simple technique, to make one of these tools, the individual needs to be able to understand how the stone will break when struck. The presence of Oldowan tools is an indication of changing cognitive abilities. 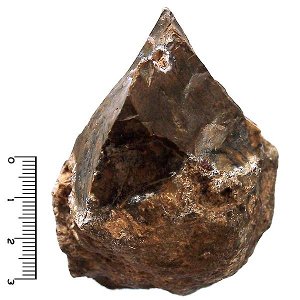 Oldowan tools were used for cutting, chopping and scraping. Homo hablis was not reliant primarily on hunting but instead scavenging. Researchers used Oldowan tools to scavenge a carcass and found that in about 10 minutes, it was possible to extract enough meat and bone to meet about 60% of the estimated daily caloric intake (approximately 1500 calories). Furthermore, researchers found that it was easy to scare off other scavengers and even some predators in order to gain access to the carcass. As a subsistence strategy, scavenging does have some advantages:

The first definitive evidence of hunting is from Schöningen, Germany in the form of wooden spears dated to 400,000 years. The artifacts were identified as spears because they have similar morphology to modern javelins, e.g., the balance point is 1/3 the way from the spear point. The spears are about 7 feet long with sharpened points and were found with the remains of butchered horses.

All researchers agree that Homo was making and using tools. Recently reported finds of stone tools 3.3 myo at West Turkana, Kenya may end up demonstrating that an early australopith was the first tool maker.

One thing we see with tool technologies is that as time passes the tools become more and more sophisticated. About 1.9 million years ago, Homo erectus invented a new sophisticated technology for making stone tools, which started with the hard percussion technique, but then employed a soft hammer technique to get more refined and sharper edges. This new tool industry is called the Acheulean.

The Acheulean tool industry, first found at St. Acheul, France, is characterized by bifacial tools. This means that the stone is worked on both sides. This tool industry is a marked step in the cognitive abilities of hominins because the tool has to be conceptualized prior to manufacturing. Dozens of flakes have to be removed precisely in order to maintain the symmetry of the tool and keep the edges straight. The signature tool of the Acheulean tool industry is the tear-drop shaped handaxe. Often referred to as the Swiss Army knife of the Pleistocene, the handaxe was an all-purpose tool used for a multitude of activities including digging, sawing, and cutting. Neanderthals took the next step in the evolution of stone tools by making tools for specialized tasks. These flake tools found in a cave in France developed out of a manufacturing technique characterized by preparing the core of raw material from which flakes can be struck and then worked. Sharper tools with a finer edge are produced using this technique. Neanderthals shaped these flakes into tools like scrapers, blades, and projectile points, specifically spear points. In fact, at Neanderthal caves sites in the Middle East, there are a higher percentage of spear points found than at neighboring Homo sapiens sites. Mousterian tools are a technological advance, taking a high degree of conceptualization and knowledge of the properties of the stone. The Upper Paleolithic of Europe begins 45,000 years ago and ushers in further advances in tool technology. Not only are there a wider variety of tools made, but new materials are used, including bone and antler. Blade tools emerge. A blade tool is a tool that is at least twice as long as it is wide. The benefit of blade tool technology is that blades can be easily knocked off a prepared core and then made into a wide range of tools, e.g., projectile points, drills, needles, scrapers, burins. By 31,000 years ago, these tools are widespread throughout Europe, allowing archaeologists to trace the movement of modern Homo sapiens. This tool industry disappears from the archeological record by 29,000 years ago. It is replaced by another tool industry, which is found at European sites until around 21,000 years ago. This tool industry is characterized by small blades and serrated knives, as well as projectile points that can be hafted onto a shaft. The small size of some of the projectile points leads some archeologists to surmise that the bow and arrow was invented during this period, although the first definitive evidence of arrows comes from Stellmoor, Germany (10,500 years ago). It does appear that the spearthrower was invented during this time frame. This is an important advance as it allowed a hunter to throw farther and with more force, making hunting the large animals of the period a little safer. Solutrean points are some of the best made points of the Upper Paleolithic. The technology flourished from around 21,000 to 16,000 years ago, but then disappears for thousands of years until a similar manufacturing process appears in North America during the Clovis period. To explain this, some archeologists propose that there was a migration of peoples from the Iberian Peninsula to North America in the late Pleistocene who carried the technology with them; however, there is little other evidence to support this contention. It is probable that the manufacturing techniques were rediscovered by North America's early inhabitants.

One of the reasons that Solutrean points were finely made was because the stone was heat treated before it was worked. Heat treatment means that the stone was placed in a fire for a period of time, making it possible to make pressure flaking more precise. Heat treating was also a hallmark of the Magdelenian tool industry, 16,000-11,000 years ago. Bone and antler tools flourish during the Magdelenian. Harpoons appear in the archeological record, with true barbed harpoons showing up around 13,000 years ago. Why Material Culture is Important to Biological Psychology

For biological psychology some familiarity with the development of tool making is important for what it suggests about the cognitive abilities of various hominin species and early humans. Some of the tools pictured above and the uses that they were put to show sophisticated cognitive abilities to imagine stone tools, how to shape them, and the purposes that they could serve once completed. Evolutionary psychologists such as Cosmides and Tooby from the University of California at Santa Barbara suggest that early humans filled what they refer to as "the cognitive niche," the use of reasoning including use of methods of adaptation such as weapons, traps, coordinated driving of game, and ability to use abstract concepts and metaphors to enhance reasoning about the world (Pinker, 2010). These abilities depend upon the properties of an evolving brain, specifically on the mechanisms involved in an emerging intelligence in early humans. Brain mechanisms involved are discussed in the chapter in this text on Intelligence, Cognition and Language.

The development of stone tools undergoes several stages and early stages preceded emergence of Homo sapiens. The discovery of stone tools gives clues about the cognitive abilities of hominins including Neanderthal and early humans. Creation of sophisticated stone tools required conceptualization of the tool before its manufacture and suggests emerging abilities to imagine and to plan (see Chapter 14 on Intelligence, Coginition, and Language).