Behaviourism viewed language as merely being observable behaviour whose development and elicitation was controlled by external stimuli:

A speaker possesses a verbal repertoire in the sense that responses of various forms appear in his behavior from time to time in relation to identifiable conditions. A repertoire, as a collection of verbal operants, describes the potential behavior of a speaker. To ask where a verbal operant is when a response is not in the course of being emitted is like asking where one’s knee-jerk is when the physician is not tapping the patellar tendon. (Skinner, 1957, p. 21)

Skinner’s (1957) treatment of language as verbal behaviour explicitly rejected the Cartesian notion that language expressed ideas or meanings. To Skinner, explanations of language that appealed to such unobservable internal states were necessarily unscientific:

It is the function of an explanatory fiction to allay curiosity and to bring inquiry to an end. The doctrine of ideas has had this effect by appearing to assign important problems of verbal behavior to a psychology of ideas. The problems have then seemed to pass beyond the range of the techniques of the student of language, or to have become too obscure to make further study profitable. (Skinner, 1957, p. 7)

Modern linguistics has explicitly rejected the behaviourist approach, arguing that behaviourism cannot account for the rich regularities that govern language (Chomsky, 1959b).

Modern linguistics has advanced beyond behaviourist theories of verbal behaviour by adopting a particularly technical form of logicism. Linguists assume that verbal behaviour is the result of sophisticated symbol manipulation: an internal generative grammar.

By a generative grammar I mean simply a system of rules that in some explicit and well-defined way assigns structural descriptions to sentences. Obviously, every speaker of a language has mastered and internalized a generative grammar that expresses his knowledge of his language. (Chomsky, 1965, p. 8)

A sentence’s structural description is represented by using a phrase marker, which is a hierarchically organized symbol structure that can be created by a recursive set of rules called a context-free grammar. In a generative grammar another kind of rule, called a transformation, is used to convert one phrase marker into another.

The recursive grammars that have been developed in linguistics serve two purposes. First, they formalize key structural aspects of human languages, such as the embedding of clauses within sentences. Second, they explain how finite resources are capable of producing an infinite variety of potential expressions. This latter accomplishment represents a modern rebuttal to dualism; we have seen that Descartes (1996) used the creative aspect of language to argue for the separate, nonphysical existence of the mind. For Descartes, machines were not capable of generating language because of their finite nature.

Interestingly, a present-day version of Descartes’ (1996) analysis of the limitations of machines is available. It recognizes that a number of different information processing devices exists that vary in complexity, and it asks which of these devices are capable of accommodating modern, recursive grammars. The answer to this question provides additional evidence against behaviourist or associationist theories of language (Bever, Fodor, & Garrett, 1968). Figure 3-8. How a Turing machine processes its tape. 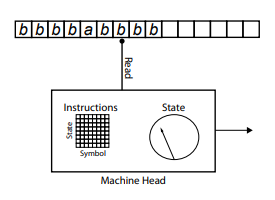 Figure 3-9. How a finite state automaton processes the tape. Note the differences between Figures 3-9 and 3-8.

It is obvious that a finite state automaton is a simpler device than a Turing machine, because it cannot change the ticker tape, and because it can only move in one direction along the tape. However, finite state machines are important information processors. Many of the behaviours in behaviour-based robotics are produced using finite state machines (Brooks, 1989, 1999, 2002). It has also been argued that such devices are all that is required to formalize behaviourist or associationist accounts of behaviour (Bever, Fodor, & Garrett., 1968).

One famous example of such a computational analysis was provided by Bever, Fodor, and Garrett (1968). They asked whether a finite state automaton was capable of accepting expressions that were constructed from a particular artificial grammar. Expressions constructed from this grammar were built from only two symbols, a and b. Grammatical strings in the sentence were “mirror images,” because the pattern used to generate expressions was bNabN where N is the number of bs in the string. Valid expressions generated from this grammar include a, bbbbabbbb, and bbabb. Expressions that cannot be generated from the grammar include ab, babb, bb, and bbbabb.

While this artificial grammar is very simple, it has one important property: it is recursive. That is, a simple context-free grammar can be defined to generate its potential expressions. This context-free grammar consists of two rules, where Rule 1 is S → a, and Rule 2 is a → bab. A string is begun by using Rule 1 to generate an a. Rule 2 can then be applied to generate the string bab. If Rule 2 is applied recursively to the central bab then longer expressions will be produced that will always be consistent with the pattern bNabN.

Bever, Fodor, and Garrett (1968) proved that a finite state automaton was not capable of accepting strings generated from this recursive grammar. This is because a finite state machine can only move in one direction along the tape, and cannot write to the tape. If it starts at the first symbol of a string, then it is not capable of keeping track of the number of bs read before the a, and comparing this to the number of bs read after the a. Because it can’t go backwards along the tape, it can’t deal with recursive languages that have embedded clausal structure.

Bever, Fodor, and Garrett (1968) used this result to conclude that associationism (and radical behaviourism) was not powerful enough to deal with the embedded clauses of natural human language. As a result, they argued that associationism should be abandoned as a theory of mind. The impact of this proof is measured by the lengthy responses to this argument by associationist memory researchers (Anderson & Bower, 1973; Paivio, 1986). We return to the implications of this argument when we discuss connectionist cognitive science in Chapter 4.

While finite state automata cannot accept the recursive grammar used by Bever, Fodor, and Garrett (1968), Turing machines can (Révész, 1983). Their ability to move in both directions along the tape provides them with a memory that enables them to match the number of leading bs in a string with the number of trailing bs.

Modern linguistics has concluded that the structure of human language must be described by grammars that are recursive. Finite state automata are not powerfulenough devices to accommodate grammars of this nature, but Turing machines are. This suggests that an information processing architecture that is sufficiently rich to explain human cognition must have the same power—must be able to answer the same set of questions—as do Turing machines. This is the essence of the physical symbol system hypothesis (Newell, 1980), which are discussed in more detail below. The Turing machine, as we saw in Chapter 2 and further discuss below, is a universal machine, and classical cognitive science hypothesizes that “this notion of symbol system will prove adequate to all of the symbolic activity this physical universe of ours can exhibit, and in particular all the symbolic activities of the human mind” (Newell, 1980, p. 155).