The symbolic systems that people use to capture and communicate their experiences form the basis of shared cultures.

A symbol is any object, typically material, which is meant to represent another (usually abstract) object, even if there is no meaningful relationship. Anthropologists have argued that, through the course of their evolution, human beings evolved a universal human capacity to classify experiences, and encode and communicate them symbolically, such as with written language. Since these symbolic systems were learned and taught, they began to develop independently of biological evolution (in other words, one human being can learn a belief, value, or way of doing something from another, even if they are not biologically related). That this capacity for symbolic thinking and social learning is a product of human evolution confounds older arguments about nature versus nurture. 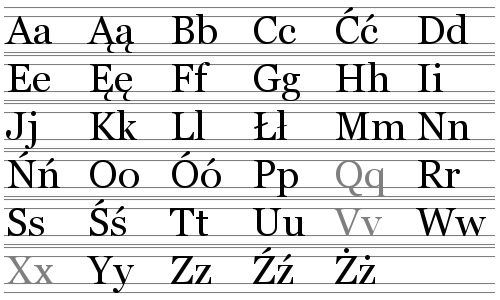 The Polish Alphabets: Cultures are shared systems of symbols and meanings. Alphabets are one example of a symbolic element of culture.

This view of culture argues that people living apart from one another develop unique cultures. Elements of different cultures, however, can easily spread from one group of people to another. The belief that culture is symbolically coded and can, therefore, be taught from one person to another, means that cultures, although bounded, can change. Culture is dynamic and can be taught and learned, making it a potentially rapid form of adaptation to changes in physical conditions. Anthropologists view culture as not only a product of biological evolution, but as a supplement to it; culture can be seen as the main means of human adaptation to the natural world.

This view of culture as a symbolic system with adaptive functions, which varies from place to place, led anthropologists to conceive of different cultures as defined by distinct patterns (or structures) of enduring (although arbitrary) conventional sets of meaning. These meanings took concrete form in a variety of artifacts such as myths and rituals, tools, the design of housing, and the planning of villages. Anthropologists distinguish between material culture and symbolic culture, not only because each reflects different kinds of human activity, but also because they constitute different kinds of data that require different methodologies to study.

The sociology of culture concerns culture as it is manifested in society: the ways of thinking, the ways of acting, and the material objects that together shape a people’s way of life. According to Max Weber, symbols are important aspects of culture: people use symbols to express their spirituality and the spiritual side of real events, and ideal interests are derived from symbols. According to sociologists, symbols make up one of the five key elements of culture, the others being language, values, beliefs, and norms.