Language may refer either to the human capacity for acquiring and using complex systems of communication, or to a specific instance of such.

Language may refer either to the specifically human capacity for acquiring and using complex systems of communication, or to a specific instance of such a system of complex communication. The scientific study of language in any of its senses is called linguistics.

The word language has at least two basic meanings: language as a general concept, and a specific linguistic system (e.g. French). Ferdinand de Saussure first explicitly formulated the distinction, using the French word langage for language as a concept, and langue as the specific instance of language.

One definition sees language primarily as the mental faculty that allows humans to undertake linguistic behaviour–to learn languages and produce and understand utterances. These kinds of definitions are often applied by studies of language within a cognitive science framework and in neurolinguistics.

Another definition sees language as a formal system of signs governed by grammatical rules of combination to communicate meaning. This definition stresses the fact that human languages can be described as closed structural systems consisting of rules that relate particular signs to particular meanings.

Yet another definition sees language as a system of communication that enables humans to cooperate. This definition stresses the social functions of language and the fact that humans use it to express themselves and to manipulate objects in their environment.

When described as a system of symbolic communication, language is traditionally seen as consisting of three parts: signs, meanings, and a code connecting signs with their meanings. The study of how signs and meanings are combined, used, and interpreted is called semiotics.

Languages, understood as the particular set of speech norms of a particular community, are also a part of the larger culture of the community that speaks them. Humans use language as a way of signalling identity with one cultural group and difference from others. Human languages are usually referred to as natural languages, and the science of studying them falls under the purview of linguistics. Human language is unique in comparison to other forms of communication, such as those used by animals, because it allows humans to produce an infinite set of utterances from a finite set of elements. 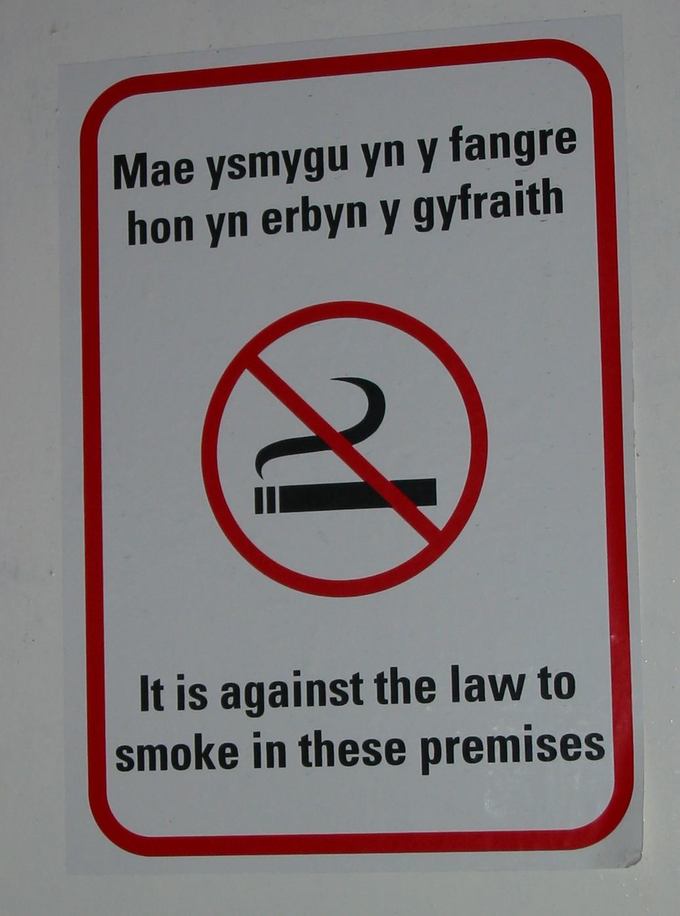 A Bilingual Sign: Members of a culture usually share a common language. Here, a bilingual sign in Wales tells both English and Welsh speakers that smoking is prohibited.