Social class is a measure of where a particular person falls on the social hierarchy.

A social hierarchy refers to the arrangement of people in society, with some people having more power and others having less. Social hierarchies, also referred to as social stratification, largely refers to socioeconomics, or the amount of material and social capital that an individual possesses. However, the socioeconomic classification is a stand-in for the amount of power possessed by an individual. Thus, one can layer and categorize individuals and classify them by group according to how much social power they possess.

Social class is the layer or social stratum denoting socioeconomic power into which an individual falls. In other words, social class describes how people are differentiated based upon their wealth or power. In the late eighteenth century, class came to replace such categories as estates, rank, and orders as the primary means of organizing society into hierarchical divisions. This corresponded to a general decrease in the significance ascribed to hereditary characteristics and an increase in the significance of wealth and income as indicators of position in the social hierarchy. While hereditary characteristics, such as being born into a wealthy family, continue to influence the ease with which one establishes adult social standing, the model that emphasizes class and achieved status maintains the status quo in capitalistic societies, particularly the United States.

The study of social class and hierarchies fundamentally asks questions about inequality. Sociology has a long history of studying stratification and teaching about various kinds of inequality, including economic inequality, racial and ethnic inequality, and gender inequality. Inequality means that people have unequal access to scarce and valued resources in society, such as health care, education, jobs, property, housing, and political influence. Sociologists study the causes and effects of inequality.

As such, sociologists pay particular attention to socioeconomic status, as it signifies an equation of power and wealth that denotes a particular form of inequality. Late-nineteenth and early-twentieth century German social theorist Max Weber proposed that socioeconomic status was configured by a combination of power, property, and prestige. For Weber, power refers to an individual’s ability to impose his will on others, regardless of their wishes. Property refers to the sum total of one’s possessions in addition to their income. Property therefore goes beyond income as a measure of social class because it measures accumulated wealth in addition to one’s earning potential. Prestige refers to the reputation or esteem associated with one’s position in society. Prestige used to be associated with family name, but now more frequently is yoked to occupation. Occupations like physicians or lawyers tend to hold more prestige than bartenders or janitors.

Power, prestige, and property tend to go hand in hand. An individual who is born into a wealthy family is likely to be born with more property and have access to better educational resources to achieve prestige, culminating in more power. Yet this is not always the case. For example, a professor may have little property, but has high prestige. Conversely, a “trust-fund baby” or someone left family money, might have much property, but little prestige in a society that values personal achievement.

Social class is commonly organized into a three-class model, by which individuals are separated into upper, middle, and lower classes. The upper class consists of the wealthy and powerful individuals who own and control the means of production. In the United States, the upper class is comprised of the richest 1-2% of the country, but other countries, particularly in Europe, still emphasize aristocracy and the family into which one was born. The middle class is the broadest swath of society, consisting of professional workers, small business owners, and low-level managers. These people are also referred to as “white collar workers. ” The lower class consists of people who work wage jobs rather than salaried positions. Referred to as “blue collar workers,” the lower class has little economic security and includes both individuals working lower-paying positions and unemployed and/or homeless people.

Social class in the United States looks a little bit different than one might suppose given the three-class model. Consider the following facts: Four hundred Americans have the same wealth as the bottom 50% of Americans combined. Twenty-five Americans have a combined income almost as great as the combined incomes of two billion of the world’s poor. In 2007, CEOs in the top American companies received an average salary of $10.5 million per year, 344 times the pay of the average worker. Half of American children will reside in a household that uses food stamps at some point in their childhoods. As you can see, the upper class in the United States contains very few Americans; the population is concentrated in the middle and lower classes. Yet, the few people in the upper class control a disproportionate amount of American wealth. 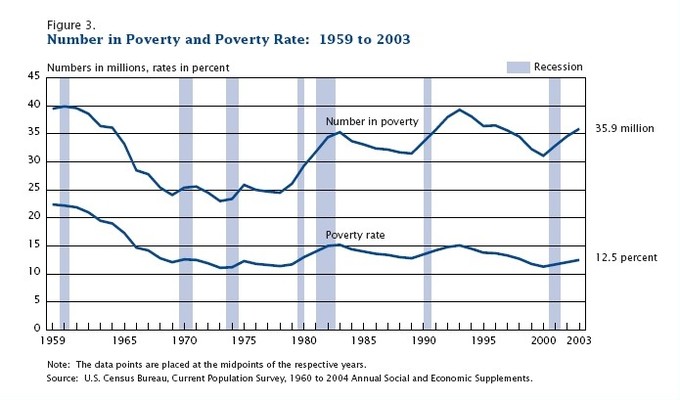 U.S. Poverty Rate 1959-2009: This chart depicts the number of people living in poverty during each year from 1959-2003. The poverty rate corresponds to what proportion of Americans live in the lowest economic strata of the hierarchical class system.