Norms are social rules of behavior, and a sanction is a form of punishment against violation of different norms.

Norms are the social rules that govern behavior in a community. Norms can be explicit (such as laws) or implicit (such as codes of polite behavior). Norms can be difficult to identify because they are so deeply instilled in members of a given society. Norms are learned by growing up in a particular culture and can be difficult to learn if one does not grow up in the same social milieu.

The act of violating a social norm is called deviance. Individuals usually have a much easier time identifying the transgression of norms than the norms themselves. For example, few Americans would think to tell a sociologist that it is a social norm to hold the door open for a fellow pedestrian entering a building if within a particular distance. However, someone might remark that another person is rude because he or she did not hold the door open. Studying norms and studying deviance are inseparable endeavors.

Like deviance, norms are always culturally contingent. To study norms and deviance, one must contextualize the action, or consider the action in light of all of the circumstances surrounding it. For example, one cannot merely say that showing up nude to a job interview is a violation of social norms. While it is usually social convention to show up in some manner of (usually professional ) dress to a job interview, this is most likely not the case for someone interviewing to be a nude model. To understand the norm, one must understand the context.

The violation of social norms, or deviance, results in social sanction. Different degrees of violation result in different degrees of sanction. There are three main forms of social sanction for deviance: 1) legal sanction, 2) stigmatization, and 3) preference for one behavior over another. Formal deviance, or the violation of legal codes, results in criminal action initiated by the state. Informal deviance, or violation of unwritten, social rules of behavior, results in social sanction, or stigma. Lesser degrees of social violation result in preference rather than stigmatization. While society might deem it preferable to show up to most job interviews wearing a suit rather than casual attire, you will likely not be out of the running for the job if you are wearing khakis rather than a suit. However, should you show up nude to most interviews, you would likely be stigmatized for your behavior, since it would be such a drastic departure from the norm.

We say that the norm that governs wearing professional rather than casual attire to a job interview is a folkway because its violation results in lesser degree of social sanction—the development of a preference rather than stigmatization. The norm that governs wearing clothing to most job interviews, rather than showing up nude, is a more because its violation results in a more serious degree of social sanction. 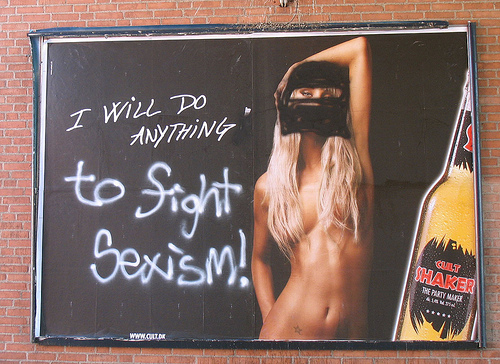 Misogyny in Billboards: This billboard has been defaced in order to highlight the sexual norms behind the advertisement.