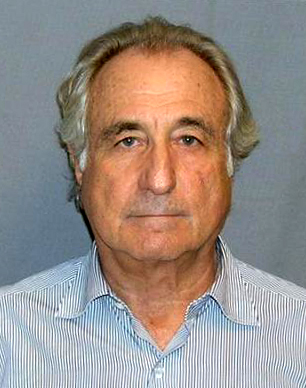 Ponzi scheme: In March 2009, the American financier Bernard Madoff pleaded guilty to 11 federal felonies and admitted to turning his wealth management business into a massive Ponzi scheme that defrauded thousands of investors of billions of dollars.

The term “white-collar crime” was coined in 1939 by Edwin Sutherland, who defined it as a “crime committed by a person of respectability and high social status in the course of his occupation” in a speech entitled “The White Collar Criminal” delivered to the American Sociological Society. Much of Sutherland’s work was to separate and define the differences in blue-collar street crimes such as arson, burglary, theft, assault, rape, and vandalism, which are often blamed on psychological, associational, and structural factors. Instead, white-collar criminals are opportunists, who learn to take advantage of their circumstances to accumulate financial gain. They are educated, intelligent, affluent, and confident individuals whose jobs involve unmonitored access to large sums of money.

Corporate crime deals with the company as a whole. The relationship that white-collar crime has with corporate crime is that they are similar because they both are involved within the business world. Their difference is that white-collar crime benefits the individual involved, and corporate crime benefits the company or the corporation. Insider trading, the trading of stock by someone with access to publicly unavailable information, is a type of fraud. One well-known insider trading case in the United States is the ImClone stock trading case. In December 2001, top-level executives sold their shares in ImClone Systems, a pharmaceutical company that manufactured an anti-cancer drug. The U.S. Securities and Exchange Commission investigated numerous top-level executives, as well as Martha Stewart, a friend of ImClone’s former chief executive who had also sold her shares at the same time. The SEC reached a settlement in 2005.

One common misconception about corporate crime is that its effects are mainly financial. For example, pharmaceutical companies may make false claims regarding their drugs and factories may illegally dump toxic waste. Indeed, the Hooker Chemical Company dumped toxic waste into the abandoned Love Canal in Niagara Falls and sold the land without disclosing the dumping. It was sold in the 1950’s to a private housing developer, whose residents began experiencing major health problems such as miscarriages and birth defects in the 1970’s.