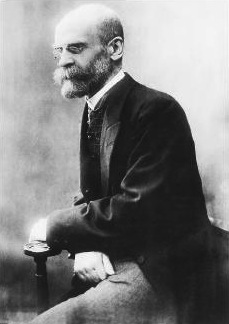 Émile Durkheim: Durkheim formally established the academic discipline and, with Karl Marx and Max Weber, is commonly cited as the principal architect of modern social science and father of sociology.

For the structural functionalist, deviance serves two primary roles in creating social stability. First, systems of recognizing and punishing deviance create norms and tell members of a given society how to behave by laying out patterns of acceptable and unacceptable behavior. In order to avoid unsettling society, one must be aware of what behaviors are marked as deviant. Second, these social parameters create boundaries between populations and enable an “us-versus-them” mentality within different groups. Deviance allows for the majorities to unite around their normativity, at the expense of those marked as deviant. Conversely, being marked as deviant can actual bolster solidarity within the marked community, as members take pride and ownership in their stigmatized identity and create cohesive units of their own (for example, members of the LGBT community unifying around Pride).

From a structural functionalist perspective, then, how does society change, particularly in regards to establishing norms and deviant behaviors? Deviance provides the key to understanding the disruption and re-calibration of society that occurs over time. Some traits will be stigmatized and can potentially cause social disruption. However, as traits become more mainstream, society will gradually adjust to incorporate the formerly stigmatized traits.

Take, again, the example of homosexuality. In urban America 50 years ago, homosexual behavior was considered deviant. On the one hand, this fractured society into those marked as homosexuals and those unmarked as normative heterosexuals. While this us-versus-them mentality solidified social identities and solidarities within the two categories, there was an overarching social schism. As time went on, homosexuality has come to be accepted as somewhat more mainstream. Accordingly, what originally appears as a fracturing of society actually reinforces social stability by enabling mechanisms for social adjustment and development.