Slavery is a system in which people are bought and sold as property, forced to work, or held in captivity against their will.

Slavery is a system under which people are treated as property to be bought and sold, and are forced to work. Slaves can be held against their will from the time of their capture, purchase, or birth; and can also be deprived of the right to leave, to refuse to work, or to demand compensation. Historically, slavery was institutionally recognized by many societies. In more recent times slavery has been outlawed in most societies, but continues through the practices of debt bondage, indentured servitude, serfdom, domestic servants kept in captivity, certain adoptions in which children are forced to work as slaves, child soldiers, and forced marriage.

Slavery predates written records and has existed in many cultures. The number of slaves today is higher than at any point in history, remaining as high as 12 million to 27 million. Most are debt slaves, largely in South Asia, who are under debt bondage incurred by lenders, sometimes even for generations. Human trafficking, or the illegal trade of humans, is primarily used for forcing women and children into sex industries.

Chattel slavery, so named because people are treated as the personal property, chattels, of an owner and are bought and sold as commodities, is the original form of slavery. When taking these chattels across national borders, it is referred to as human trafficking, especially when these slaves provide sexual services.

Debt bondage or bonded labor occurs when a person pledges himself or herself against a loan. The services required to repay the debt and their duration may be undefined. Debt bondage can be passed on from generation to generation, with children required to pay off their parents’ debt. It is the most widespread form of slavery today.

Forced labor is when an individual is forced to work against his or her will, under threat of violence or other punishment, with restrictions on their freedom. It is also used as a general term to describe all types of slavery and may also include institutions not commonly classified as slavery, such as serfdom, conscription and penal labor.

Evidence of slavery predates written records, and has existed in many cultures. Prehistoric graves from about 8000 BCE in Lower Egypt suggest that a Libyan people enslaved a San-like tribe. Slavery is rare among hunter-gatherer populations, as slavery is a system of social stratification. Mass slavery also requires economic surpluses and a high population density to be viable. Due to these factors, the practice of slavery would have only proliferated after the invention of agriculture during the Neolithic Revolution about 11,000 years ago.

In the United States, the most notorious instance of slavery is the Atlantic slave trade, through which African slaves were brought to work on plantations in the Caribbean Islands, Latin America, and the southern United States primarily. An estimated 12 million Africans arrived in the Americas from the 1600’s to the 1900’s. Of these, an estimated 645,000 were brought to what is now the United States. The usual estimate is that about 15 percent of slaves died during the voyage, with mortality rates considerably higher in Africa itself as the process of capturing and transporting indigenous peoples to the ships often proved fatal. Although the trans-Atlantic slave trade ended shortly after the American Revolution, slavery remained a central economic institution in the southern states of the United States, from where slavery expanded with the westward movement of population. By 1860, 500,000 American slaves had grown to 4 million. Slavery was officially abolished in 1863; but, even after the Civil War, many former slaves were essentially enslaved as tenant farmers. 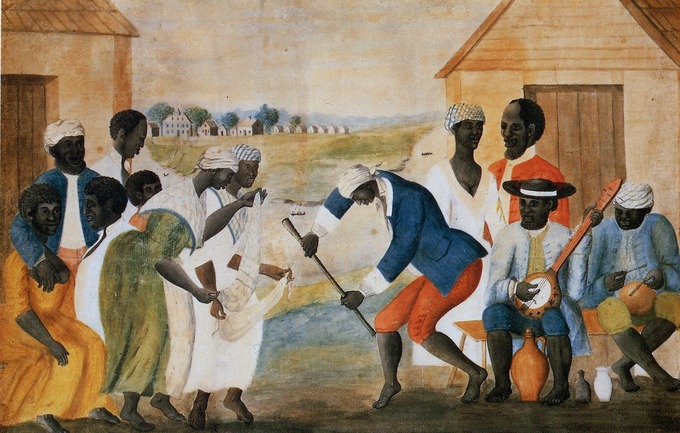 African American Slaves: Depiction of Slaves on a Virginian Plantation