Individual and household income remains one of the most prominent indicators of class status within the United States.

Income in the United States is most commonly measured by U.S. Census Bureau in terms of either household or individual income and remains one of the most prominent indicators of class status. Income is not one of its causes. In other words, income does not determine the status of an individual or household but rather reflects that status. Some say that income and prestige are the incentives provided by society in order to fill needed positions with the most qualified and motivated personnel possible.

Personal income is an individual’s total earnings from wages, investment interest, and other sources. In the United States, the most widely cited personal income statistics are the Bureau of Economic Analysis’s personal income and the Census Bureau’s per capita money income. The Census Bureau also produces alternative estimates of income and poverty based on broadened definitions of income that include many components that are not included in money income. Estimates are available by demographic characteristics of householders and by the composition of households. According to the US Census, men tend to have higher income than women, while Asians and whites earned more than African Americans and Hispanics.

The combination of two or more incomes allows for households to increase their income substantially without moving higher on the occupational ladder or attaining higher educational degrees. Thus, it is important to remember that the favorable economic position of households in the top two quintiles is in some cases, the result of combined income, rather than the high status of a single worker. 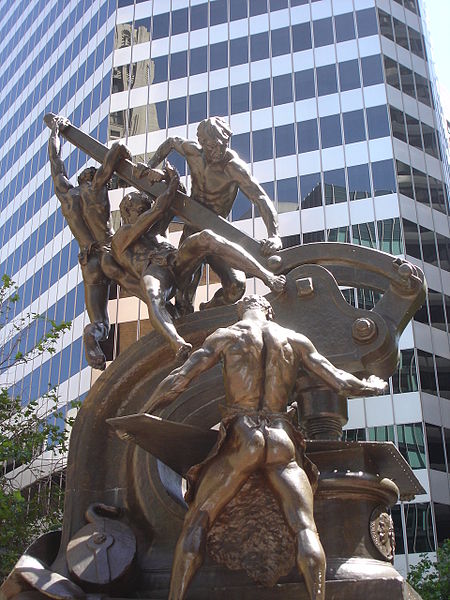 Working class: A monument to the working and supporting classes along Market Street in the heart of San Francisco’s Financial District, home to tens-of-thousands of professional upper class and managerial middle class workers.