The United States has a high level of income inequality, with a wide gap between the top and bottom brackets of earners. 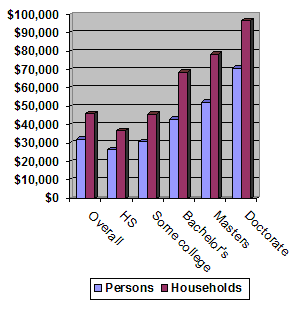 Unequal distribution of income between genders, races, and the population, in general, in the United States has been the frequent subject of study by scholars and institutions. Inequality between male and female workers, called the “gender wage gap,” has decreased considerably over the last several decades. During the same time, inequality between black and white Americans, sometimes called the “race wage gap,” has stagnated, not improving but not getting worse. Nevertheless, data from a number of sources indicate that overall income inequality in the United States has grown significantly since the late 1970s, widening the gap between the country’s rich and poor.

A number of studies by the U.S. Department of Commerce, Congressional Budget Office (CBO), and Internal Revenue Service (IRS) have found that the distribution of income in the United States has become increasingly unequal since the 1970s. Economist Paul Krugman and journalist Timothy Noah have referred to this trend as the “Great Divergence.” Since the 1970s, income inequality has grown almost continuously, with the exceptions being during the economic recessions in 1990-91, 2001, and 2007. The Great Divergence differs in some ways from the pre-Depression era inequality observed in the early 1900s (the last period of great inequality). Before 1937, a larger share of top earners’ income came from capital (interest, dividends, income from rent, capital gains). Post-1970, a higher proportion of the income of high-income taxpayers comes predominantly from employment compensation–60% of earners in the top 0.1% are executives, managers, supervisors, and financial professionals, and the five most common professions among the top 1% of earners are managers, physicians, administrators, lawyers, and financial specialists. Still, much of the richest Americans’ accumulated wealth is in the form of stocks and real estate.