The lower class consists of those at the bottom of the socioeconomic hierarchy who have low education, low income, and low status jobs.

The lower class in the United States refers to individuals who are at, or near, the lower end of the socioeconomic hierarchy. As with all social classes in the United States, the lower class is loosely defined, and its boundaries and definitions are subject to debate. When used by social scientists, the lower class is typically defined as service employees, low-level manual laborers, and the unemployed. Those who are employed in lower class occupations are often colloquially referred to as the working poor. Those who do not participate in the labor force, and who rely on public assistance, such as food stamps and welfare checks, as their main source of income, are commonly identified as members of the underclass, or, colloquially, the poor. Generally, lower class individuals work easily-filled employment positions that have little prestige or economic compensation. These individuals often lack a high school education.

Unemployment and the Poverty Line

A number of things can cause an individual to become unemployed. Two of the most common causes are low educational attainment and disabilities, the latter of which includes both physical and mental ailments that preclude educational or occupational success. The poverty line is defined as the income level at which an individual becomes eligible for public assistance. While only about 12% of households fall below the poverty threshold at one point in time, the total percentage of households that will, at some point during the course of a single year, fall below the poverty line, is much higher. Many such households waver above and below the line throughout a single year. Lower class households are at the greatest risk of falling below this poverty line, particularly if a job holder becomes unemployed. For all of these reasons, lower class households are the most economically vulnerable in the United States. 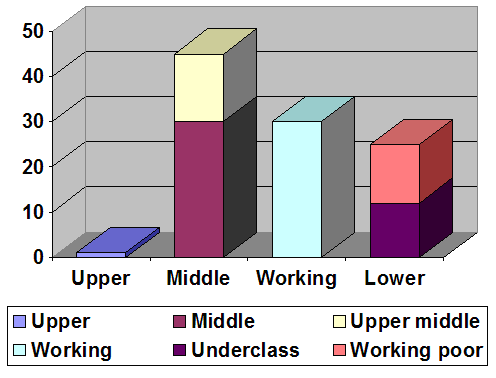 Gilbert Model: This is a model of the socio-economic stratification of American society, as outlined by Dennis Gilbert.