Social constructivists propose that there is no inherent truth to gender; it is constructed by social expectations and gender performance.

The social construction of gender comes out of the general school of thought entitled social constructionism. Social constructionism proposes that everything people “know” or see as “reality” is partially, if not entirely, socially situated. To say that something is socially constructed does not mitigate the power of the concept. Take, for example, money. Money is a socially constructed reality. Paper bills are worth nothing independent of the value individuals ascribe to them. The dollar is only worth as much as value as Americans are willing to ascribe to it. Note that the dollar only works in its own currency market; it holds no value in areas that don’t use the dollar. Nevertheless, the dollar is extremely powerful within its own domain.

Judith Butler is one of the most prominent social theorists currently working on issues pertaining to the social construction of gender. Butler is a trained philosopher and has oriented her work towards feminism and queer theory. Butler’s most known work is Gender Trouble: Feminism and the Subversion of Identity, published in 1991, which argues for gender performativity. This means that gender is not an essential category. The repetitious performances of “male” and “female” in accordance with social norms reifies the categories, creating the appearance of a naturalized and essential binary. Gender is never a stable descriptor of an individual, but an individual is always “doing” gender, performing or deviating from the socially accepted performance of gender stereotypes. Doing gender is not just about acting in a particular way. It is about embodying and believing certain gender norms and engaging in practices that map on to those norms. These performances normalize the essentialism of gender categories. In other words, by doing gender, we reinforce the notion that there are only two mutually exclusive categories of gender. The internalized belief that men and women are essentially different is what makes men and women behave in ways that appear essentially different. Gender is maintained as a category through socially constructed displays of gender.

Doing gender is fundamentally a social relationship. One does gender in order to be perceived by others in a particular way, either as male, female, or as troubling those categories. Certainly, gender is internalized and acquires significance for the individual; some individuals want to feel feminine or masculine. Social constructionists might argue that because categories are only formed within a social context, even the affect of gender is in some ways a social relation. Moreover, we hold ourselves and each other for our presentation of gender, or how we “measure up.” We are aware that others evaluate and characterize our behavior on the parameter of gender. Social constructionists would say that gender is interactional rather than individual—it is developed through social interactions. Gender is also said to be omnirelevant, meaning that people are always judging our behavior to be either male or female. 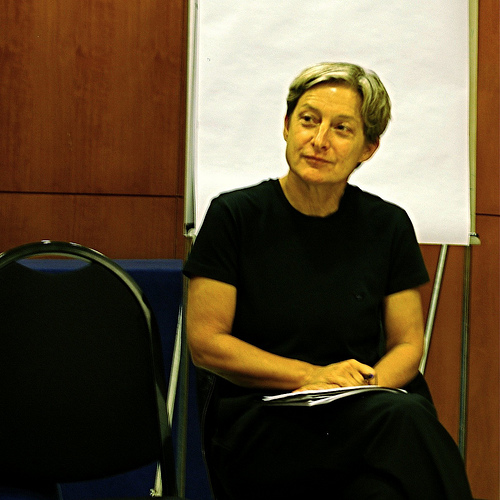 Judith Butler: Author of Gender Trouble: Feminism and the Subversion of Identity.