Gender identity is one’s sense of one’s own gender. It is the result of socialization, but it also has a biological basis.

Individuals whose gender identity aligns with their sex organs are said to be cisgender. Transgender individuals are those whose gender identity does not align with their sex organs. These people generally dress according to how they feel but do not make an drastic change within their sexual organs. Transsexuals, however, take drastic measures to assume their believed identity. This includes hormone therapy and sexual reassignment operations. Recently, there has been a growing gender/queer movement consisting of individuals who do not feel that their sex organs are mismatched to their gender identity, but who still wish to trouble the notion of a gender binary, considering it overly simplistic and misrepresentative.

Causes of Confusion in Gender Identity

What causes individuals to sense a sort of confusion between their biological gender and their gender identity? This question is hotly contested, with no clear answer. Some scientists argue that the sense of confusion is a biological result of the pre- and post-natal swinging of hormone levels and genetic regulation. Sociologists tend to emphasize the environmental impetuses for gender identity. Certainly, socialization, or the process of transferring norms, values, beliefs, and behaviors to group members, plays a significant part in how individuals learn and internalize gender roles and subsequently impact their gender identity.

Though the medical emphasis in some conversations about gender identity is frequently scrutinized by sociologists, there is clearly some biological basis to gender, even if it has more to do with appearances and social presentation than identity formation. Women have two X chromosomes, where men have one X and one Y chromosome. However, despite the deep relationship to biology, gender identity cannot only be biologically determined. However, gender identity has a larger social component that needs to be considered. For example, although a person may be biologically male, “he” may feel more comfortable with a female identity, which is a social construction based on how he feels, not his physical makeup.

As gender identities come to be more disputed, new legal frontiers are opening on the basis that a male/female gender binary, as written into the law, discriminates against individuals who either identify as the opposite of their biological sex or who identify as neither male nor female. On college campuses, gender-restrictive dorm housing is facing opposition by individuals who identify as neither a man nor a woman. Many public spaces and workplaces are instituting gender-neutral bathroom facilities. Gender identity has become a piece of international law as a branch of human rights doctrines. The Yogyakarta Principles, drafted by international legal scholars in 2006, provide a definition of gender identity in its preamble. In the Principles “gender identity” refers to each person’s deeply felt internal and individual experience of gender, which may or may not correspond with the biological sex assigned at birth, including the person’s sense of the body and other expressions of gender.

Gender identities, and the malleability of the gender binary, vary across cultures. In some Polynesian societies, fa’afafine are considered to be a third gender alongside male and female. Fa’afafine are accepted as a natural gender and are neither looked down upon nor discriminated against. They are biologically male, but dress and behave in a manner that Polynesians typically consider female. Fa’afafine are often physiologically unable to reproduce. Fa’afafine also reinforce their femininity by claiming to be only attracted to and receiving sexual attention from heterosexual men.

In the Indian subcontinent, a hijra is usually considered to be neither male nor female. The hijra form a third gender, although they do not enjoy the same acceptance and respect as individuals who identify along the gender binary.

The xanith form an accepted third gender in Oman, a society that also holds a gender binary as a social norm. The xanith are male, homosexual prostitutes whose dressing is male, featuring pastel colors rather than the white clothes traditionally worn by men, but their mannerisms are coded as female. Xanith can mingle with women where men cannot. However, similar to other men in Oman, xanith can marry women and prove their masculinity by consummating the marriage. This extreme cultural variation in notions of gender indicate the socially constructed nature of gender identity. 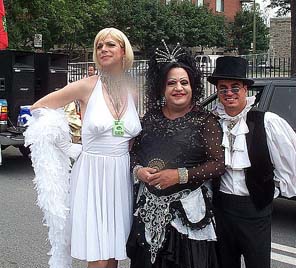 Men in Montreal Dressed in Drag: The image above exemplifies the subjective and personal understanding people have of their own gender identities.