The functionalist perspective sees society as a complex system whose parts work together to promote solidarity and stability. This approach looks at society through a macro-level orientation, which is a broad focus on the social structures that shape society as a whole, and looks at both social structure and social functions. Functionalism addresses society as a whole in terms of the function of its constituent elements, namely: norms, customs, traditions, and institutions. A common analogy, popularized by Herbert Spencer, presents these parts of society as “organs” that work toward the proper functioning of the “body” as a whole.

The functionalist perspective of gender inequality was most robustly articulated in the 1940s and 1950s, and largely developed by Talcott Parsons’ model of the nuclear family. This theory suggests that gender inequalities exist as an efficient way to create a division of labor, or as a social system in which particular segments are clearly responsible for certain, respective acts of labor. The division of labor works to maximize resources and efficiency. A structural functionalist view of gender inequality applies the division of labor to view predefined gender roles as complementary: women take care of the home while men provide for the family. Thus gender, like other social institutions, contributes to the stability of society as a whole.

This view has been criticized for reifying, rather than reflecting, gender roles. While gender roles, according to the functionalist perspective, are beneficial in that they contribute to stable social relations, many argue that gender roles are discriminatory and should not be upheld. The feminist movement, which was on the rise at the same time that functionalism began to decline, takes the position that functionalism neglects the suppression of women within the family structure. 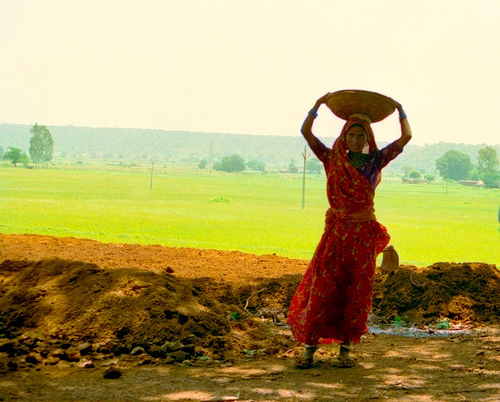 A Female Indian Construction: While the structural-functionalist perspective argues that gender inequalities exist as a form of the division of labor, the photograph above clearly illustrates that women need not be restricted to certain activities.