Women have historically been disadvantaged in education, and learning has often been segregated along gender lines.

Higher education has historically been regarded as a male domain. In early American history, women were sent to tutors and then to female seminaries, though training largely emphasized ladylike accomplishments, such as piano-playing, needlepoint, and literature, over serious academic education. Even as women’s education became more robust, it was considered to be distinct from men’s education. By the mid-1800s, several women’s colleges had been established, and many were coupled with men’s universities as coordinate colleges. In the 1970s and 1980s, some of these coordinate colleges were absorbed into the larger university to create coeducational (coed) universities with both men and women. The most famous women’s colleges in the United States were known as the Seven Sisters colleges and included Mount Holyoke College, Vassar College, Wellesley College, Smith College, Radcliffe College, Bryn Mawr College, and Barnard College. Today, five still operate as women’s-only colleges, Radcliffe no longer accepts students, and Vassar is coeducational.

Despite the integration of men and women in university classrooms, women continue to face gender -based disparities and biases. To this day, math and science are often thought to be, “male” fields, while subjects in the humanities are considered to be the more natural province of women. Of course, particular subjects are not inherently “male” or “female. ” However, gender norms are often informally inculcated at an early age, when elementary school teachers may encourage boys to pursue math and science and not do the same for girls. Further, boys generally receive more positive and negative attention in the classroom than do girls; as a result, the school environment can unintentionally become male-centered.

All of this, however, is changing. As has long been acknowledged, females now earn higher grades than males, and since the early 1990s, more women than men have been enrolled in college. Recently, women have also begun to outnumber men in graduate schools. 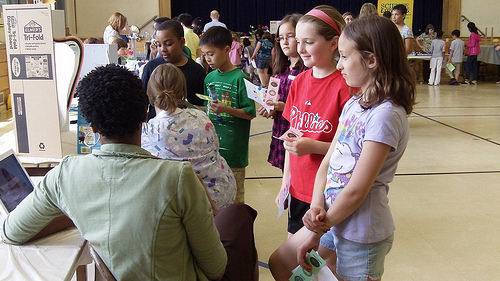 Women in Science: A group of girls and boys working on a science project together at Cheltenham Elementary School, Cheltenham, PA, USA