Despite legal protections, job discrimination against women still exists in the workplace.

Even though there are regulations that are used to promote equality within the workplace, occupational sexism, or any discriminatory practice, statement, or action based on a person’s sex that occurs in a place of employment, is still rampant. The most archetypical manifestation of occupational sexism is sexual harassment, or the intimidation, bullying, teasing, or coercion of a sexual nature, or the unwelcome or inappropriate promise of rewards in exchange for sexual favors. Sexual harassment may be a particular offer extended to an individual (i.e., a promotion in return for sexual rewards) or the generally atmosphere created within a workplace. If a workplace engenders an environment that is hostile to women, that workplace is in violation of the employment law that bans sexual harassment. However, sexual harassment is not synonymous with workplace inequality. Legally, sexual harassment can be directed by one person of either gender towards another person of either gender. Thus, sexual harassment is broader than the simple creation of a professional environment that is not welcoming to women. Women can perpetrate sexual harassment; men can be victims of sexual harassment. However, inequalities in the workplace typically refer to institutional barriers placed in the way of professional success for women.

Beyond sexual harassment, the most obvious instance of inequality in the workplace is wage discrimination. Frequently referred to as the gender pay gap, this phenomenon observes that women are consistently paid less for performing the same tasks as men. Women are estimated to earn 76% of what men earn for the same work. In other words, women make 76 cents for every dollar men earn for performing the same task.

Part of the pay gap can be attributed to the fact that, more often than men, women tend to engage in part-time work or work in lower paid industries. This explanation of the pay gap invokes the notion of the pink-collar worker. A pink-collar worker is a term for designating the types of jobs in the service industry that are considered to be stereotypically female, such as working as a waitress, nurse, teacher or secretary. The term attempts to distinguish this type of work from blue-collar and white-collar work. However, not even this acknowledgement explains the entirety of the wage gap, for even women working full-time in higher paid industries earn less than their male colleagues. 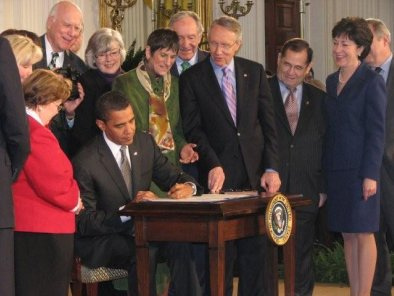 Restoring the Right to Equal Pay between Men and Women: President Obama signs the Lilly Ledbetter Fair Pay Act of 2009 into law.