Homeschooling is the education of children at home, rather than in other formal settings of public or private school.

Parents can have a number of motivations for wanting to homeschool their children. Among these, three of the most common are the following. Parents might be concerned about the traditional school environment, they might want to provide a particular type of religious or moral instruction, or they might simply be dissatisfied with the academic quality of traditional public or private schools.

Homeschooling may also reflect an individual’s parenting style. It can be used as a form of supplementary education, geared towards helping children succeed in specific circumstances. For example, children that attend poorly funded schools might benefit greatly from certain homeschool methods, like using the internet. In conjunction with this e-learning, homeschooling could theoretically be combined with a traditional school curriculum to produce more well-rounded results.

A homeschool cooperative is a cooperative of families who homeschool their children. These co-ops provide homeschooled children the opportunity to learn from other parents who might be more specialized in certain areas or subjects. Co-ops also provide critical opportunities for social interaction among homeschooled children. In these co-ops, children might take lessons or go on field trips together. Some co-ops also offer events like prom and graduation, to simulate certain seminal moments of a traditional educational experience. Through the use of the Internet, homeschoolers are beginning to simulate these cooperative activities online. Using social networking software, homeschoolers can chat, discuss threads in forums, share information, and even participate in online classes via blackboard systems similar to those used by colleges.

Unschooling refers to a range of educational philosophies and practices centered on allowing children to learn through their natural life experiences. These methods can include play, games, household responsibilities, work experience, and social interaction, and form a distinct alternative to a more traditional school curriculum. There are many who find this method of education controversial and potentially unethical. In unschooling, children are encouraged to utilize their own initiative to explore activities, with parental facilitation. The unschooling philosophy of education differs from conventional schooling because it believes that standard curricula and conventional grading methods are counterproductive to the educational growth of a child.

Numerous studies have found that homeschooled students, on average, outperform their peers on standardized tests. “Homeschooling Achievement,” a study conducted by National Home Education Research Institute (NHERI), an advocacy group, revealed the academic integrity of homeschooling. Among students who took the tests, the average homeschooled student outperformed his public school peers by 30 to 37 percentile points in every subject. Importantly, the study also indicated that public school performance gaps, such as those between races and genders, were virtually non-existent among homeschooled students.

In the 1970s, Raymond S. Moore and Dorothy N. Moore conducted four federally funded analyses of more than 8,000 early childhood studies. They eventually published their findings in 1975, and concluded that, “where possible, children should be withheld from formal schooling until at least ages eight to ten. ” 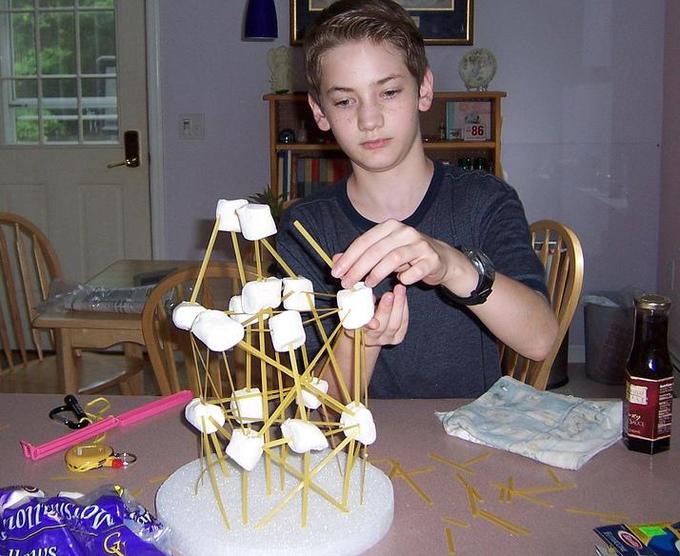 Homeschooler with Project: Homeschooler challenging The Leaning Tower of Pasta project, to build a tower using only pasta and marshmallows and measure its height and strength.