Credentialism refers to the common practice of relying on earned credentials when hiring staff or assigning social status.

Credentialism refers to the common practice of relying on earned credentials when hiring staff or assigning social status. Instead of directly evaluating an individual’s abilities, evaluators study that person’s credentials as a shortcut to estimate their competencies. Besides attesting to one’s abilities, credentials may also grant the holder access to restricted areas, information, or activities. For example, security clearances and press passes are credentials that grant access to otherwise restricted areas. A medical license is a credential that grants the ability to practice an otherwise restricted activity. 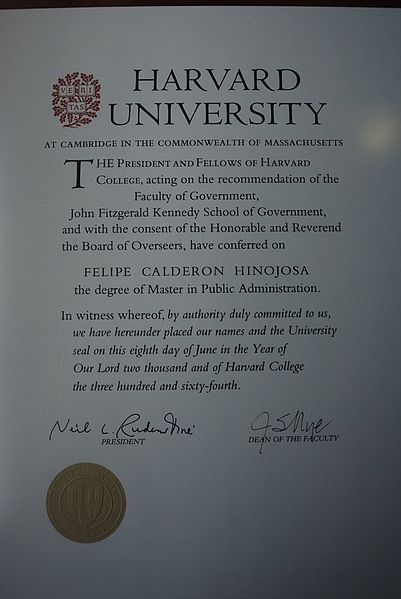 A diploma: A diploma is a type of credential.

The academic world makes very extensive use of credentials, such as diplomas, certificates, and degrees, in order to attest to the completion of specific training or education programs by students, and to attest to their successful completion of tests and exams. Receiving these credentials often leads to increased economic mobility and work opportunity.

Employers also commonly use credentials. For example, an employer may require a diploma, professional license, or academic degree. In a credential society, such certifications may become more important than actual skills or abilities. In some cases, employers may require formal credentials, such as an advanced academic degree, for a job that can be done perfectly well by applying skills acquired through experience or informal study. This type of credentialism is common in white-collar jobs, which require workers to have difficult-to-measure skills such as critical thinking. Rather than measure or evaluate those skills directly, employers assume that anyone able to earn a credential must possess those skills.

Over time, credentials may lose value, especially as more and more people earn that credential. This process is referred to as credential inflation. When credentials are inflated, they give individuals less advantage on the job market. A good example of credential inflation is the decline in the value of the U.S. high school diploma since the beginning of the twentieth century, when it was held by less than 10% of the population. At the time, high school diplomas attested to middle- class respectability, and for many years even provided access to managerial level jobs. More recently, however, the high school diploma barely qualifies the graduate for manual or menial service work.

Another indicator of credential inflation is the relative decline in the wage differential between those with college degrees and those with only high school diplomas. Jobs that were open to high school graduates a century ago now routinely require not just a bachelor’s degree, but a master’s degree as well—without an appreciable change in required skills.

According to sociologist Randall Collins, understanding credentialism can help explain class-based differences in educational attainment. In his 1979 book The Credential Society, Collins argued that public schools are socializing institutions that teach and reward middle class values of competition and achievement. In this system, Anglo-Protestant elites are selectively separated from other students and placed into prestigious schools and colleges, where they are trained to hold positions of power. By teaching middle class culture through the public education system, the elite class ensures a monopoly over positions of power, while others acquire the credentials to compete in a subordinate job market and economy. In this way, schools of medicine, law, and elite institutions have remained closed to members of lower classes.