A standardized test is a test that is administered and scored in a consistent manner.

Standardized tests are one common method by which schools measures students’ academic achievement. These tests may be given periodically and repeatedly to measure students’ progress and teachers’ effectiveness, or they may be given at key points during students’ careers to assess whether they are ready to progress to the next stage in their education—often, the next grade level or college. A standardized test is a test that is administered and scored in a consistent manner. They are designed so that the questions, conditions for administering, scoring procedures, and interpretations are purportedly without bias.

One of the main advantages of standardized testing is that the results can be empirically documented; the test scores can be shown to have a relative degree of validity and reliability, being generalizable and replicable. Standardized tests allow educators, policymakers, and admissions committees easily and fairly compare results from different students. It may be difficult to account for differences in educational culture across schools, difficulty of a given teacher’s curriculum, differences in teaching style, and techniques and biases that affect grading. This makes standardized tests useful for admissions purposes in higher education, where a school is trying to compare students from across the nation or across the world.

Critics worry that standardized tests lead teachers to “teach to the test. ” Standardized tests can be useful tools for assessing student achievement, and they can be used to focus instruction on desired outcomes, such as reading and math skills. However, critics feel that overuse and misuse of these tests harms teaching and learning by narrowing the curriculum. While it is possible to use a standardized test without letting its contents determine curriculum and instruction, frequently what is not tested is not taught, and how the subject is tested often becomes a model for how to teach the subject.

Further, standardized tests tend to measure only one sort of knowledge, while discounting creativity and diverse modes of expression. In essence, standardized tests use a one-size-fits-all theory, which is not always an effective way to measure students’ knowledge and comprehension. Students who fail standardized tests may be diagnosed with learning disabilities or disorders instead of recognized for the skills they have, which are consequently left unchallenged and undeveloped.

Finally, critics have expressed concern that standardized tests may create testing bias. Testing bias occurs when a test systematically favors one group over another, even though both groups are equal on the trait the test measures. Critics allege that test makers and facilitators tend to represent a middle class, white background and standardized testing matches the values, habits, and language of the test makers. Students who share that background may have an advantage on standardized tests that has nothing to do with academic achievement or aptitude but is due to shared cultural background.

No Child Left Behind

In 2001, the United States passed the No Child Left Behind Act, which requires all states to test students in public schools statewide to ensure that they are achieving the desired level of minimum education. Although some states already had statewide standardized testing requirements, for many states, this act required them to create new systems. The act reinvigorated debate over the accuracy, efficacy, and justice of relying on standardized tests to measure student achievement.

However, critics charge that standardized tests have become a mandatory curriculum placed into schools without public debate and without any accountability measures of its own. Many feel this ignores basic democratic principles in that control of schools’ curricula is removed from local school boards, which are the nominal curricular authority in the U.S. 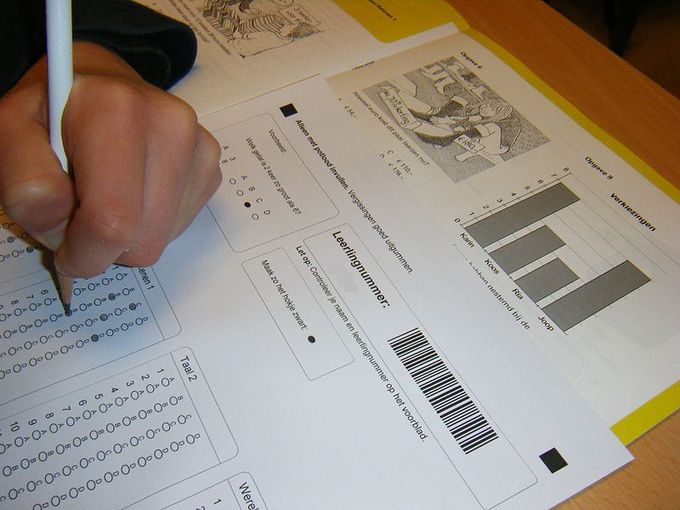 Multiple Choice Test: Some standardized testing uses multiple-choice tests, which are relatively inexpensive to score, but any form of assessment can be used.