The United States is a representative federal democracy driven by elections in which citizens’ and lobbyists’ diverse interests compete.

The U.S. federal government is composed of three distinct branches—legislative, executive, and judicial—whose powers are vested by the U.S. Constitution in the Congress, the President, and the federal courts, including the Supreme Court, respectively. 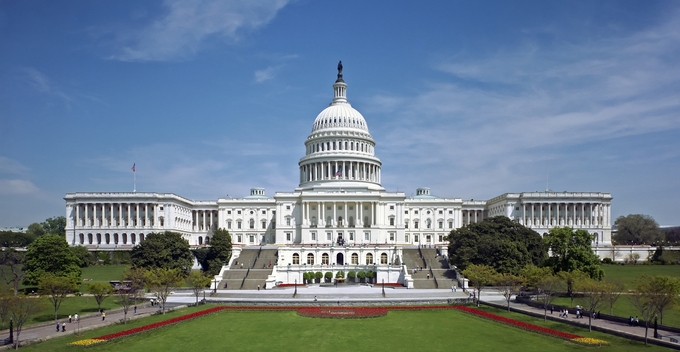 Congress: The legislative branch of the U.S. government.

The United States is a representative democracy. Citizens elect representatives to national, state, and local government; those representatives create the laws that govern U.S. society. Although nothing in U.S. law requires it, in practice, the political system is dominated by political parties. With rare exceptions, elections are decided between the two major parties: Democrats and Republicans. Although citizens vote for individual candidates, most candidates are affiliated with one part or another. Therefore, much of U.S. politics boils down to party politics.

The United States is also a diverse society, and citizens’ competing interests are reflected in politics. Citizens may have different voting preferences depending on their family backgrounds, the types of jobs they have, their race or age, whether they have children, and so on. To understand the electoral process, we must understand how different interests come into play.

Individual citizens are not the only players in U.S. politics. Although individual citizens are the only ones who can cast votes, special interest groups and lobbyists may influence elections and law-making with money and other resources. At times, this influence has grown so noticeable that some have called into question whether the U.S. is truly a democracy of the people or something more like an oligarchy of special interest groups. The media also play an important role in politics by influencing public sentiment and acting as an information filter.