A hunter-gatherer society is one in which most or all food is obtained by gathering wild plants and hunting wild animals, in contrast to agricultural societies which rely mainly on domesticated species. Hunter-gatherer societies tend to be very mobile, following their food sources. They tend to have relatively non-hierarchical, egalitarian social structures, often including a high degree of gender equality. Full-time leaders, bureaucrats, or artisans are rarely supported by these societies. Hunter-gatherer group membership is often based on kinship and band (or tribe) membership. Following the invention of agriculture, hunter-gatherers in most parts of the world were displaced by farming or pastoral groups who staked out land and settled it, cultivating it or turning it into pasture for livestock. Only a few contemporary societies are classified as hunter-gatherers, and many supplement their foraging activity with farming or raising domesticated animals.

Feudalism was a set of legal and military customs in medieval Europe that flourished between the nineteenth and fifteenth centuries. Broadly speaking, feudalism structured society around relationships based on land ownership. Feudal lords were landowners; in exchange for access to land for living and farming, serfs offered lords their service or labor. This arrangement (land access in exchange for labor) is sometimes called “manorialism,” an organizing principle of rural economy that originated in the villa system of the Late Roman Empire. Manorialism was widely practiced in medieval western and parts of central Europe, until it was slowly replaced by the advent of a money-based market economy and new forms of agrarian contract. 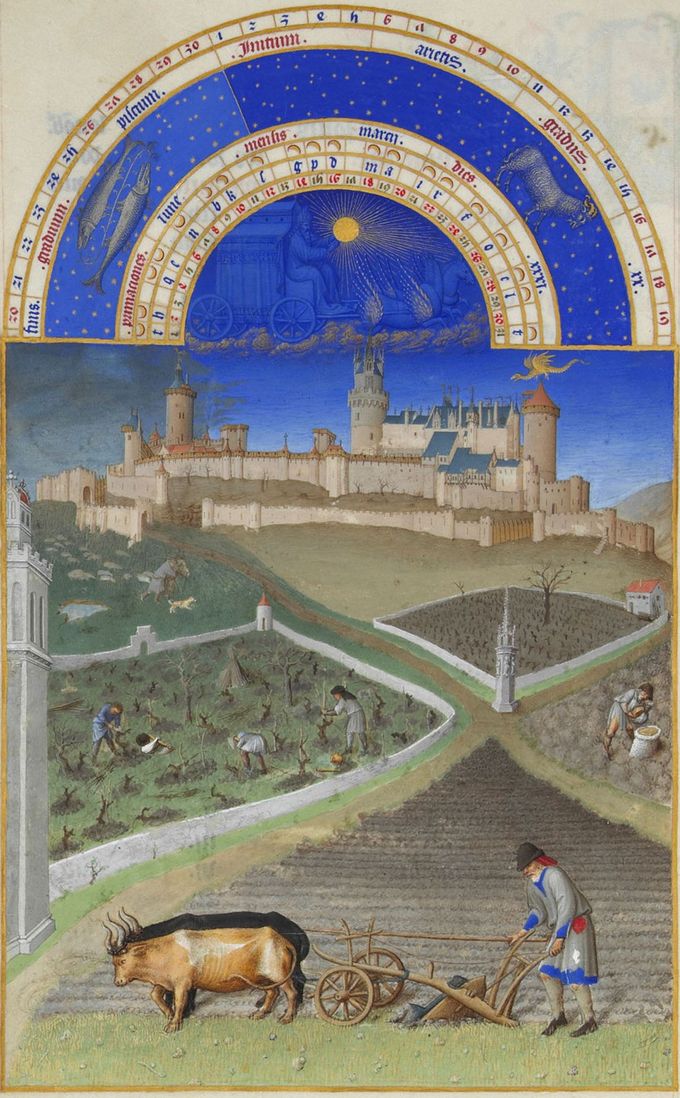 Feudal Manor: This painting from feudal time shows how fields surrounded the feudal manor where the noble who owned the farms lived–a good depiction of how society was oriented around the agricultural economy.

Feudal Systems: This video explains the basics of feudal societies in Europe.