During the Industrial Revolution (roughly 1750 to 1850) changes in technology had a profound effect on social and economic conditions.

The Industrial Revolution was a period from 1750 to 1850 where changes in agriculture, manufacturing, mining, transportation, and technology had a profound effect on the social, economic and cultural conditions of the times. It began in the United Kingdom, and then subsequently spread throughout Western Europe, North America, Japan, and eventually the rest of the world. The Industrial Revolution marks a major turning point in history; almost every aspect of daily life was influenced in some way. Most notably, average income and population began to exhibit unprecedented sustained growth. In the two centuries following 1800, the world’s average per capita income increased more than tenfold, while the world’s population increased over sixfold.

The First Industrial Revolution, which began in the 18th century, merged into the Second Industrial Revolution around 1850, when technological and economic progress gained momentum with the development of steam-powered ships, railways, and later in the 19th century with the internal combustion engine and electrical power generation. The period of time covered by the Industrial Revolution varies with different historians. Eric Hobsbawm held that it “broke out” in Britain in the 1780s and was not fully felt until the 1830s or 1840s, while T. S. Ashton held that it occurred roughly between 1760 and 1830. 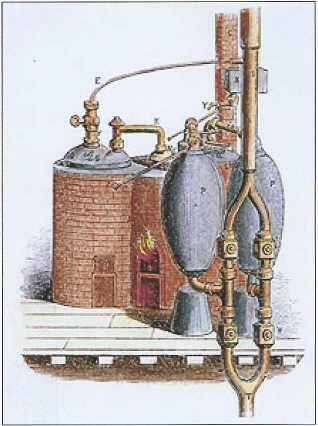 Savery Engine: The Savery Engine, invented in 1698, was one of the first steam engines available commercially. It dramatically changed how the economic system functioned.

Great Britain provided the legal and cultural foundations that enabled entrepreneurs to pioneer the Industrial Revolution. Starting in the later part of the 18th century, there began a transition in parts of Great Britain’s previously manual labor and draft-animal-based economy toward machine-based manufacturing. It started with the mechanization of the textile industries, the development of iron-making techniques and the increased use of refined coal. Trade expansion was enabled by the introduction of canals, improved roads and railways. With the transition away from an agricultural-based economy and toward machine-based manufacturing came a great influx of population from the countryside and into the towns and cities, which swelled in population.

The introduction of steam power fuelled primarily by coal, wider utilization of water wheels, and powered machinery—mainly in textile manufacturing —underpinned the dramatic increases in production capacity. The development of all-metal machine tools in the first two decades of the 19th century facilitated the manufacturing of more production machines for manufacturing in other industries. The effects spread throughout Western Europe and North America during the 19th century, eventually affecting most of the world, a process that continues as industrialization today. The impact of this change on society was enormous.