Deindustrialization occurs when a country or region loses industrial capacity due to relocation or increased efficiency.

The city of Detroit, and the U.S. automobile industry, are regarded as the prototypical examples of deindustrialization’s negative effects, but Detroit is not an isolated example. The population of the United States has nearly doubled since the 1950s, adding approximately 150 million people. However, during this same period (1950–2007), the population of the great American manufacturing cities declined significantly. Detroit, Cleveland, Pittsburgh, St. Louis, and Buffalo have all lost half their population or more in the past half-century. Baltimore lost almost a third of its population, and Philadelphia lost nearly a quarter of its own.

In the United States, the deindustrialization of Midwestern and Northeastern cities has occurred in response to shifting patterns in the geography of production. Just as many American companies have moved their manufacturing operations to developing nations, where they can hire workers for far lower wages, so too have manufacturers in the United States relocated from the heavily unionized Northeast and Midwest toward the Southeast and Southwest. In these areas, right-to-work states limit the power of unions to raise wages. Additionally, the high supply of workers forces those workers who are employed to accept low wages.

The Impact of Technology

In order to save costs, manufacturers have done more than merely relocate. They have also eliminated jobs, as technological innovation has reduced the demand for manual labor. Though total industrial employment has been relatively stable over the past forty years, the overall U.S. labor force has increased dramatically, resulting in a massive reduction in the percent of the labor force that is engaged in industry. While 35% of workers were involved in industry in the late 1960s, under 20% are today. Manufacturing is thus less prominent in American life and the American economy now than it has been at any other point for hundreds of years. 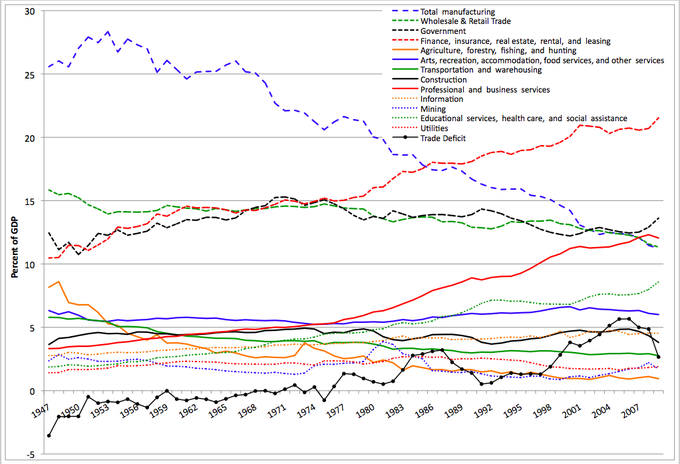 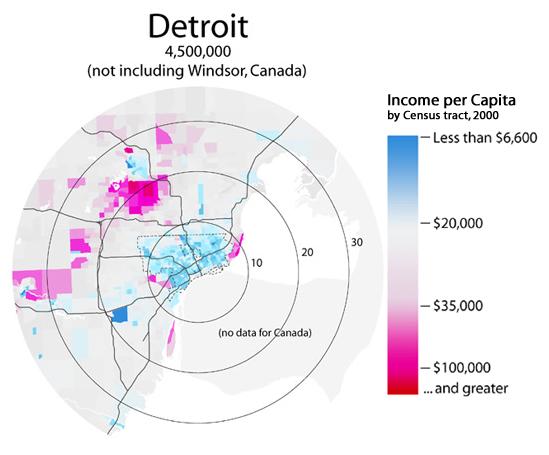 Detroit: This map depicts the economic ramifications of deindustrialization in the Detroit area. The Detroit neighborhoods closest to the city center who were the most dependent upon manufacturing jobs are the most blighted.