Division of labor is the specialization of cooperative labor in specific, circumscribed tasks and roles.

In a division of labor, the production process is broken down into a sequence of stages, and workers are assigned to particular stages. Cooperative labor is specialized into specific, circumscribed tasks, which individuals in specific roles accomplish. Historically, as societies have developed more and more complex divisions of labors, the economies of those societies has grown proportionately, both in trade output and living standards. A complex division of labor appears to be strongly correlated with the rise of capitalism, as well as the rise of complex industrial production.

While it can have benefits for productivity, the specialization of labor can lead to workers with low overall skills and low enthusiasm. This viewpoint was extended and refined by Karl Marx. He described the process of specialization as alienation. In his view, workers become more and more specialized, and their work becomes more and more repetitive, until eventually they are completely alienated from the production process. He believed people could only be liberated if they were involved in the full scope of economic production, and he considered the strict division of labor only a temporary, necessary evil.

Globalization and the Division of Labor

In the modern world, those who think most about the division of labor are involved in the fields of management and organization. Now that labor has been specialized not just nationally but globally, people often wonder what type of division of labor would be the most beautiful, fair, ideal, and efficient. It is widely accepted that the division of labor is to a great extent inevitable, simply because no one person can do every task at once. Labor hierarchy is a very common feature of the modern workplace structure, but of course, the way these hierarchies are structured can be influenced by a variety of factors.

The issue reaches its broadest scope in conversations about globalization, which is often euphemistically defined as the expansion of world trade based on comparative advantage. Theoretically, in an era of globalization, countries specialize in the work they can do at the lowest opportunity cost. Critics however allege that international specialization cannot be explained sufficiently in terms of “the work nations do best. ” Instead, critics think this specialization is guided more by commercial criteria, which favor some countries over others. 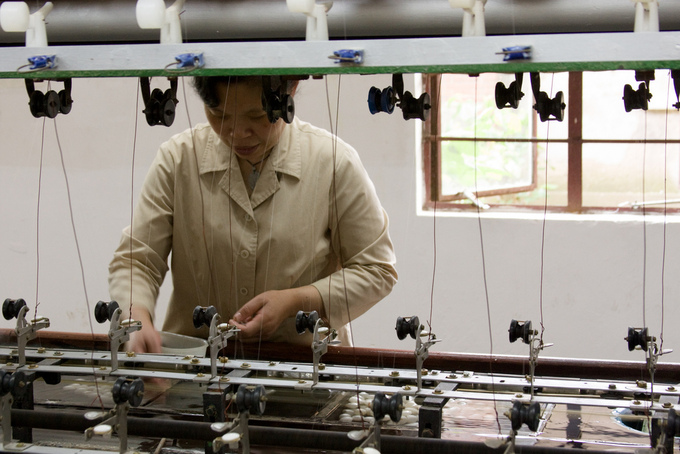 Division of Labor: A highly specialized division of labor is often used in factories, such as this Chinese silk factory.