Demography is the statistical study of human populations. It can be a very general science that can be applied to any kind of dynamic living population, or one that changes over time or space. It encompasses the study of the size, structure, and distribution of these populations, and spatial and/or temporal changes in them in response to birth, migration, aging, and death.

Human population growth depends on the rate of natural increase, or the fertility rate minus the mortality rate, and net migration. The basics of demography can be reduced to this formula:

Natural increase refers to the increase in population not due to migration, and it can be calculated with the fertility rate and the mortality rate. Net migration is the mathematical difference between those migrating into a country and those migrating out of a country.

This basic equation can be applied to populations and subpopulations. For example, the population size of ethnic groups or nationalities within a given society or country is subject to the same sources of change as the national population. However, when dealing with ethnic groups, “net migration” might have to be subdivided into physical migration and ethnic re-identification (assimilation). Individuals who change their ethnic self-labels or whose ethnic classification in government statistics changes over time may be thought of as migrating or moving from one population subcategory to another. More generally, while the basic demographic equation holds true by definition, the recording and counting of events (births, deaths, immigration, emigration) and the enumeration of the total population size are subject to error. Allowance needs to be made for error in the underlying statistics when any accounting of population size or change is made. 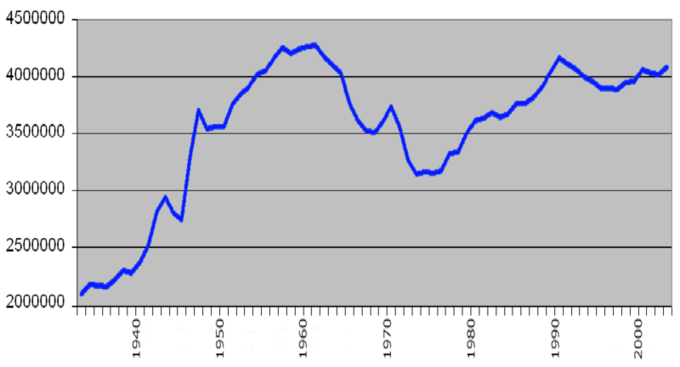 US Fertility Rate: The US fertility rate has leveled off at about 2.0, which is nearly equal to the replacement level. This means that population growth in the US is due to inward migration, rather than a high birthrate.