Most of the postwar development was focused on suburbanization, but urban revitalization was a statutory corollary to suburban development. Title I of the Housing Act of 1949 kick-started the urban renewal program that would reshape American cities. The Act provided federal funding to cities to cover the cost of acquiring declining areas of cities perceived to be slums. According to the act, the federal government paid two-thirds of the cost of acquiring the site, called “the write down,” while the local governments paid for the remaining one-third. Most of the money went towards purchasing the property from the present owners. This process is called ” eminent domain,” or the process through which the government acquires private property for the larger public good. The process of eminent domain requires that the government provide due compensation but does not necessarily require the private property owner’s consent. In the post-war era, after acquiring the properties, the government gave much of the land to private developers to construct new urban housing. These federal incentives to revitalize declining urban areas were particularly attractive to cities that were in states of economic decline at the time.

Urban revitalization certainly provides potential for future urban growth, though the story of successes and failures remains mixed so far. Urban renewal can have many positive effects. Replenished housing stock might signify an improvement in quality; urban renewal may increase density and reduce sprawl, and it might have economic benefits that improve the economic competitiveness of the city’s center. It can also improve cultural and social amenities, through the construction of public spaces and community centers, and can improve safety. 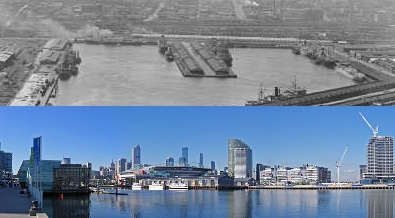