Whether you believe that we are headed for environmental disaster and the end of human existence as we know it, or you think people will always adapt to changing circumstances, we can see clear patterns in population growth. Societies develop along a predictable continuum as they evolve from unindustrialized to postindustrial. Demographic transition theory (Caldwell and Caldwell 2006) suggests that future population growth will develop along a predictable four- or five-stage model.

In stage one, pre-industrial society, death rates and birth rates are high and roughly in balance. An example of this stage is the United States in the 1800s. All human populations are believed to have had this balance until the late 18th century, when this balance ended in Western Europe. In fact, growth rates were less than 0.05% at least since the Agricultural Revolution over 10,000 years ago.

Population growth is typically very slow in this stage, because the society is constrained by the available food supply; therefore, unless the society develops new technologies to increase food production (e.g. discovers new sources of food or achieves higher crop yields), any fluctuations in birth rates are soon matched by death rates.

In stage two, that of a developing country, the death rates drop rapidly due to improvements in food supply and sanitation, which increase life spans and reduce disease. Afghanistan is currently in this stage.

In Europe, the death rate decline started in the late 18th century in northwestern Europe and spread to the south and east over approximately the next 100 years. Without a corresponding fall in birth rates this produces an imbalance, and the countries in this stage experience a large increase in population.

In stage three, birth rates fall. Mexico’s population is at this stage. Birth rates decrease due to various fertility factors such as access to contraception, increases in wages, urbanization, a reduction in subsistence agriculture, an increase in the status and education of women, a reduction in the value of children’s work, an increase in parental investment in the education of children and other social changes. Population growth begins to level off. The birth rate decline in developed countries started in the late 19th century in northern Europe.

While improvements in contraception do play a role in birth rate decline, it should be noted that contraceptives were not generally available nor widely used in the 19th century and as a result likely did not play a significant role in the decline then.

It is important to note that birth rate decline is caused also by a transition in values; not just because of the availability of contraceptives.

During stage four there are both low birth rates and low death rates. Birth rates may drop to well below replacement level as has happened in countries like Germany, Italy, and Japan, leading to a shrinking population, a threat to many industries that rely on population growth. Sweden is considered to currently be in Stage 4. As the large group born during stage two ages, it creates an economic burden on the shrinking working population. Death rates may remain consistently low or increase slightly due to increases in lifestyle diseases due to low exercise levels and high obesity and an aging population in developed countries. By the late 20th century, birth rates and death rates in developed countries leveled off at lower rates.

Some scholars delineate a separate fifth stage of below-replacement fertility levels. Others hypothesize a different stage five involving an increase in fertility. The United Nations Population Fund (2008) categorizes nations as high-fertility, intermediate-fertility, or low-fertility. The United Nations (UN) anticipates the population growth will triple between 2011 and 2100 in high-fertility countries, which are currently concentrated in sub-Saharan Africa. For countries with intermediate fertility rates (the United States, India, and Mexico all fall into this category), growth is expected to be about 26 percent. And low-fertility countries like China, Australia, and most of Europe will actually see population declines of approximately 20 percent. 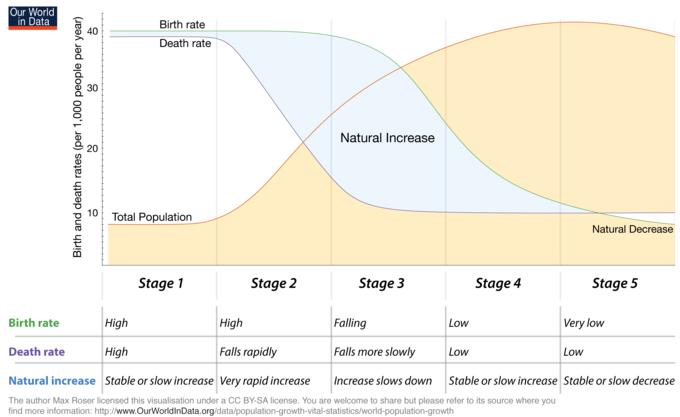 As with all models, this is an idealized picture of population change in these countries. The model is a generalization that applies to these countries as a group and may not accurately describe all individual cases. The extent to which it applies to less-developed societies today remains to be seen. Many countries such as China, Brazil and Thailand have passed through the Demographic Transition Model (DTM) very quickly due to fast social and economic change. Some countries, particularly African countries, appear to be stalled in the second stage due to stagnant development and the effect of AIDS.