The gender pay gap, or the difference between male and female earnings, is primarily due to discriminatory social processes.

Most who study the gender wage gap assume that it is not due to differences in ability between genders – while in general men may be better at physical labor, the pay gap persists in other employment sectors as well. This implies that the gender gap stems from social, rather than biological, origins.

In order to determine whether the gender gap is a result of implicit or explicit discrimination, we can look at the adjusted and unadjusted wage gap. The unadjusted wage gap refers to a measure of the wage gap that does not take into account differences in personal (e.g., age, education, the number of children, job tenure, occupation, and occupational crowding) and workplace (e.g., the economic sector and place of employment) characteristics between men and women. Parts of the raw pay gap can be attributed to the fact that women, for instance, tend to engage more often in part-time work and tend to work in lower paid industries. The remaining part of the raw wage gap that cannot be explained by variables that are thought to influence pay is then referred to as the adjusted gender pay gap and may be explicitly discriminatory.

The total wage gap in the United States is 20.4 percent. A study commissioned by the United States Department of Labor, prepared by Consad Research Corp, asserts that there are “observable differences in the attributes of men and women that account for most of the wage gap. Statistical analysis that includes those variables has produced results that collectively account for between 65.1 and 76.4 percent of a raw gender wage gap of 20.4 percent, and thereby leave an adjusted gender wage gap that is between 4.8 and 7.1 percent. ” Thus, only a relatively small part of the wage gap is due to explicit discrimination. 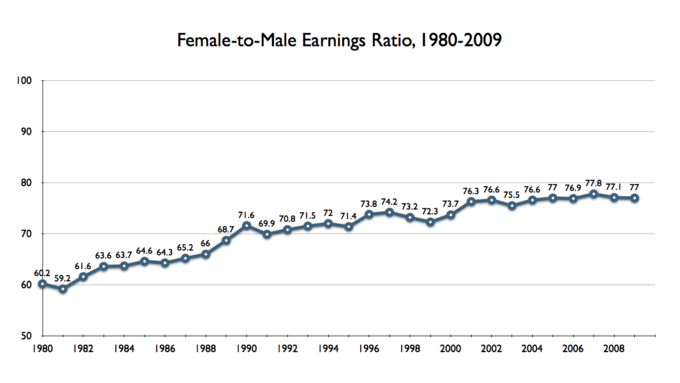 Gender Pay Gap in the United States, 1980-2009: This graph depicts the female-to-male earnings ratio, median yearly earnings among full-time, year-round workers from 1980 to 2009.

We can assume that the remainder (the gap attributed to the measured variables) is the result of implicit discrimination, that is, social forces that pressure women into working part time, to stay home with their children, to be less aggressive in pursuing promotions or raises, etc. A 2010 report by the European Foundation for the Improvement of Living and Working Conditions, for example, pointed out that “the major reasons for this gap are very often related to both horizontal and vertical segregation – or the fact that women tend to choose lower-paid professions, reach a ‘glass ceiling’ in their careers, or have their jobs valued less favourably. The origins of these factors could be judged as being discriminatory in themselves, that is, when they are rooted in gender stereotypes of male and female occupations. ”