Juvenile delinquency is participation in illegal behavior by minors. Most legal systems prescribe specific procedures for dealing with juveniles, such as juvenile detention centers and courts. A juvenile delinquent is a person who is typically under the age of 18 and commits an act that would have otherwise been charged as a crime if the minor was an adult. Depending on the type and severity of the offense committed, it is possible for persons under 18 to be charged and tried as adults.

Juvenile delinquency can be separated into three categories:

Young men disproportionately commit juvenile delinquency. Feminist theorists and others have examined why this is the case. One suggestion is that ideas of masculinity may make young men more likely to offend. Being tough, powerful, aggressive, daring, and competitive becomes a way for young men to assert and express their masculinity. Alternatively, young men may actually be naturally more aggressive, daring, and prone to risk-taking. According to a study led by Florida State University criminologist Kevin M. Beaver, adolescent males who possess a certain type of variation in a specific gene are more likely to flock to delinquent peers. The study, which appeared in the September 2008 issue of the Journal of Genetic Psychology, is the first to establish a statistically significant association between an affinity for antisocial peer groups and a particular variation (called the 10-repeat allele) of the dopamine transporter gene (DAT1).

There is also a significant skew in the racial statistics for juvenile offenders. When considering these statistics, which state that Black and Latino teens are more likely to commit juvenile offenses, it is important to keep the following in mind: poverty is a large predictor of low parental monitoring, harsh parenting, and association with deviant peer groups, all of which are in turn associated with juvenile offending. The majority of adolescents who live in poverty are racial minorities.

Family factors that may have an influence on offending include:

Delinquency prevention is the broad term for all efforts aimed at preventing youth from becoming involved in criminal or other antisocial activity. Because the development of delinquency in youth is influenced by numerous factors, prevention efforts need to be comprehensive in scope. Prevention services may include activities like substance abuse education and treatment, family counseling, youth mentoring, parenting education, educational support, and youth sheltering. Increasing availability and use of family planning services, including education and contraceptives, helps to reduce unintended pregnancy and unwanted births—which are risk factors for delinquency.

Juvenile Delinquency: Juvenile delinquency refers to antisocial or illegal behavior by children or adolescents, for dealing with juveniles, such as juvenile detention centers. There are a multitude of different theories on the causes of crime, most if not all of which can be applied to the causes of youth crime. 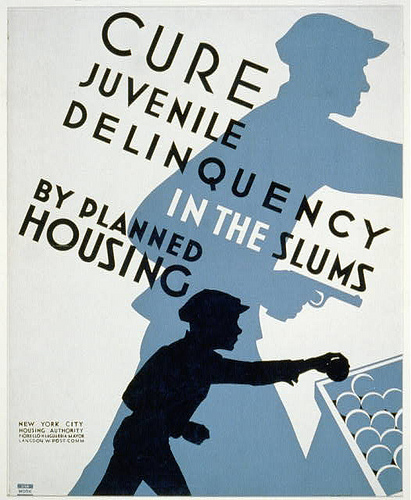 Cure Juvenile Delinquency by Planned Housing: Poster promoting planned housing as a method to deter juvenile delinquency, showing silhouettes of a child stealing a piece of fruit and as an older minor involved in armed robbery.