Caste is an elaborate and complex social system that combines some or all elements of endogamy, hereditary transmission of occupation, social class, social identity, hierarchy, exclusion, and power. Caste as a closed social stratification system in which membership is determined by birth and remains fixed for life; castes are also endogamous, meaning marriage is proscribed outside one’s caste, and offspring are automatically members of their parents’ caste.

Although Indian society is often associated with the word “caste,” the system is common in many non-Indian societies. Caste systems have been found across the globe, in widely different cultural settings, including predominantly Muslim, Christian, Hindu, Buddhist, and other societies. UNICEF estimates that identification and sometimes discrimination based on caste affects 250 million people worldwide.

In colonial Spain, throughout South America and Central America, castas referred to a method of stratifying people based on race, ethnicity, and social status and was in common usage since the 16th century. The term caste was applied to Indian society in the 17th century, via the Portuguese. The Dutch also used the word caste in their 19thcentury ethnographic studies of Bali and other parts of southeast Asia. In Latin American sociological studies, the word caste often includes multiple factors such as race, ethnicity, and economic status. Multiple factors were used to determine caste in part because of numerous mixed births during the colonial times between natives, Europeans, and people brought in as slaves or indentured laborers. 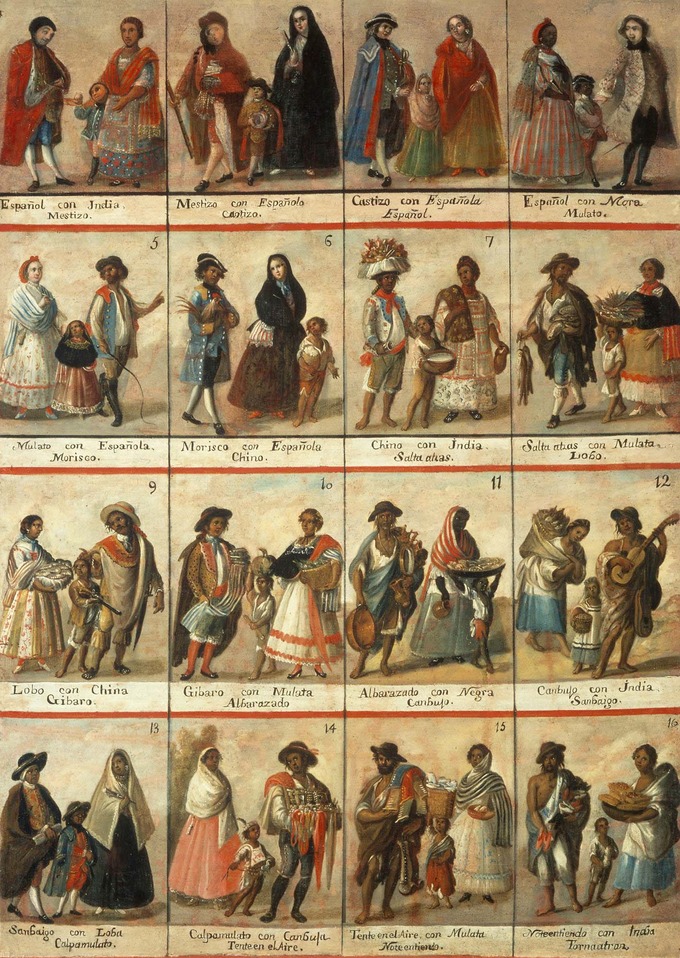 Colonial Mexican Caste System: After the Spanish colonized Mexico, one’s position in a caste system depended on how European or indigenous one seemed. Both biological and sociocultural indicators were used to measure ethnicity.

Some literature suggests that the term caste should not be confused with race or social class. Members of different castes in one society may belong to the same race or class, as in India, Japan, Korea, Nigeria, Yemen, or Europe. Usually, but not always, members of the same caste are of the same social rank, have a similar group of occupations, and typically have social mores which distinguish them from other groups. Some sociologists suggest that caste systems come in two forms: racial caste systems and non-racial caste systems.

Caste is often associated with India. Historically, the caste system in India consisted of four well known categories (Varnas): Brahmins (priests), Kshatriyas (warriors), Vaishyas (commerce), Shudras (workmen). Some people left out of these four caste classifications were called “outcasts” or “untouchables” and were shunned and ostracized. Ancient Indian legal texts, such as Manusmṛti (ca. 200 BCE-200 CE), suggest that caste systems have been part of Indian society for millennia.

Other Indian scriptures suggest ancient Indian law was not rigid about endogamy within castes. For example, Nāradasmṛti, another text on ancient Indian law, written after Manusmṛti and dated to be over 1400 years old, approves of many, but not all marriages across caste lines. The Nāradasmṛti set out categories of approved marriages between castes. Several statutes recognized offsprings of mixed castes, much like caste system of colonial Spain. Ancient Indian texts also suggest that India’s social stratification system was controversial, a topic of profound historical debates within the Indian community, and inspired efforts for reform.

Social systems identical to caste systems found elsewhere in the world have historically existed in Europe as well. European societies were historically stratified according to closed, endogamous social systems with groups such as the nobility, clergy, bourgeoisie, and peasants. These caste groups had distinctive privileges and unequal rights, which were not a product of informal advantages such as wealth and were not rights enjoyed as citizens of the state. These unequal and distinct privileges were sanctioned by law or social mores, were exclusive to each distinct social subset of society, and were inherited automatically by offspring. In some European countries, these closed social classes or castes were given titles, followed mores and codes of behavior specific to their caste, and even wore distinctive dress. Nobility rarely married commoners, and if they did, they lost certain privileges. Caste endogamy wasn’t limited to royalty; in Finland, for example, it was a crime—until modern times—to seduce and defraud into marriage by declaring a false social class. In parts of Europe, these closed social caste groups were called estates.

Along with the three or four estates recognized in various European countries, an additional group existed below the bottom layer of the hierarchical society. This bottom social strata with limited rights was understood to serve those with recognized social status. Prominent for centuries throughout Europe, and enduring through the mid-19thcentury in some areas, members of this numerically large caste were called serfs. In some countries such as Russia, the 1857 census found that over 35 percent of the population could be categorized as a serf. Serf mobility was heavily restricted, and in matters of marriage and living arrangements, they were subject to rules dictated by the State, the Church, by landowners, and by often rigid local custom and tradition.