We will examine families from a variety of theoretical perspectives. A theoretical perspective, or more briefly, a “theory” is not just an idea that someone has. Rather it is a structural framework, explanation, or tool that has been tested and evaluated over time. Theories are developed and utilized via scholarship, research, discussion, and debate. Theories help us to understand the world in general, and in this instance the ways in which families form, function, interact with, and experience the world. In addition, we will define several key concepts important to your understanding of equity and families in this course.

Because the study of families overlaps several disciplines, we will utilize sociological, human development, psychological, and anthropological theories and concepts.

Play this video to learn about five of the foundational theories related to the study of families: Social Exchange, Symbolic Interaction, Feminist, Postmodern, and Life Course. (It is recommended that you play it at 1.25x speed and you can disregard the references to chapter numbers) 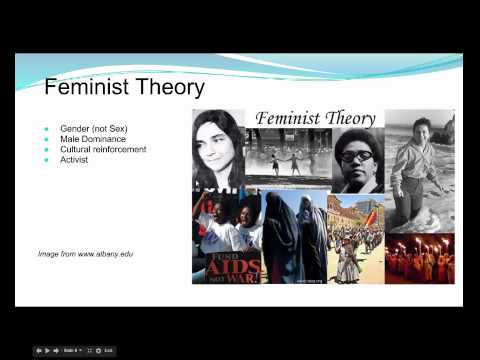 A YouTube element has been excluded from this version of the text. You can view it online here: https://openoregon.pressbooks.pub/families/?p=626

Here is a summary table of these five theories and a couple of others that are commonly used in this field and that will be discussed in this text.

What is a Social Problem?

The objective component is this: For any condition or behavior to be considered a social problem, it must have negative consequences for large numbers of people, as each chapter of this book discusses. How do we know if a social problem has negative consequences? Reasonable people can and do disagree on whether such consequences exist and, if so, on their extent and seriousness, but ordinarily a body of data accumulates—from work by academic researchers, government agencies, and other sources—that strongly points to extensive and serious consequences. The reasons for these consequences are often hotly debated, and sometimes, as we shall see in certain chapters in this book, sometimes the very existence of these consequences is disputed. A current example is climate change: Although the overwhelming majority of climate scientists say that climate change (changes in the earth’s climate due to the buildup of greenhouse gases in the atmosphere) is real and serious, fewer than two-thirds of Americans (64 percent) in a 2011 poll said they “think that global warming is happening.”[1]

This type of debate is probably akin to the age-old question: If a tree falls in a forest and no one is there to hear it, is a sound made? As such, it is not easy to answer, but it does reinforce one of the key beliefs of the social constructionist view: Perception matters at least as much as reality, and sometimes more so. In line with this belief, social constructionism emphasizes that citizens, interest groups, policymakers, and other parties often compete to influence popular perceptions of many types of conditions and behaviors. They try to influence news media coverage and popular views of the nature and extent of any negative consequences that may be occurring, the reasons underlying the condition or behavior in question, and possible solutions to the problem.

Social constructionism’s emphasis on perception has a provocative implication: Just as a condition or behavior may not be considered a social problem even if there is strong basis for this perception, so may a condition or behavior be considered a social problem even if there is little or no basis for this perception. The “issue” of women in college provides a historical example of this latter possibility. In the late 1800s, leading physicians and medical researchers in the United States wrote journal articles, textbooks, and newspaper columns in which they warned women not to go to college. The reason? They feared that the stress of college would disrupt women’s menstrual cycles, and they also feared that women would not do well in exams during “that time of the month.” [4] We now know better, of course, but the sexist beliefs of these writers turned the idea of women going to college into a social problem and helped to reinforce restrictions by colleges and universities on the admission of women.

In a related dynamic, various parties can distort certain aspects of a social problem that does exist: politicians can give speeches, the news media can use scary headlines and heavy coverage to capture readers’ or viewers’ interest, businesses can use advertising and influence news coverage. News media coverage of violent crime provides many examples of this dynamic.[5][6] The news media overdramatize violent crime, which is far less common than property crime like burglary and larceny, by featuring so many stories about it, and this coverage contributes to public fear of crime. Media stories about violent crime also tend to be more common when the accused offender is Black and the victim is White and when the offender is a juvenile. This type of coverage is thought to heighten the public’s prejudice toward African Americans and to contribute to negative views about teenagers.

Many individuals experience one or more social problems personally. For example, many people are poor and unemployed, many are in poor health, and many have family problems, drink too much alcohol, or commit crime. When we hear about these individuals, it is easy to think that their problems are theirs alone, and that they and other individuals with the same problems are entirely to blame for their difficulties.

Sociology takes a different approach, as it stresses that individual problems are often rooted in problems stemming from aspects of society itself. This key insight informed C. Wright Mills’s (1959) The sociological imagination. The classic distinction between personal troubles and public issues. Personal troubles refer to a problem affecting individuals that the affected individual, as well as other members of society, typically blame on the individual’s own personal and moral failings. Examples include such different problems as eating disorders, divorce, and unemployment. Public issues, whose source lies in the social structure and culture of a society, refer to social problems affecting many individuals. Problems in society thus help account for problems that individuals experience. Mills felt that many problems ordinarily considered private troubles are best understood as public issues, and he coined the term sociological imagination to refer to the ability to appreciate the structural basis for individual problems.

To illustrate Mills’s viewpoint, let’s use our sociological imaginations to understand some contemporary social problems. We will start with unemployment, which Mills himself discussed. If only a few people were unemployed, Mills wrote, we could reasonably explain their unemployment by saying they were lazy, lacked good work habits, and so forth. If so, their unemployment would be their own personal trouble. But when millions of people are out of work, unemployment is best understood as a public issue because, as Mills put it,[7] “the very structure of opportunities has collapsed. Both the correct statement of the problem and the range of possible solutions require us to consider the economic and political institutions of the society, and not merely the personal situation and character of a scatter of individuals” (p. 9).

The high US unemployment rate stemming from the severe economic downturn that began in 2008 provides a telling example of the point Mills was making. Millions of people lost their jobs through no fault of their own. While some individuals are undoubtedly unemployed because they are lazy or lack good work habits, a more structural explanation focusing on lack of opportunity is needed to explain why so many people were out of work. If so, unemployment is best understood as a public issue rather than a personal trouble.

Picking up on Mills’s insights, William Ryan pointed out that Americans typically think that social problems such as poverty and unemployment stem from personal failings of the people experiencing these problems, not from structural problems in the larger society.[9] Using Mills’s terms, Americans tend to think of social problems as personal troubles rather than public issues. As Ryan put it, they tend to believe in blaming the victim rather than blaming the system.

To help us understand a blaming-the-victim ideology, let’s consider why poor children in urban areas often learn very little in their schools. According to Ryan, a blaming-the-victim approach would say the children’s parents do not care about their learning, fail to teach them good study habits, and do not encourage them to take school seriously. This type of explanation, he wrote, may apply to some parents, but it ignores a much more important reason: the sad shape of America’s urban schools, which, he said, are overcrowded, decrepit structures housing old textbooks and out-of-date equipment. To improve the schooling of children in urban areas, he wrote, we must improve the schools themselves and not just try to “improve” the parents.

As this example suggests, a blaming-the-victim approach points to solutions to social problems such as poverty and illiteracy that are very different from those suggested by a more structural approach that blames the system. If we blame the victim, we would spend our limited dollars to address the personal failings of individuals who suffer from poverty, illiteracy, poor health, eating disorders, and other difficulties. If instead we blame the system, we would focus our attention on the various social conditions (decrepit schools, cultural standards of female beauty, and the like) that account for these difficulties. A sociological understanding suggests that the latter approach is ultimately needed to help us deal successfully with the social problems facing us today.

This text is written to complement the Difference, Power, and Discrimination outcomes of Oregon State Univeristy and Linn-Benton Community College in Albany and Corvallis, Oregon. This statement appears on the Oregon State University webpage:

The Difference, Power, and Discrimination Program works with faculty across all fields and disciplines at Oregon State University to create inclusive curricula that address intersections of gender, race, class, sexual identity, age, ability, and other institutionalized systems of inequity and privilege in the United States.

Therefore, an equity lens is applied throughout the text as we aim to understand what families need, how and whether those needs are met, and the role that social institutions play in family outcomes.

To understand families from this perspective, we focus on how families experience personal troubles and social problems as well as the disproportionate ways that families experience them. In addition we talk about social justice, which has many definitions but commonly includes equal access or opportunity, equal treatment, and equal rights. In this text we will provide historical and cross-cultural context related to social justice, but focus on the current status of families in the United States. Here are two websites if you would like to know more about how social justice is defined and how to contribute to greater social justice in the United States:

You will also see thinking related to Critical Theory and Critical Race Theory (CRT). Both of these theories examine institutions and power structures. In this short video, Megan Paulson defines both theories in the first minute. She then goes on to talk about the positive effect on students of all races and ethnicities when they have usable terms and language to talk about what they experience in terms of difference in their daily lives. A YouTube element has been excluded from this version of the text. You can view it online here: https://openoregon.pressbooks.pub/families/?p=626

It is the intent of the authors of this text that students use what they learn in this class to understand their own experiences, and the experiences of others, better. Discussion in the face-to-face and online environments is encouraged. This text examines what families need, and how institutions and society can support those needs, or get in the way of meeting needs. This will lead to better understanding and analysis of how existing social processes and institutions contribute to family inequity.