In the United States, as in most countries, people with more education tend to enjoy higher economic status, power, prestige, and levels of income. One might expect, then, that all people would try to maximize their education. After all, education is meant to be the great equalizer by which anyone can climb the rungs of the social hierarchy. However, evidence suggests that certain groups have unequal access to education.

In the United States, public schools provide free education through 12th grade, but post-secondary college education is not free. Costs include tuition and room and board, even at public institutions. Those who are unable to afford the expense of college, therefore, have unequal access. According to a 2005 report from the OECD, the United States is tied for first place with Switzerland when it comes to annual spending per student on its public schools, with each of those two countries spending more than $11,000. However, the United States is ranked 37th in the world in education spending as a percentage of gross domestic product. All but seven of the leading countries are in the third world, ranked high because of a low GDP. U.S. public schools lag behind the schools of other developed countries in the areas of reading, math, and science.

Even in high school, economic, family, and social demands may lead some students to drop out before finishing. Thus, sociologists have observed that dropout rates vary among different social groups. For instance, dropout rates are lowest among Asian Americans, followed closely by whites. But Hispanic, black, and Native American students drop out at rates nearly double those of Asian and white students. Overall, the dropout rate has been declining for decades, since at least the 1970s, yet it remains disproportionately high for minority students.

School funding varies by geographic location. In part, the disparities in dropout rates may be a symptom of disparities in access to high quality education. In some areas, the best high schools are private high schools that may be out of reach for poorer students who cannot afford the tuition. Even public schools may receive different rates of funding; in particular, schools in poorer areas tend to receive less funding because school funding is often tied to property taxes. Thus, students who live in poorer areas may have less access to high quality education. One of the biggest debates in funding public schools is funding by local taxes or state taxes. The federal government supplies around 8.5% of the public school system funds, according to a 2005 report by the National Center for Education Statistics. The remaining split between state and local governments averages 48.7% from states and 42.8% from local sources. However, the division varies widely. In Hawaii local funds make up 1.7%, while state sources account for nearly 90.1%. 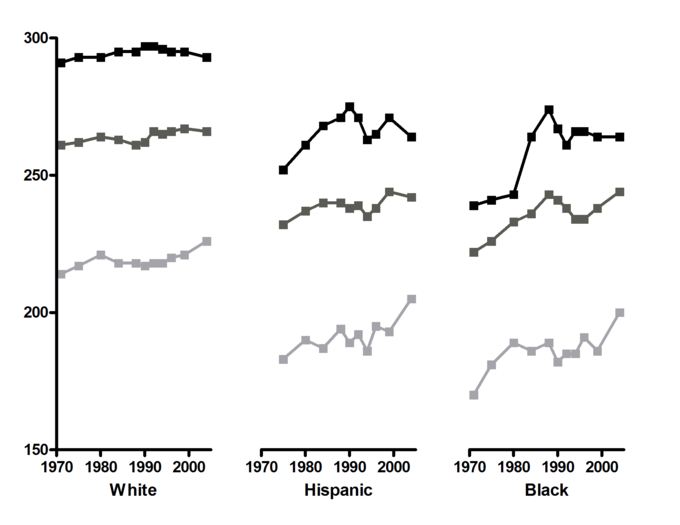 Trends in reading scores by race, 1970–2004: Reading- ages 9 (light gray), 13 (dark gray), and 17 (black). Trends in reading scores collected by the National Assessment of Educational Progress (NAEP), with the light-gray line indicating data collection at age 9, dark-gray at age 13, and black at age 17. White, hispanic, and black students all improved their reading scores as they aged. Notably, however, the achievement gap between white vs. black and hispanic students has narrowed over time but has by no means disappeared; white students still show the highest achievement in reading.