The idea of congressional term limits has become a resounding cry in American politics. Amid hyper- partisanship and the resulting political gridlock, many have pointed to congressional term limits as the cure-all for the ills of government stalemate. What would be the net gains and losses for the American people under such a system? To answer this question, it is important to weigh the practical judgement of the Framers on this matter. 1

Looking at Federalist No. 72 , Alexander Hamilton (1788) argued that people take more interest in their jobs with knowledge that in doing so, they will be rewarded. So, if members of Congress recognize that they must leave office at a designated time, they are, then, less apt to take their jobs seriously. 46 Thus, in the interest of the electorate, congressional term limits were purposefully nixed in favor of a working body of legislators whose reelection would serve as the impetus for both public approval and personal fulfillment. 1

Hamilton (1788) opined that term limits entice politicians toward corruption. With an understanding that they will ultimately be stripped of their positions, congressmen are likely to be swayed in the direction of bribery and other forms of fraud. 46 This argument is, perhaps, the most ineffective of Hamilton’s reasoning. Historically, congressional term limits have not prevented instances of corruption. From the Credit Mobilier scandal of 1867 to the likes of Jack Abramoff in 2005, Congress has had its fair share of deceit in spite of the stability of unlimited terms. 1

Hamilton (1788) maintained that “experience is the parent of wisdom.” 46 As such, congressional term limits present as an extreme challenge to a skilled body of legislators. Without much needed political know-how, the community at large is at a severe disadvantage in terms of political tradeoffs between government institutions and the public. 1

Another negative effect of term limits comes in the form of crisis leadership. National catastrophes are not only common, but, likewise, inevitable. 46 Thus, there is a need for capable management to handle such setbacks. The reelection of Franklin Roosevelt in 1940 drives home Hamilton’s point here. Elected just after the breakout of World War II, FDR’s continued presence maintained constancy during a time when the nation was set afloat by a second world war. Would it have been wise to limit his eligibility to continue as president at such a critical time? The short answer is no, and the same rationale can, likewise, be applied to members of Congress.

The Constitution of 1788 can be summed up with one word: “stability.” The lack of congressional term limits reflects this description well. 1 According to Hamilton (1788), the near permanency of legislators not only preserves the legitimacy of law, but, likewise, acts as a defense against impetuous policy that could come as a result of frequent changes in congressional makeup. 46 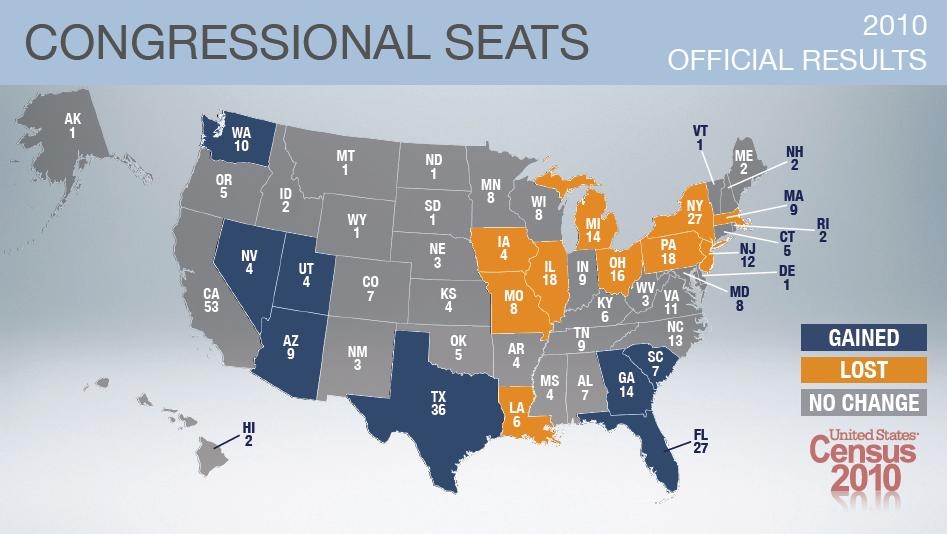 2010 Census Reapportionment by United States Census 2010 is under Public Domain.

The theory of descriptive representation holds that the make-up of Congress should reflect the diversity observed within the American electorate, which includes differences in race, gender, sexuality, etc. On the other hand, substantive representation counters with the belief that representation should center around ideology versus demography, or simply put, representation and/or voting should be premised upon the “issue” alone. While it could be said that Congress simultaneously embodies both models of representation—especially, when we consider that the current, 115th Congress represents the most diverse body of legislators in U.S. history—disparities in representation, however, still persist:

To some, this data means that many members of Congress are not fit to adequately represent the interests of the average citizen, but from the glass-half-full perspective, this information is quite telling. In terms of gender, a 20 percent showing of women in Congress is promising when we consider that women only gained the right to vote in 1920 with the passage of the 19th Amendment, less than a century ago, in a nation that is nearly two and-a-half centuries old.

Further, after the complete marginalization of African-Americans through slavery, and their political disenfranchisement in the era of Jim Crow, a 9.6 percent standing—in terms of overall representation—is not too shabby, especially when we consider that African-Americans have only been seated at the “political” table for the last fifty years; though, like other areas of minority representation, there is still much work to be done in order to transform Congress into the image of the American electorate. Projected changes in the nation’s population, though, is encouraging in this regard. 1 The House Democratic Women of the 115th Congress by Office of Nancy Pelosi is in the Public Domain.