In one of the scenarios the participants were asked if they would be willing to kill one person in order to prevent five other people from being killed. As you can see in Figure \(\PageIndex{14}\), they found that the individuals with lesions in the frontal lobe were significantly more likely to agree to do the harm than were individuals from the two other groups. 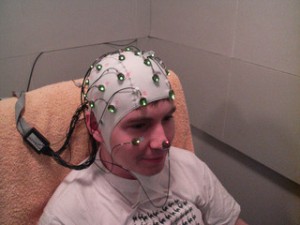 Very clear and detailed pictures of brain structures (see, e.g., Figure \(\PageIndex{16}\)) can be produced via fMRI. Often, the images take the form of cross-sectional “slices” that are obtained as the magnetic field is passed across the brain. The images of these slices are taken repeatedly and are superimposed on images of the brain structure itself to show how activity changes in different brain structures over time. When the research participant is asked to engage in tasks while in the scanner (e.g., by playing a game with another person), the images can show which parts of the brain are associated with which types of tasks. Another advantage of the fMRI is that is it noninvasive. The research participant simply enters the machine and the scans begin.