The quantile-quantile or \(q-q\) plot is an exploratory graphical device used to check the validity of a distributional assumption for a data set. In general, the basic idea is to compute the theoretically expected value for each data point based on the distribution in question. If the data indeed follow the assumed distribution, then the points on the \(q-q\) plot will fall approximately on a straight line.

Before delving into the details of \(q-q\) plots, we first describe two related graphical methods for assessing distributional assumptions: the histogram and the cumulative distribution function (CDF). As will be seen, \(q-q\) plots are more general than these alternatives.

As an example, consider data measured from a physical device such as the spinner depicted in Figure \(\PageIndex{1}\). The red arrow is spun around the center, and when the arrow stops spinning, the number between \(0\) and \(1\) is recorded. Can we determine if the spinner is fair? Figure \(\PageIndex{1}\): A physical device that gives samples from a uniform distribution

If the spinner is fair, then these numbers should follow a uniform distribution. To investigate whether the spinner is fair, spin the arrow \(n\) times, and record the measurements by \({\mu _1, \mu _2, ..., \mu _n}\). In this example, we collect \(n = 100\) samples. The histogram provides a useful visualization of these data. In Figure \(\PageIndex{2}\), we display three different histograms on a probability scale. The histogram should be flat for a uniform sample, but the visual perception varies depending on whether the histogram has \(10\), \(5\), or \(3\) bins. The last histogram looks flat, but the other two histograms are not obviously flat. It is not clear which histogram we should base our conclusion on.

Alternatively, we might use the cumulative distribution function (CDF), which is denoted by \(F(\mu )\). The CDF gives the probability that the spinner gives a value less than or equal to \(\mu\), that is, the probability that the red arrow lands in the interval \([0, \mu ]\). By simple arithmetic, \(F(\mu ) = \mu\), which is the diagonal straight line \(y = x\). The CDF based upon the sample data is called the empirical CDF (ECDF), is denoted by \(\widehat{F}_n(u)\), and is defined to be the fraction of the data less than or equal to \(\mu\); that is,

In general, the ECDF takes on a ragged staircase appearance.

For the spinner sample analyzed in Figure \(\PageIndex{2}\), we computed the ECDF and CDF, which are displayed in Figure \(\PageIndex{3}\). In the left frame, the ECDF appears close to the line \(y = x\), shown in the middle frame. In the right frame, we overlay these two curves and verify that they are indeed quite close to each other. Observe that we do not need to specify the number of bins as with the histogram.

Figure \(\PageIndex{3}\): The empirical and theoretical cumulative distribution functions of a sample of \(100\) uniform points

The \(q-q\) plot for uniform data is very similar to the empirical CDF graphic, except with the axes reversed. The \(q-q\) plot provides a visual comparison of the sample quantiles to the corresponding theoretical quantiles. In general, if the points in a \(q-q\) plot depart from a straight line, then the assumed distribution is called into question.

Consider a small sample of \(5\) numbers from the spinner:

Figure \(\PageIndex{4}\): The theoretical and empirical CDFs of a small sample of \(5\) uniform points, together with the expected values of the \(5\) points (red dots in the right frame)

In general, we consider the full set of sample quantiles to be the sorted data values

We are now prepared to define the \(q-q\) plot precisely. First, we compute the n expected values of the data, which we pair with the n data points sorted in ascending order. For the uniform density, the \(q-q\) plot is composed of the \(n\) ordered pairs

In fact, the data were generated in the \(R\) language from beta distributions with parameters \(a = b = 3\) on the left and \(a = b =0.4\) on the right. In Figure \(\PageIndex{8}\) we display histograms of these two data sets, which serve to clarify the true shapes of the densities. These are clearly non-uniform.

These n ordered values will play the role of the sample quantiles.

Let us consider a sample of \(5\) values from a distribution to see how they compare with what would be expected for a normal distribution. The \(5\) values in ascending order are shown in the first column of Table \(\PageIndex{2}\). Figure \(\PageIndex{9}\): Example of the Inverse Normal Calculator for finding a value of the expected quantile from a normal distribution

Figure \(\PageIndex{10}\): The empirical CDF of a small sample of \(5\) normal points, together with the expected values of the \(5\) points (red dots in the right frame)

As before, a normal \(q-q\) plot can indicate departures from normality. The two most common examples are skewed data and data with heavy tails (large kurtosis). In Figure \(\PageIndex{12}\), we show normal \(q-q\) plots for a chi-squared (skewed) data set and a Student’s-\(t\) (kurtotic) data set, both of size \(n = 1000\). The data were first standardized. The red line is again \(y = x\). Notice, in particular, that the data from the \(t\) distribution follow the normal curve fairly closely until the last dozen or so points on each extreme.

q-q plots for normal data with general mean and scale

Our previous discussion of \(q-q\) plots for normal data all assumed that our data were standardized. One approach to constructing \(q-q\) plots is to first standardize the data and then proceed as described previously. An alternative is to construct the plot directly from raw data.

In this section, we present a general approach for data that are not standardized. Why did we standardize the data in Figure \(\PageIndex{12}\)? The \(q-q\) plot is comprised of the \(n\) points

If the original data {\(z_i\)} are normal, but have an arbitrary mean \(\mu\) and standard deviation \(\sigma\), then the line \(y = x\) will not match the expected theoretical quantiles. Clearly, the linear transformation

the normal \(q-q\) plot would consist of the n points

Instead of plotting the line \(y = x\) as a reference line, the line

The SAT case study followed the academic achievements of \(105\) college students majoring in computer science. The first variable is their verbal SAT score and the second is their grade point average (GPA) at the university level. Before we compute inferential statistics using these variables, we should check if their distributions are normal. In Figure \(\PageIndex{13}\), we display the \(q-q\) plots of the verbal SAT and university GPA variables. 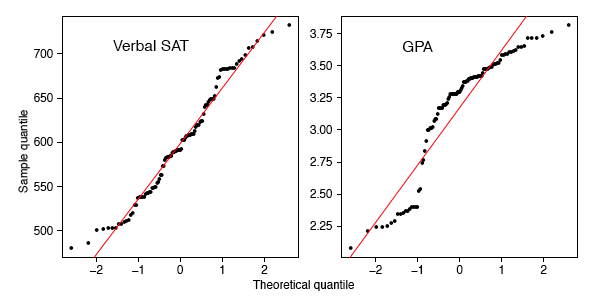 The verbal SAT seems to follow a normal distribution reasonably well, except in the extreme tails. However, the university GPA variable is highly non-normal. Compare the GPA \(q-q\) plot to the simulation in the right frame of Figure \(\PageIndex{7}\). These figures are very similar, except for the region where \(x\approx -1\). To follow these ideas, we computed histograms of the variables and their scatter diagram in Figure \(\PageIndex{14}\). These figures tell quite a different story. The university GPA is bimodal, with about \(20\%\) of the students falling into a separate cluster with a grade of \(C\). The scatter diagram is quite unusual. While the students in this cluster all have below average verbal SAT scores, there are as many students with low SAT scores whose GPAs were quite respectable. We might speculate as to the cause(s): different distractions, different study habits, but it would only be speculation. But observe that the raw correlation between verbal SAT and GPA is a rather high \(0.65\), but when we exclude the cluster, the correlation for the remaining \(86\) students falls a little to \(0.59\).

Figure \(\PageIndex{14}\): Histograms and scatter diagram of the verbal SAT and GPA variables for the \(105\) students.

Parametric modeling usually involves making assumptions about the shape of data, or the shape of residuals from a regression fit. Verifying such assumptions can take many forms, but an exploration of the shape using histograms and \(q-q\) plots is very effective. The \(q-q\) plot does not have any design parameters such as the number of bins for a histogram.

In an advanced treatment, the \(q-q\) plot can be used to formally test the null hypothesis that the data are normal. This is done by computing the correlation coefficient of the \(n\) points in the \(q-q\) plot. Depending upon \(n\), the null hypothesis is rejected if the correlation coefficient is less than a threshold. The threshold is already quite close to \(0.95\) for modest sample sizes.

We have seen that the \(q-q\) plot for uniform data is very closely related to the empirical cumulative distribution function. For general density functions, the so-called probability integral transform takes a random variable \(X\) and maps it to the interval (\(0, 1\)) through the CDF of \(X\) itself, that is,

which has been shown to be a uniform density. This explains why the \(q-q\) plot on standardized data is always close to the line \(y = x\) when the model is correct.

Finally, scientists have used special graph paper for years to make relationships linear (straight lines). The most common example used to be semi-log paper, on which points following the formula \(y=ae^{bx}\) appear linear. This follows of course since \(log(y) = log(a) + bx\), which is the equation for a straight line. The \(q-q\) plots may be thought of as being “probability graph paper” that makes a plot of the ordered data values into a straight line. Every density has its own special probability graph paper.