Old World monkeys (OWMs) are found in sub-Saharan Africa, southern Asia, and northern Japan. They live in a wide variety of habitats, from tropical jungle to seasonal snow and savannas. Some are arboreal and others terrestrial. There is variety of group structure, but most live in diurnal multi-male, multi-female groups. The traits that unite OWMs are: All OWMs belong to the family Cercopithecidae. They are divided into two subfamilies: Cercopithecinae, monkeys with cheek pouches, and Colobinae, monkeys who are predominately leaf-eaters. There are eighteen genera and about ninety species of OWMs. The largest number of OWM species belong to the Cercopithecinae and include the following genera: There are a number of semi-terrestrial cercopithecines, e.g., baboons, who spend their days foraging in the grasslands and sleep either on cliff-faces or in trees. These semi-terrestrial OWMs exhibit significant sexual dimorphism. Canine teeth are large and sharp; this is beneficial for eating but also for defense against rivals and predators. Ischial callosities are present on the ground-dwelling species. Their faces are bereft of fur except for perhaps a beard-like tuft on the chin. Some have interesting coloration of the face or genitals. Male mandrills (pictured above) have the most conspicuous coloring on their faces and rumps, in addition to their penises, which are bright red. Cercopithecines have elongated snouts with the OWM characteristic noses with nostrils that are narrow and set close together. Cercopithecines vary in size from the smallest at close to three pounds (Miopithecus talapoin) to the largest, the male mandrill (Mandrillus sphinx), at about forty-eight pounds. The smaller cercopithecines spend more time in trees than the large cercopithecines. They inhabit a wide-range of environments, from tropical rainforests, e.g., talapoins and mangabeys, to semi-arid deserts, e.g., chacma baboons (Papio ursinus), and even areas with seasonal snow, i.e., Japanese macaques (Macaca fuscata. In fact, Japanese macaques have an interesting cultural adaptation to living in a cold, snowy region…they hang out in hot springs. Most cheek-pouched monkeys are omnivorous, eating seeds, fruits, leaves, spiders, insects, and even small vertebrates. All cercopithecines live in large multi-male, multi-female groups or single-male, multi-female groups, with bachelor groups forming at times as they migrate from their natal groups. Most females have visible estrus, making it easy for males to tell when the female is fertile. The only species with no to little visible estrus are long-tailed macaques, forest-living guenons, and some mangabeys. Females typically give birth to one offspring at a time. 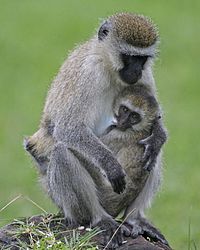 The Colobinae are quadrupedal folivores, including the colobus monkeys, langurs, and odd-nosed monkeys. There are ten different genera with long tails and various fur coloration: Most are arboreal and are found in rainforests, mountain forests, savannas, and mangroves. Because of their leafy diet, colobines have multi-chambered, or sacculated, stomachs to break down plant cellulose into useable calories, and long intestines to increase the absorption of nutrients. They are the only ruminant primates. Colobines are smaller than many of the cercopithecines, weighing from about 10 to 34 pounds. They have short snouts in comparison to the cercopithecines and have teeth that are adapted for shearing leaves. Their legs are somewhat longer than their arms. Colobus monkeys have a vestigial thumb, making fine manipulation of objects impossible. They have little to no hair on their faces other than tufts on the cheeks or chin. All except the snub-nosed monkey have long tails that are used to balance when moving. There is variety in group composition. Multi-male, multi-female groups or single-male, multi-female groups are common; monogamy is rare. Bachelor groups may form as males migrate from their natal group. Females usually give birth to one offspring at a time. During estrus, females have visible menstrual bleeding. 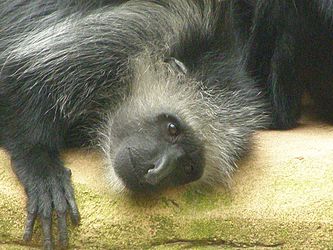